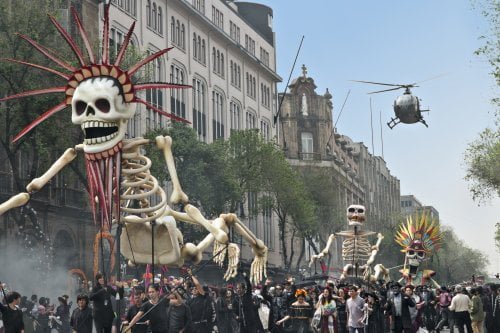 James Bond (Daniel Craig) is back and the super spy faces the greatest challenge of his career. MI6 is in shambles and the new head of Britain’s Joint Intelligence Service, C (Andrew Scott), dismantles the fallen spy organization, including the 00 program - permanently. But, another super-criminal syndicate has reared its head and Bond must go undercover to get inside “Spectre.”

'The dead are alive' proclaims a title card as all the villains and loved ones of the Daniel Craig iteration of James Bond appear in the inky opening credits. In case we haven't gotten the point, we land in Mexico City during Day of the Dead festivities where Bond has gone rogue, intent on killing Marco Sciarra (Alessandro Cremona) for reasons which he eventually shares with Moneypenny (Naomie Harris) in "Spectre." With the director (Sam Mendes) and screenwriting team (John Logan, Neal Purvis, Robert Wade plus "Black Mass's" Jez Butterworth) behind "Skyfall," what could go wrong with "Spectre?" A lot, as it turns out. The film isn't without its pleasures. There's the spectacular opening scene which features the only fresh stunt as Bond gets into hand-to-hand combat with a helicopter pilot as his vehicle gyrates through the air over a crowded city plaza and its a kick to see Bond's usually office bound colleagues take to the streets, especially Ben Wishaw's adorable Q. But as the villain, Christoph Waltz's schtick has passed its expiration date, just as Craig has maybe outgrown Bond - he looks worn down here, not even flinty enough to spark romantic heat with costar Léa Seydoux ("Blue Is the Warmest Color"). The film's big 'twist' has already been guessed by most. Although "Spectre" is tying up the loose ends of Bond's past from "Skyfall," much of the film repeats Bondian bits from cinema's longest running franchise. While Bond cavorts with Sciarra's widow (Monica Bellucci, who although met in fear for her life is dropped from the film without another mention) in Mexico, the new M (Ralph Fiennes) is fighting for the double-0 organization's very existence back in London where the ruins of MI6 are a black hole in the city's skyline. The screenwriters try to keep things relevant with M promoting the value of his shadowy assassins over the global high tech surveillance cartel being instituted by his new boss C (Andrew Scott, "Jimmy's Hall"), whose very manner marks him for a comedown. Cinematographer Hoyte Van Hoytema ("Her") offers an incredible long tracking shot at the outset before following the action from Rome to the Austrian Alps and North African desert, but his palette is missing the rich vitality the great Roger Deakins brought to "Skyfall." Sam Smith's 'Writing's on the Wall' theme also suffers in comparison to the last outing's Adele single. Bond's big moment with Oberhauser (Waltz) is one big letdown, the villain's dastardly torture device making not a lick of difference to Bond's abilities. As heavy Hinx, Dave Bautista brings the brawn, but none of the personality he exhibited in "Guardians of the Galaxy." "Spectre" is certainly better than Craig's second outing, "Quantum of Solace," but it's pretty much business as usual just when the ante should be upped. Grade:

Nothing I say, positive or negative, about “Spectre” is going to make one whit of difference to the legion of James Bond fans out there. With this, the 24th official 007 film in the franchise that spans over 60 years, the fans will get more of the same – high-energy action, high-tech shootouts, lots of gadgets, great stunts and an Aston Martin DB10 especially built for the film. With so much familiar stuff going on, director Sam Mendez and, with a battery of four credited scripters (John Logan, Neal Purvis. Robert Wade, Jez Butterworth), does not clutter the copious action with a coherent story. The film begins with now-rogue spy Bond hunting his nemesis, Marco Sciarra (Alessandro Cremona), during the Day of the Dead parade in Mexico City – this extended action sequence takes nearly 15 minutes before the first titles begin. The rest of the film is a series of action scenes tied together with a story involving Franz Oberhauser (Christoph Waltz, giving his typical one-note performance), AKA as another familiar Bond bad guy from the past. Oberhauser is the ruthless head of a crime organization set on world domination called Spectre. James is on the outs with his boss M (Ralph Fiennes) and must secretly enlist Moneypenny (Naomie Harris) and Q (Ben Whishaw) to save the good name of MI6 – and Dr. Madeleine Swann (Lea Seydoux), the beautiful daughter of a respected former foe of 007. But, plot is incidental to “Spectre.” Action is the reason we are here. At just shy of two-and-a-half hours, I did not find myself checking the time along the way, a good thing for someone to whom the glitter of a new James Bond film had faded long ago. It feels like an extended action video game but the money spent on all of that action and stunts is up there on the screen. Fans will flock to “Spectre,” which is a must for a film reportedly costing upwards to $300000000.