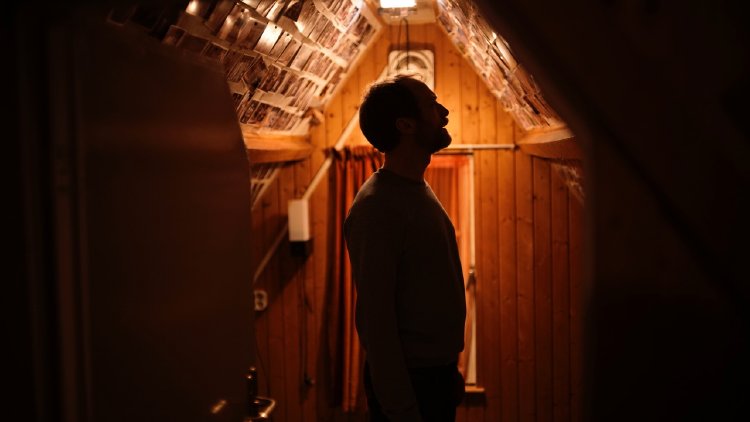 At a Tuscan resort, Danish couple Bjørn (Morten Burian) and Louise (Sidsel Siem Koch) find Dutch vacationer Patrick (Fedja van Huêt) slightly intrusive, but he ends up charming them with a self-effacing and humanity embracing toast at dinner.  Bjørn is startled by how his own self worth inflates when Patrick describes Bjørn’s retrieval of his daughter Agnes’ (Liva Forsberg) stuffed rabbit Ninus as ‘heroic,’ so it is not surprising when he is more receptive than his wife when they receive a postcard from the near strangers inviting them for a weekend in the Dutch countryside in “Speak No Evil.”

This Danish/Dutch coproduction from cowriter (with brother Mads)/Christian Tafdrup is a frustratingly flawed but thought provoking analysis of a victim’s culpability in his own fate.  While the Danish couple eventually calls out their hosts’ microaggressions and downright disturbing behavior, their backing down to wounded explanations from the Dutch stretches credulity, conflict avoidance taken to ridiculous extremes.  And yet, this is a film that is difficult to shake off, the Tafdrups exploring a singular aspect of human behavior that has far-reaching implications.  During the film’s shockingly brutal climax, one which features a particularly chilling line of dialogue, one might begin to reflect upon “Salo, 120 Days of Sodom.”

After experiencing the other worldliness of a Tuscan vacation and the normality of a Danish suburban household, Bjørn and Louise’s approach to Patrick and Karin’s (Karina Smulders) home is through a winding road in the woods to a wooden chalet nestled within.  It is a storybook setting, but more the witch’s cottage from Hansel & Gretel than seven dwarves’ in Snow White.  Upon entering Louise exclaims at its coziness only to be informed by Karin that Patrick has been cooking all day – boar stew - after Louise’s veganism had been much commented upon and commended by their host in Italy.  Louise will also be alarmed to see the ‘little bed’ that has been prepared for Agnes on the floor of Patrick and Karin’s son Abel’s (Marius Damslev) room, the little boy described as ‘being so excited’ at the prospect of Agnes’ visit glum and withdrawn.  He’s an unsettling presence, as felt when Bjørn is ‘caught’ snooping around outside.  The little boy opens his mouth into a gaping maw, exposing the fact that he has no tongue.

This disturbing discover is explained away as the boy having congenital aglossia, a rather large oversight, especially after a number of other explanations for his lack of speech.      The oddities and oversteps escalate dramatically until, after ignoring Agnes’s cries in the night while lovemaking, Louise gets up to discover her in the nude and sleeping Patrick and Karin’s bed.  She decides they must leave now, but while they are successful in quietly slipping away, the absence of Ninus will once again call upon Bjørn’s chivalry.

Burian and Koch are blandly believable as the couple choosing politeness over behavioral red flags, Burian shading Bjørn’s ego into complicity in endangering their safety over Koch’s maternal instincts, which still must be prodded into the open when he declines to act forcefully.  Real marrieds Huêt and Smulders generate more heat as a couple, aiding in the discomfort they create as they adjust their aggressions from a simmer to a boil and back again.  The Dutch couple’s end game is horrifying, recalling the 2007 real life experience of a British couple on vacation in Portugal, but once again the filmmakers force a character to behave stupidly in the face of blatant evidence in order to cross their finish line.  Yet even after screaming at the unfathomable choices being made on screen, the fate of the Danes is all too bone-chillingly plausible, the filmmakers thesis all too well presented.

Danish couple, Bjorn (Morten Burian) and Louise (Sidsel Siem Koch), on vacation with daughter Agnes (Liva Forsberg), meet a nice Dutch family and hit it off. A few weeks later, they get an invite to visit Patrick (Fedja van Huet) and Karin (Karina Smulders) at their home. But, things get strange right away in “Speak No Evil.”

I think I know what director Christian Tafdrup (who co-wrote the script with Mads Toldrup) is trying to do in this psychological drama of dominance and control and something quite wicked. But, when we first meet the two families, it is all innocence and fun. When Louise tells the other couple that she is a vegetarian, Patrick praises her with “That’s heroic.”

Then, Bjorn and Louise get the invitation from Patrick to come visit for the weekend. This is when things and tables change and the tensions start. And, this is where I parted ways with weak-kneed Bjorn. Right from the start, I could not identify with the Dane’s responses to what I can only call Patrick’s increasing badgering and bullying.

I think that I should identify with the protagonists and not the villain. Here, I could not side with any of the adults depicted. They are either spineless, like Bjorn, or just selfishly evil, like Patrick. The rest of the players are just pawns in this unbalanced battle of wills.