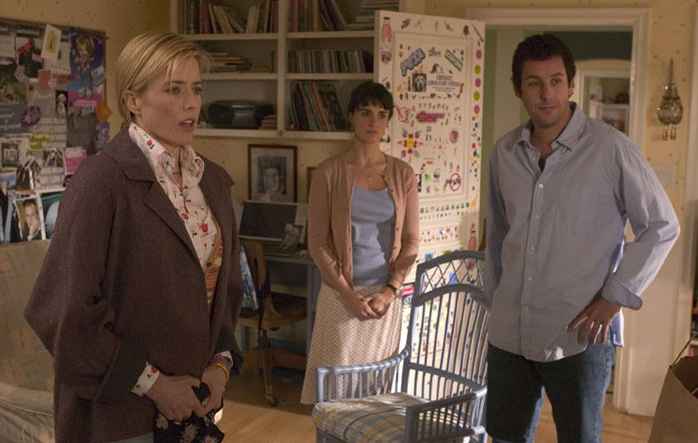 Flor (Paz Vega) wants her daughter Christina (Shelbie Bruce) to live the American dream and moves from Mexico to East LA. She yearns for her daughter to get an education but does not want to learn English, herself, and is happy to live in the barrio. But, she needs money to survive and takes a housekeeping job with the Clasky family, a decision that will affect them all in “Spanglish.”

It has been seven years since director/writer James L. Brooks had a box office hit with his Oscar-winning “As Good as It Gets.” He returns to the screen with hopes for another smash hit, this time with heavy hitter Adam Sandler in tow. When Flor agrees to go on a job interview with her English-speaking cousin, she isn’t ready for Deborah Clasky (Tea Leoni), a high powered, ambitious exec who lost her job to downsizing four months before. The now unemployed, and hyperactive, mother of two has time on her hands to spare but, on the spur of the moment, hires Flor to take care of the Clasky household. She meets their children, Bernice (Sarah Steele) and Georgie (Ian Highland), and grandmother Evelyn (Cloris Leachman) and is immediately aware of the pressure Deborah exerts upon her slightly chubby daughter to lose weight. John Clasky (Adam Sandler) was a much sought after chef in New York who relocated to LA to open his own restaurant. He has been working hard to make the business and has left Deborah to her obsessive ways and Bernie to bear the brunt of those ways. He is also (like every other man whom she meets) struck by Flor’s beauty and gentle nature and is attracted to her against his husbandly will. Things get further complicated in the Clasky household when Flor is forced to bring pretty, petite Christina into the picture and Deborah has a new object for her manic obsessions. Things are on an emotional collision course for all. Brooks almost succeeds with his clash of cultures flick that is just a little too extreme to work well. The main problem is the characters and the relationship between John and Deborah. There isn’t much in the way of back-story to gives us a clue what Deborah was before she became an unemployed haus frau but, frankly, she is an unlikable person. She obsesses over her physical condition, a runner who vigorously shouts “Left!” as she blasts by everyone else; she berates her daughter for her weight problem constantly - for her own good she contends - and, she goes into high low-self-esteem mode when she tries to take over raising and befriending the impressionable Christina. Deborah is too unpleasant and manically obsessive to evoke any empathy, even when you know it should. Tea Leone, to her credit, took the character to the edge. I understand what Brooks was going for in this modern culture clash, especially with the introduction of Paz Vega as Flor. The Spanish actress is a world-class beauty and brings this, plus grace, poise and charm that are more than just a character contrast to the manic Deborah. Flor. She is a determined, sometimes unsure, woman who takes to heart the Clasky family’s problems and tries to help. There is also a nicely rendered chaste romance built within the story fabric making any guy want to be in John’s shoes. Adam Sandler foregoes his usual slapstick, loud, frequently violent persona and gives a passably sensitive performance as John Clasky. He is a melancholy man as he builds his new restaurant to the point where New York’s top food critic comes cross-country to review the upscale eatery. Sandler has a nice soliloquy where he eloquently expresses his desire to not get a four-star rating but three-and-a-quarter stars so he can keep the neighborhood atmosphere that he loves so well. My problem with John, given his warm, loving, laidback nature, is why would he ever be attracted to even a tempered down Deborah in the first place? The Claskys, as a couple, do not make sense. On the supporting cast front are three charming performances: Cloris Leachman is introduced as an old-time club singer whose tippling has become a way of life and she wallows in her past music glory by teaching grandson Georgie her old tunes. Evelyn goes through an arc of change from her comic relief drunkard to sober sage and Leachman makes her a 3D person. The youngsters get there due, too, as Sarah Steele’s Bernice must contend with her mother’s compulsive behavior and her obsession with Christina. Bernie is wise beyond her years, a fact that Flor, alone, sees and she encourages the youngster. Steele evokes sympathy and hope for her Bernie. Shelby Bruce, as Christina, makes a sparkling intro as the bright youngster who is tempted by the America Dream riches that Deborah promises - $20K private school scholarship and other perks - but must also succumb to her mother’s rigid controls. She has her best and funniest moments as the translator for her mom and the Claskys. Techs have TV sitcom qualities that are unremarkable except John Seale’s camera as his lens lingers lovingly on Vega, using her beauty to advantage with his copious closeup. Brooks’s study in contrast would have been better handled if he reigned in Deborah’s low self-esteem fueled manic nature. He gets a gentler performance from Sandler, a side we don’t see too often. Kudos to the filmmakers for introducing the lovely Paz Vega (“Sex and Lucia”) to mainstream American movies.