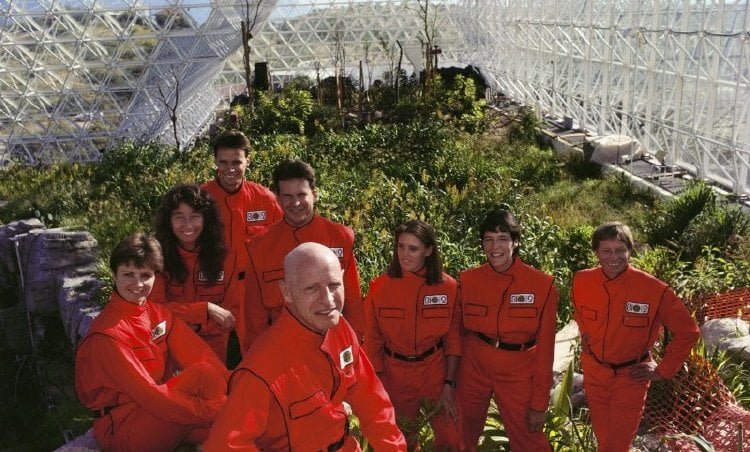 In 1991, eight people representing different areas of expertise entered a massive biodome called BIOSPHERE 2 (the earth itself being biosphere 1) as an experiment in recreating sustainable life outside of earth’s atmosphere.  Their story was followed globally, attracting so many tourists a visitor center was opened.  But when one member accidentally caught her hand in a thresher and it was decided to temporarily remove her for surgery, two duffel bags she reentered with began a storm of controversy that never abated for “Spaceship Earth.”

How synergistic that the group who founded Synergia Ranch in New Mexico would have a documentary about them released during a pandemic requiring people to live much like the Biospherians who lived their most (in)famous project.  The title refers to the countercultural book ‘Operating Manual for Spaceship Earth’ by Buckminster Fuller, one of many people who entered the orbit of John Allen, the charismatic leader who first drew people together in 1960’s San Francisco to form the Theater of All Possibilities.

Theatrics would remain a distinct part of this group, a play even being written and performed humorously predicting the failure of BIOSPHERE 2, but when the San Francisco scene started turning into an ugly tourist attraction, Allen and his group moved on to found their ranch, another experiment in sustainability where original members still reside today.  It was here that they first built Buckminster Fuller’s geodome.  The teenaged Margaret Augustine emerged as the group’s chief architect, leading their next effort building the ocean worthy ship Heraclitus.  As they sailed around the world, they formed various local companies to pull in income, all under Allen’s leadership.  It was during this time that a partnership was formed with Ed Bass, the most idiosyncratic member of a billionaire Texas oil family who would be instrumental in launching their more famous endeavor – and also in its destruction.  Who does he bring aboard?  Steve Bannon.  Yes, *that* Steve Bannon.

Director Matt Wolf ("Teenage," "Recorder: The Marion Stokes Project") was astonished to discover that Allen’s group had documented everything when he visited Synergia Ranch, and so is blessed with all manner of archival footage.  Considering the vast cast of characters and their seemingly impossible number and variety of projects, that could have been a curse as well, but Wolf delivers a vast amount of information concisely and clearly, utilizing such folks as early member Marie Harding, who would marry Allen (she describes the marriage as a friendship that became a partnership) and become the CFO of BIOSPHERE 2, as narrators.  Desert specialist Dr. Mark Nelson and botanist Linda Leigh describe the almost biblical effort that went into traveling the world to bring back specimens to recreate such things as a rainforest and even an ocean with a living coral reef.

The documentary is an awe-inspiring account of what can be accomplished when humans cooperate on a common cause, but it also shows how personality conflicts and corporate interests interfere.  Many accused Allen, who insisted on carrying on with BIOSPHERE 2 even as its inhabitants suffered from an unexpected lack of oxygen, of leading a cult.  Yet we hear from Dr. Tony Burgess, who publicly criticized him at a crucial moment, talk about how he was welcomed back into the fold by an appreciative Allen.

“Spaceship Earth” holds an incredible, decades long journey taken by an impressive and unique cast of characters.  Go along for the ride.

Think back about 30 years to 1991 and you may remember a utopian project called Biosphere 2 where eight stalwart “biosherians” spent two years in a diverse, environmentally-sealed facility. Their mission, initially, was to prove the viability of a closed ecologically self-sufficient system for space travel and, more important, to help save “Spaceship Earth.”

Veteran documentary filmmaker Matt Wolf delves into what was, to me way back when, a really cool science experiment. Wolf and his team assemble a mass of archival footage that chronicles the project from its early beginnings through the conclusion of the grand experiment two years after its official launch.

This noble experiment had its roots back in the 1960s when dreamer John Allen had the first inkling to duplicate Biosphere One (the Earth) and the first seeds of the project found root. Jump ahead to the 80s and billionaire philanthropist Ed Bass provides $150 million in funding to launch the ambitious endeavor into reality.

The film succinctly documents the history of the project from those early hippie days through the research, development and construction of Biosphere 2. Then, the focus of the film shifts to the project its as the biosherians take the challenge to create an independent, closed and self-sufficient world on our own.

Of course, the grand experiment has its share of problems – miscalculations in design and planning, systemic failure (at one point, oxygen had to be added from the outside, “violating” the self-sufficiency of the colony), human conflicts and factionalism, negative press, an emergency evacuation, failed crops, inset pest infestation, etc. – but they hanged in there for the two year span of the experiment.

The thing I love about good documentaries is they do the three things: educate, entertain and expand your mind. “Spaceship Earth” (the title is borrowed from Buckminster Fuller’s 1968 book, Operating Manual for Spaceship Earth) does all of those things and gives hope to the utopian in me.

"Spaceship Earth" is showing at the virtual cinemas listed here.