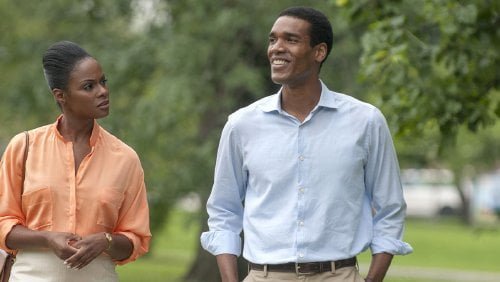 Michelle Robinson (Tika Sumpter) is a second year associate in a prestigious Chicago law firm. She accepts an invitation to attend a local event from first year associate Barak Obama (Parker Sawyers), but insists that it is not a date. Throughout the course of the day, he charms her with his intelligence and wit, hoping that she will change her mind in “Southside with You.”

As Michelle Robinson (Tika Sumpter, "Ride Along") prepares herself for the day, her mother (Vanessa Bell Calloway, "Coming to America") teases her about the man she'll be meeting. 'I always like to look nice,' she replies, stressing that the first year law associate she's advising at her firm has invited her to a community meeting, not on a date. But Barack Obama (Parker Sawyers, "Zero Dark Thirty") is determined to break through Michelle's guarded propriety in "Southside With You." For his feature debut, writer/director Richard Tanne charts the beginning of not only a love story, but the genesis of the nation's first couple. Reconstructing events from public accounts (everything in the film happened with the exception of the community meeting which occurred later), Tanne has written dialogue that gets to the essence of the Obamas as we know them, each giving the other cause for a strong bit of introspection. Those who admire the couple will surely love this movie, others may at least recognize the insight Tanne's brought to their early relationship. Sawyers, who bears an uncanny resemblance to Obama, so slips into his skin and vocal cadence you may forget you're watching an actor. Michelle and Barrack are introduced as people with close ties to family, Michelle still living at home to help with her dad (Phillip Edward Van Lear, "Barbershop 2: Back in Business") as his MS progresses, Barrack on the phone with his grandmother as he surveys himself in his bathroom mirror. Barrack, blaring music and smoking cigarettes, travels to Michelle's Southside neighborhood in a yellow two-door Nissan Sentra that's seen better days. When he arrives, his breath spray doubles as an air freshener. Michelle gets in, a panicky look crossing her face as she sees the road through the gaping hole in the car's floor. Michelle is aghast when Barrack suggests they hit the Afrocentric art exhibit at Chicago's cultural center as the meeting he invited her to doesn't start for a few hours. She's fought too hard as a woman to get to her position, doubly hard as a black woman, and doesn't want to risk any whiff of impropriety. The this-is-not-a-date argument begins in earnest. But she relents and the conversation that begins exposes the potential bond between these two intellectually and civic-minded people. Obama recognizes an Ernie Barnes work and spins the tale of how he first connected with the man's art through 'Good Times.' They gaze at the famous Tiffany dome, then move on to a picnic. Barrack gazes in awe as Michelle joins a group of kids dancing to African drummers. That community meeting at Altgeld Gardens shows us Barrack the orator as its current leader (Jerod Haynes) gives the floor to the former. The man turns a negative situation into a positive while 'Barrack's woman' is regaled with stories of his influence. She smells a set-up, but cannot help but be impressed, agreeing to continue 'to hang,' a couple of beers followed by the movie Barrack's been dying to see, Spike Lee's 'Do the Right Thing.' A chance meeting with their boss, Avery Goodman (Tom McElroy), outside the theater both confirms and invalidates Michelle's concerns. There are two crucial pivots during the film. When Barrack suggests Michelle's career track may not be fulfilling her, she bristles at his judgement, but begins to think. The family-oriented young woman keeps asking about his parents, and while he only has the best things to say about his white mother, he's bitter discussing his Kenyan father (they looked like Nat King Cole and Patsy Cline he laughs), whose gravestone has never been engraved. She suggests he needs to forgive in order to move forward (after grilling him on his dating preferences), and that he should be the one to rectify his father's burial marker. The two people who set out that day have different perspectives at the end of it (and yes, they share a kiss when Michelle offers Barrack a lick of her ice cream cone). Tanne has made this daylong date unfold so naturally, we almost feel like we're eavesdropping but we don't feel guilty, so enchanting is time spent with this couple. Tanne reportedly told Sawyers to dial back his initial impersonation and his assured direction has conjured the young Obama. Sumpter doesn't resemble Michelle as strongly as Sawyer does Barrack, but her posture and (slightly over) exaggerated enunciation make that insignificant. Her Michelle is a tough nut yet that joyful dance in the park reveals a playful kernel. The film gains additional authenticity with its Chicago locations. "Southside With You" is a delight from start to finish. As they begin to fall in love, so do we. Grade:

Do not expect any action or intrigue in “Southside with You.” Do expect a charming story of the first date between the man who would be President and the woman who would be the nation’s First Lady. First and foremost, Tika Sumpter as Michelle and Parker Sawyers as Barak are pitch perfect in their recreation of America’s first couple not on a date on that warm summer day in 1989 Chicago. As their day progresses – Barak tells Michelle that the event he invited her to attend is hours away and suggests going to dinner and an African art exhibit – he does his best to endear himself to his co-worker. She insists, repeatedly, that this is “not a date” but you know that insistence will dissolve by the film’s end. I am not giving anything away – we all know what happens. Tika Sumpter does a fine job as young Michelle and gives a nuanced performance, showing her character and integrity. Parker Sawyers gets the meatier role as he has to recreate a young Barak and develops all of the mannerisms and speech of the future President of the United States. There is a sweet chemistry between the characters (and the actors) that makes you want to watch a film where nothing but talk fills the time. But, all this talking is done with assured writing and direction by first time feature film maker Richard Tanne. “Southside with You” may well propel its stars and writer/director to great things. The actors prove their ability to make the jump to lead roles and Richard Tanne is off to a great start as a filmmaker of note.