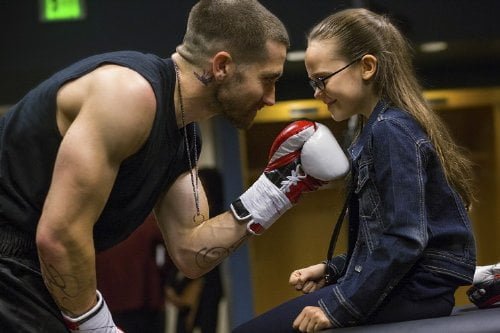 Billy Hope (Jake Gyllenhaal) is at the top of the boxing game with 43 wins, 0 losses. Everything is going great for him, his beautiful wife Maureen (Rachel McAdams) and daughter Leila (Oona Laurence), but he will face his biggest fight ever when tragedy strikes. Billy must face his greatest fear and claw his way back to the top in “Southpaw.”

Billy Hope's (Jake Gyllenhaal, "Nightcrawler") just gotten a TKO to retain his long held Light Heavyweight Boxing title when he's challenged by up and comer Miguel Escobar (Miguel Gómez, TV's 'The Strain') during his post-fight press conference. Billy pays little attention, but when he attends a swanky charity gala for the children's home that raised him and his wife Maureen (Rachel McAdams, "Aloha," HBO's 'True Detective'), Escobar's in his face again, promising 'First I'm gonna take your bitch, then I'm gonna take your belt.' Enraged, Billy ignores Maureen's pleas and charges the man, but when a shot is fired in the hotel lobby, Billy's world is shattered. As he hits bottom, he appeals to gym owner Tick Wills (Forest Whitaker, "Lee Daniels' The Butler") to help him get back on his feet in "Southpaw." You've seen this movie before, the one where someone has it all, loses it, learns humility then climbs back up. You've seen this movie done better before too, writer Kurt Sutter (TV's 'The Shield,' 'Sons of Anarchy') establishing Maureen as one savvy dame but not so savvy apparently that her family tanks financially as soon as she's left the scene, a seeming empire ground to dust in a matter of months. Originally conceived as an Eminem vehicle, what the movie does have is Jake Gyllenhaal, whose six month training regimen is physically evident and who gets right into the skin of a guy who essentially grew up on the streets. Also good is Rachel McAdams, who creates such a strong, loving character her essence hangs over the proceedings long after she's gone. James Horner's lovely work, atypical for the genre, is his last (the Oscar winning "Titanic" composer died in a plane crash last month). When we first meet Billy, he's got an aggressive style, director of photography Mauro Fiore ("Training Day") accentuating his rage-fueled fighting style with extreme closeups of his taunting face (Fiore brought HBO Boxing's cameramen on board to cover the matches). Inked across his back is 'Fear No Man.' But Billy's been on top of the heap for a while now and Maureen's all for pulling back, resisting manager Jordan Mains' (rapper 50 Cent, "Escape Plan") $30 million 13 fight HBO deal. Once she's gone, her murder naggingly unsolved, Billy goes into a spiral, drinking and withdrawing, crashing his pricey ride on his own massive estate. Mains jumps ship, working with the hungry Escobar, who smells a kill. The state steps in and takes away custody of Billy's 10 year-old daughter Leila (Oona Laurence). His home in foreclosure and a judge demanding significant changes to get Leila back, Billy moves into a shabby room and accepts a janitorial job with Tick, who's left the world of pro boxing to work with inner city kids. Billy begins to prove himself, working with the young Hoppy (Skylan Brooks, "The Inevitable Defeat of Mister & Pete"), so Tick agrees to help him train, old school. Tick completely revamps Billy, telling him he takes too many punches, steering him towards a smarter, more defensive style. The changes he makes in the ring begin to be reflected in his life, his emotionally shattered daughter beginning to accept his visits once more. When Billy fights for a local charity, he's approached by his old manager with the offer we knew was coming all along. Director Antoine Fuqua ("Training Day," "The Equalizer") has never been accused of subtlety, so the depth of performances he achieves here are noteworthy even if the story beats come down like a sledgehammer. In addition to Gyllenhaal and McAdams, young Laurence impresses as does Naomie Harris ("Skyfall") as her tough but fair social worker (if the screenplay gets one thing really right, it is in resisting setting her up as a romantic interest). Whitaker's effective, although his role's no stretch. Sylvester Stallone made the boxing term southpaw part of the Everyday lexicon in "Rocky" and this film's finale borrows liberally from that one, one fighter's humble entrance contrasted with Vegas flash, Leila waiting in the dressing room just like Adrienne. "Southpaw" is no "Rocky," but Gyllenhaal gives it soul. Grade:

Anton Fuqua helms this old fashion boxing movie about the fall of a champ when his life is shattered by a single, accidental gunshot. At that moment, Billy’s life, as he knew and loved, is over. This is where “Southpaw” finds its métier as the former champion must drag himself out of the gutter of his misery if he is to get his daughter back. This old fashioned story is told well enough without much distinction. Where “Southpaw” works best is in the ring. Jake Gyllenhaal hits another one out of the park as boxer Billy Hope, fully matching his quite different character, Louis Bloom, in last year’s creepy thriller, “Nightcrawler.” The actor gives pathos to his Billy and the many boxing matches are believable and convincing, bringing to mind the likes of “Raging Bull (1980),” ”Body and Soul (1947)” and “Harder They Fall (1956).”. You feel the punches as cinematographer Mauro Fiore brings you in close to the fight action between Billy and his opponents, culminating in the expected Big Fight to wrap things up. Fuqua show his skill in directing action scenes, though things get a bit stilted when it comes to the non-fight scenes.