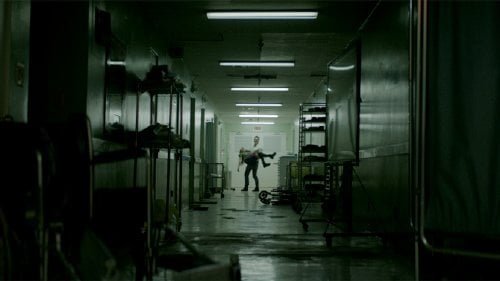 Five groups of very weary travelers head down a dark highway marked with a sign whose number has long faded. None are prepared for events that will occur that night as each group heads “Southbound.”

There is a remote stretch of highway whose travelers must face their sins. Most end up going "Southbound." Anthologies are one of the toughest movie formats to pull off. With their mix of filmmakers, the results are almost always uneven. Make one in the horror genre, and the deck's usually stacked even higher against success. Now there's "Southbound," one of the most rewarding horror anthologies to come down the pike, only one of its five stories treading water. As in "V/H/S," which all but one of the filmmakers here contributed to, the stories transition fluidly, "Southbound's" device a handshake from the end of each to the beginning of the next. In each story, a sinner must face his or her comeuppance. Some survive, others do not as a D.J. (Larry Fessenden) keeps score. The film begins with the Radio Silence collective's ("V/H/S") 'The Way Out,' in which the blood spattered Mitch and Jack ("V/H/S's" Chad Villella and Matt Bettinelli-Olpin) race down the road, stopping at a cafe to wash up. But no matter how hard they try, the road south keeps bringing them back to the same place and huge, spindly spectres resembling practical effect versions of Deatheaters gather. Mitch's exit leads to the motel where hungover bandmates Sadie, Kim and Ava (Fabianne Therese, "Starry Eyes," Nathalie Love, "Palo Alto" and Hannah Marks, "The Amazing Spider-Man") are preparing to leave. A blowout forces them to hitchhike and they are quickly picked up by an oddly cheerful couple in a Mercedes. Raymond (Dana Gould, "Tales of Halloween") and Betty (Susan Burke, "Smashed") suggest the girls spend the night but as the evening progresses, complete with the couple's creepy twin teenaged boys and indecipherable meat, only one of the three has the sense to suspect something evil in this tale that plays something like "Parents" by way of "Rosemary's Baby." She's the only of the 'Sirens' to get away, but she's immediately and quite literally run into by Lucas (Mather Zickel, "I Love You, Man") in David Bruckner's ("V/H/S") 'Accident,' "Southbound's" high point. We can see Lucas toys with leaving the broken woman lying on the deserted road, but when a horrible gurgle emerges from his throat, his conscience kicks in and he calls 911. Unable to provide a location, Lucas trundles the girl into his back seat and races to the nearest town, where he finds an emergency room. There's only one, big problem. The town appears deserted, as is the hospital. The voice at the other end of the phone patches in a doctor, who insists Lucas follow his directions for life saving surgery. As the camera pans away from Lucas, it picks up the laughing woman on the other end of the phone. She makes her way into a strange bar, populated with otherworldly locals. Enter Danny (David Yow, "Entertainment"), who questions everyone as to the whereabouts of his sister Jesse (Tipper Newton, "The ABCs of Death"). Bartender Al's (Matt Peters, Netflix's 'Orange Is the New Black') mocking tattoo is just one indication that maybe finding Jesse isn't such a good idea. 'Jailbreak' only really works as a segue into Radio Silence's capper, 'The Way In,' in which Jem (Hassie Harrison) is traveling with her parents to check out colleges. After stopping at their Airbnb home for the night, masked strangers begin to torment the family and it appears dad's got a dreadful secret. "Southbound" is an efficient, thematic shocker whose filmmakers make the most of their restrained budgets. It's a quick binge of horror shorts, all woven together into a tasty meal. Grade:

I am not a fan of anthology movies, especially the horror kind. They tend to have some tie, ostensibly, between each of stories told, but each tends to be a separate entity unto them. “Southbound,” though it has four credited directors – Roxanne Benjamin, David Bruckner, Patrick Hovarth and the members of Radio Silence (Matt Bettinelli-Olpin, Justin Martinez, Tyler Gillett and Chad Villella)– has an integrated feel as it flows, rather than jumps, from one horror tale to the next. Plus, all the stories keep the Southbound to Nowhere feel. The film begins with two desperadoes, Mitch (Had Villella) and Jack ((Matt Bettinelli-Olpin), covered in blood, stopping at a remote truck stop. The greeting is not exactly warm and, after cleaning up, they decide to keep going. Unfortunately, every time they try to drive away from the stop, they are inexplicably turned around and always arrive back where they started. And, there are some mysterious wraiths slowly converging on the two fugitives. From here, the filmmakers are given reign to their individual tales but always with the binding thread that makes “Southbound” the kind of horror film that even a non-fan of the genre, like me, can appreciate.