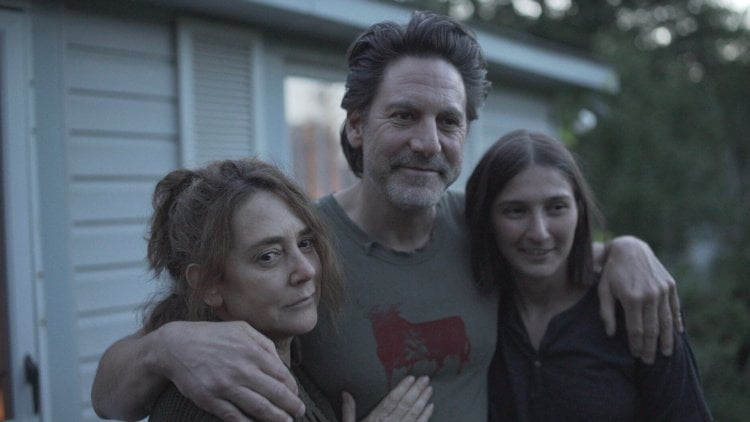 A modest house of unique character is nestled within the natural splendor of the Catskills, its matriarch’s garden providing bounty for its table.  It is the beginning of summer and Lila’s embrace (Talia Balsam, AMC's 'Mad Men') includes not only husband Edgar (Scott Cohen) and daughters Sam (Macaulee Cassaday) and Dara (Naian González Norvind), but a friend battling cancer and her two children as well.  News of a new family member will also be the ultimate betrayal and Lila’s stages of grief will upend everyone on “South Mountain.”

Writer/director Hilary Brougher ("Stephanie Daley") has created a real family affair both in front of and behind the camera, her husband Ethan Mass the cinematographer, their two children playing Gigi’s (Andrus Nichols) children Jake (Guthrie Mass) and Charlotte (Violet Rea), her one location her own mother’s house in the Catskills.  Perhaps that is why everything about this small, intimate film feels so natural, lived in and true, Balsam’s performance empathetic and generous.

Events kick off in mid June, the sprawl of family and friends loosely uniting over a meal prepared from Lila’s garden and Edgar’s grill outside their modest antique home.  Older daughter Sam has arrived with Emme (Midori Francis), whom we gather is both a business and life partner, as well as Jonah (Michael Oberholtzer).  When she sees how lovely Lila’s made an upstairs room for her, we learn that Sam’s biological mother was a friend of Lila’s who passed away.   But as the women reconfigure into different groups, a couple stealing away to an outdoor sauna, others converging on the back stairs, Edgar gets a phone call which he moves inside behind closed doors.  ‘Work’ Lila acknowledges, clearly an old, accepted annoyance.

That phone call though, is something else entirely in more ways than one.  Edgar has been called by Gemma (Isis Masoud) who is in the process of delivering his child two weeks early and Masoud allowed Brougher to use her actual childbirth.

Edgar eventually admits this news to Lila, who apparently had forgiven his transgression once before and believed the affair over.  As Brougher ticks off the summer noting dates at irregular intervals, we watch Lila act out in ways large and small, some so extreme they’re almost funny, others understandable yet hurtful to others, her two daughters whipsawed by the maelstrom.

Brougher utilizes her single location well, reconfiguring her cast in various spots.  A group of mothers and daughters converge on the back stairs for conversation and hair braiding.  A standalone outdoor sauna’s intimacy evokes different reactions among its visitors.  The home’s lovely, lived in interior expresses its female owner.  A late, intimate scene between Balsam and Cohen illustrates how love can stay alive and evolve, Cohen’s performance inviting forgiveness.

While it may be driven by a divorce, “South Mountain” celebrates sisterhood and maternity, both crystallized by Balsam.  It would make a lovely, if unconventional choice for a Mother’s Day movie.

Lila (Talia Balsam) is living a quiet and happy life with her family in the Catskills. That is, until her husband Edgar (Scott Cohen) drops the news – his girlfriend Gemma (Isis Massoud) has had his baby. Suddenly, that secure life is thrown into turmoil in “South Mountain.”

Writer-director Hilary Brougher tells a quiet tale of a woman in turmoil as the life she once knew is torn asunder by her husband’s stunning revelation. Suddenly, Lila’s safe and steady life is anything but. Talia Balsam gives a powerhouse performance as a wife and mom facing life-affecting changes. The actress gives Lila a strength that makes you know that she is a survivor and Balsam dominates the screen.

Brougher’s slice of life family story has the feel of real people in actual day to day situations. Lila is the moral center of her fast-dissolving family with a philandering husband and two daughters. The supporting cast is well-played by Lila’s extended family, especially best friend and neighbor, Gigi (Andrus Nichols), who is fighting her own battle with breast cancer.

“South Mountain” is the kind of drama where nothing “happens” but, in fact, there is a great dealing happening for Lila and those around her, just like in a real family.