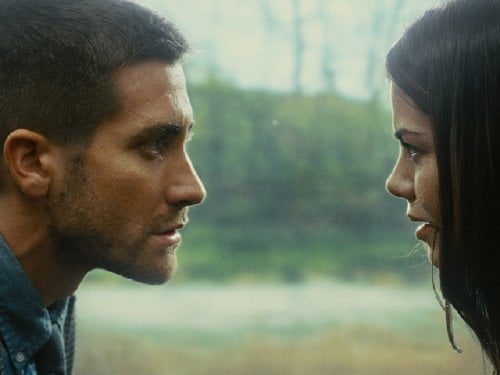 Captain Colter Stevens (Jake Gyllenhaal) awakens on a speeding train. Across from sits Christine (Michelle Monaghan) a pretty young woman he does not recognize but she seems to know him. Disoriented, he heads for the lavatory and, when he looks in the mirror, it is not the face of Captain Stevens that he sees. As he heads back to his seat there is a tremendous explosion. A moment later, Stevens is alive but is trapped in a small chamber with only a video monitor his access to the outside world in “Source Code.”

Blackhawk helicopter pilot Captain Colter Stevens (Jake Gyllenhaal, "Love and Other Drugs") is on a mission in Afghanistan, but awakens to find himself on a commuter train heading towards Chicago. His seatmate, Christina (Michelle Monaghan, "Gone Baby Gone," "Eagle Eye"), acts like she knows him and when he heads into the bathroom, the face of another man stares back from the mirror, matching the IDs in his wallet for Sean Fentress, a teacher. Then the train explodes and Colter discovers himself in an isolation booth talking to Goodwin (Vera Farmiga, "The Departed," "Up in the Air"), who informs him he will be sent back to the train in 8 minute segments to discover who the bomber in a secret operation known as "Source Code." Ben Ripley's spec script led star Gyllenhaal to suggest Duncan Jones ("Moon") as director and it is easy to see why - there are so many parallels between "Source Code" and "Moon" that it feels like the earlier film gussied up with a new time travel gimmick. Jones clearly has a Jones for repurposing the dead without their knowledge in isolated situations where outside contact is limited to monitors and outside home base is a dangerous place. This sci-fi thriller boasts some really good performances and is slickly entertaining, but like "Moon," it's not wholly satisfying, it's feel good ending dependent on breaking one of the rules it had previously set up for itself. Each time Stevens reenters the train, the same series of events get jostled by his differing actions (the film extracts most of its humor from this, as Stevens anticipates the spilling of coffee on his shoe, etc.). He locates the bomb pretty quickly, but identifying the right suspect proves a bit more difficult - and Jones misdirects his audience as well. But as much as he is motivated by patriotic duty, Stevens begins to spend more time on trying to figure out what Source Code actually is and how he ended up a part of it. And he can act as crazy as he pleases, even shoot someone, because it will all end in minutes and he'll get a fresh start - to a limit. He also falls for Christina and is determined to halt the train disaster altogether, even though he's been told it has already happened and he is really on a mission to prevent a much bigger incident in downtown Chicago. While the train sequences are exciting because of their imposed time limit, they begin to get a bit wearisome, especially when Stevens becomes more focused on himself versus the task at hand. The real meat of the story is in the sparer scenes where Stevens awakens in a metal pod (Major Tom?) and tries to get information out of Goodwin. If Gyllenhaal and Monaghan are sweet together, he and Farmiga go far deeper and its largely due to Farmiga's amazing performance, mostly viewed through Stevens's monitor staring straight ahead. She makes her character relatable even as she tries to progress her critical, time sensitive mission. One can see the concern and sympathy and she begins to connect with Stevens, doling out little bits of information to calm him. Farmiga can express mountains with a small movement of her lip and her last scene with (a prosthetic) Gyllenhaal is the most moving in the film. Gyllenhaal has the physical attributes and intensity for the character (his counterpart is amusingly nerdish and plump) and Monaghan is so sunny here anyone would flower in her presence. As Farmiga's boss and the Source Code inventor Dr. Rutledge, Jeffrey Wright ("Basquiat," "Casino Royale") maintains a delicate balance between hero and villain. Canadian comic Russell Peters is a good, mouthy presence as one of the train's passengers. For the most part, "Source Code" is well shot and edited, Jones's pace barreling along like that train on its tracks. Explosive CGI work is a little rough around the edges, though, that train never feeling like it's really being ripped apart. Ripley employs a nice bit of writing to bring Stevens back to reality that pays homage to "The Manchurian Candidate" and Jones uses a nice funhouse mirror visual touchstone throughout Stevens's transitions that is worked neatly into the finale. But like most films involving time travel, not all their elements quite add up.

Duncan Jones (son of David Bowie, aka David Jones) made his debut with the lackluster “Moon.” His sophomore effort represents a maturing in the helmer as he makes another foray into science fiction storytelling with a script by newcomer Ben Ripley. The premise for “Source Code” is new technology that allows the US military to use “time reassignment” that sends the subject to a place in time – but only for eight minutes. Captain Stevens is the subject and he finds himself on the aforementioned train. Back in his chamber, Stevens sees monitor is filled with the image of Captain Colleen Goodwin who explains to Stevens that he is a major part of operation Beleaguered Castle, a top secret op that is trying to use the eight minute time jump to thwart past terrorist attacks. Captain Stevens learns that his mission is to find and defuse the bomb on the train. He also has the much bigger mission to stop a bombing of far greater magnitude than the deadly train explosion and he must keep going back to his eight minutes of hell. Captain Stevens, with his repeated visits to the train, begins to fall for pretty Christina and his mission takes yet another path – to save Christina. As each eight minute segment unfolds, the tension builds, as does the plot. Newbie feature scribe Ripley weaves an elaborate story tapestry as Stevens jumps back and forth in time, from one prison, the train, to the other, his isolation chamber. The two plotlines are intelligent, with the train plot constantly ramping up the tension and the “present” plot taking on a sinister and dramatic turn. The three stars (supported by Geoffrey Wright as the secret operation’s director Dr. Rutledge in a phoned in performance) are solid in their roles. Gyllenhaal gets to put a good character arc on his Captain Stevens with the dual role, handling the action ably as well as the drama, Michelle Monaghan is sweet, almost bubbly, as Christina who, we learn at the start, has made a big life decision and tells Stevens about it. This adds further to the tension as he falls in love with her and saving her life becomes yet another mission for the time traveler. Vera Farmiga, as usual, is fully capable in the role of Captain Goodwin, who knows much more about Beleaguered Castle than she is telling Stevens. “Source” code is a well-crafted film on all levels. Lenser Don Burgess uses two very different camera styles – fast-moving and fluid camera work on the train and the statically lensed gloom of the isolation chamber. The plot twists are tight and never gratuitous and production design, by Barry Chusid, is first rate, The term “intelligent sc-fi” is becoming an oxymoron in the Hollywood film biz, which treats science fiction as a merchandising effort – look at the big money makers like the “Transformers” franchise - so it is nice to see a film that does not dumb itself down to appeal to the masses.