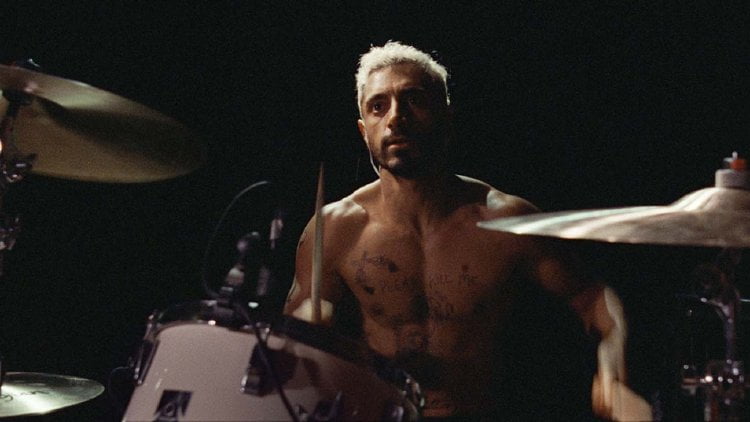 After years of banging the drums for his punk band, Blackgammon, Ruben (Riz Ahmed) suddenly develops acute hearing loss.  Terrified of losing his bandmate and lover Lou (Olivia Cooke) just as they seem to be breaking out, he remains in denial, even after being told repeated exposure will hasten his condition.  Then one day, the burden becomes too great and he tells Lou ‘I can’t hear anything.’  Lou urges immediate action, taking the former heroin addict to a sober house for learning to cope with deafness.  Held back by his unfamiliarity with ASL, Ruben is enrolled in a children’s class where he makes a connection with a child at the top of a playground slide via the “Sound of Metal.”

The cowriter of Derek Cianfrance's "The Place Beyond the Pines," Darius Marder, makes his feature directorial (with Cianfrance as a cowriter) 10 years after his work on Cianfrance’s documentary “Metalhead” exposed him to the idea of a metal musician suddenly losing his hearing.  Using the seven stages of grief as an outline, Marder’s film could be seen as a coming-of-age tale, his protagonist’s all in relationship with Lou a codependency cover for larger issues.

Welcomed into the film via a gig featuring blaring distortion, we are segued into an a.m. scene of domestic, albeit equally peace shattering, bliss.  Inside the Airstream RV that is touring vehicle, recording studio and home, Ruben fires up grinders and blenders as he lovingly prepares a beautiful breakfast for his beloved.  The next time we see him do this, sound designer Nicolas Becker radically alters our aural perception, delivering muted, distant sounds the way Ruben would now hear them.  It is disorienting.

This is one of “Sound of Metal’s” most distinctive hooks, which is more profoundly and disturbingly examined during the hearing test we witness.  Ever so faintly, and with a tinny quality, we hear the man on the other side of the glass ask if Ruben can hear him.  Ruben’s response is more forceful than his experience deserves.  The scene continues, and it feels like Ruben is in outer space, ever more slowly drifting away.  Then Marder brings us into the opposing point of view – that of the tester – and the change is dramatic.  The words Ruben believes he is repeating back bear little resemblance to those that are being spoken to him.  He also appears to refuse to hear his options, having latched onto the idea of a cochlear implant as soon as it is mentioned, never mind the $40-80K cost or any consideration of its pros and cons.

This makes his assimilation into the sober deaf house a bumpy one.  His guide, alcoholic Vietnam Vet Joe (Paul Raci), tries to instill in him the concept that deafness is not an impairment, that it is a condition one can learn to live quite normally with.  Awkward with the adults he rooms with, Ruben begins to blossom more with the children taught by the luminous Diane ('The Walking Dead's' Lauren Ridloff), perhaps more emotionally on their wavelength.  It is at his most childlike that Ruben eventually arrives at the door of Richard Berger (Mathieu Amalric), Lou’s wealthy father who is clearly not expecting him, nor anticipating that Lou does.  The partner he has not seen for months, who continued on with her own gigs in Paris, returns with an entirely new look, more traditionally feminine than the punk singer of bleached eyebrows (a makeup trick that makes Cooke initially unrecognizable), piercings and tattoos.

Ahmed doesn’t engage in histrionics, instead giving a quiet, internal performance that nonetheless projects his character’s internal thoughts and emotions.  The man we are left with (in a knockout of a final scene) is very changed from the one we first met.  Also strong is Raci, a hearing actor of deaf parents offering calm guidance and tough love.  Amalric, and to a lesser degree Cooke, both offer benevolent distance to support a character who needs to lose his emotional training wheels.

The film was shot largely in and around the Boston area (farewell, late, lamented Hollywood Hits theater of Danvers).  The entire film is close captioned, not merely subtitled, at the request of Marder’s paternal grandmother, who is deaf.  The device gives us yet another on-ramp into the world of the non-hearing.

Ruben (Riz Ahmed) is the drummer for the duo punk band Blackgammon with his singer-girlfriend Lou (Olivia Cooke). They have the life touring gigs in their custom Airstream RV, until something terrible happens – Ruben is going deaf. He has two choices: cope with the affliction or depend on an expensive operation in “Sound of Metal.”

A movie about a punk rocker losing his hearing should not appeal to an old white guy steeped in the music from the 1960s. And, the music used early on in “Sound of Metal” does not appeal to me at all. But the deaf stuff, that is another thing. I have been suffering from hearing loss for decades so, when Ruben first realizes that he is going deaf, I immediately felt a kindred spirit.

When the rocker cannot hide his hearing loss for Lou any longer, he breaks the bad news and she supports him. A recovering addict, he asks for help from his sponsor and is directed to Joe (Paul Raci), the head of a deaf community who invites Ruben to stay. It is hard, emotionally-taxing work being deaf but there is another, easier solution than admitting defeat with deafness – a Cochlear Implant. The device, though, is dearly expensive.

What results is a character study of Ruben, a young man who, when he learns of his life-altering condition, feels sorry for himself and, even, throws a tantrum. That changes when he meets Joe and the different paths he can take open up. Ruben’s story is about his journey of redemption as he learns how to cope with being deaf.

A good portion of “Sound of Metal” is given montage treatment as Ruben, reluctantly and in denial, learns the deaf alphabet, spends time with the other residents, teaches kids how to play the drums (including a drum line sequence with the kids) and appears to cope. But, he never accepted his plight and, without consulting with Lou, sells their RV. The result gets complicated, better left to the viewer to figure out.

When the film starts, we see not subtitles but closed captioning for the deaf and it is a bit strange at first. (I have never really used CC.) Then, being that kindred spirit to Ruben, I understood the subtle intent of putting us in the world without sound. Riz Ahmed does a superb job in showing the suffering and confusion of the affliction and gives Ruben an effective and positive arc.

Deafness is not something that is popular fodder as source material for a movie. Director Darius Marder and his cast and crew – besides Ahmed’s solid performance, Paul Raci, as his mentor, advisor and friend, is equally capable – help bring understanding about deafness to those who can hear. That is a tough task and they do it well.