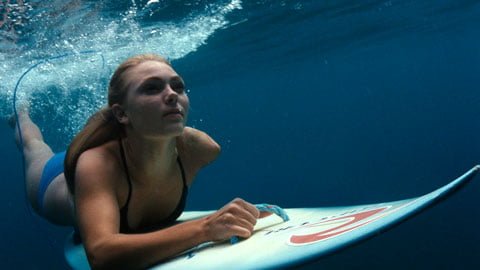 Soul Surfer /sohl serf-er/ – noun; 1. A term coined in the 1970s, used to describe a talented surfer who surfs for the sheer pleasure of it. Although they may still enter competitions, a Soul Surfer’s motives go beyond winning.

Bethany Hamilton (AnnaSophia Robb, "Charlie and the Chocolate Factory") grew up in a Kauai surfing family and was a top rated competitor by her early teens. Out with family friend Holt Blanchard (Kevin Sorbo, TV's 'Hercules: The Legendary Journeys') and his kids to prep for an upcoming regional event, her world was turned upside down where her arm was taken by a shark. But after joining a church mission to aid Pacific tsunami victims, Bethany's spirit brought her back to the sport as a true "Soul Surfer." This is an inspirational sports drama stuffed full of Christian values and CGI that draws the eye in ways both good and bad. The film breaks out its religious underpinnings right off the bat as Bethany's called from the surf to join an outdoor church service. The Hamilton family (father Tom (Dennis Quaid), mom Cheri (Helen Hunt) and two older brothers) is fun loving and supportive and squeaky clean. Bethany's almost scandalized when her best friend Alana (Lorraine Nicholson, daughter of Jack) buys a bikini. But boy, can that girl surf. Adapted from Hamilton's book by the 'Baywatch' team of Douglas and Deborah Schwartz & Michael Berk along with director Sean McNamara (Disney TV's 'That’s So Raven'), "Soul Surfer" hits all the inspirational sports movie elements. There's the abrupt obstacle which threatens to take our heroine down, followed by an event which gives her the strength to get back on her surf board. The best friend is also a competitor and each cheers the other on. But there is also the villainous rival, Malia Birch (Miss Hawaii Teen USA 2004 Sonya Balmores Chung), who's eventually worn down by Bethany's sheer goodness and sportsmanship. Strong moral values are a constant but the screenwriters also dubiously suggest that Bethany's accident would not have happened had she not reneged on a promise to youth-group leader Sarah Hill (American Idol Carrie Underwood) to take part in a Mexican mission. The filmmakers stage the shark attack almost like a pop up - it's suddenly there and just as suddenly gone (the real Bethany never even saw the 14 foot tiger shark). Instead they wisely put their focus on the pulse racing rescue, where Holt's quick thinking got the girl from the water to a local hospital, 60% of her blood lost, but not her life. (If dad Tom was really on the verge of surgery, halted to take his daughter's emergency in, truth really is stranger than fiction.) Surfing scenes are really well done, giving a sense of not just the euphoria of catching a great wave but the pounding one takes getting pushed under. Hamilton, who is 6 inches taller than Robb, did many of the film's stunts and face replacement CGI is sometimes clearly evident. A coda outlining the events we've just seen with the real live girl just underlines the Hollywoodization she's undergone - Hamilton is your average American teen, not the glowing doe-eyed beauty portrayed by AnnaSophia Robb.