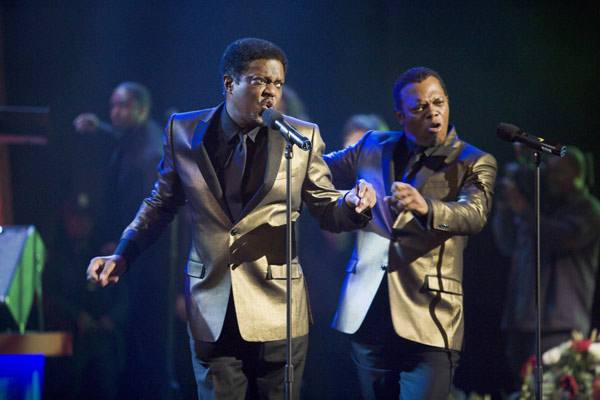 Floyd Henderson (the late Bernie Mac, TV's "The Bernie Mac Show") is unhappily retired, put out to pasture by the nephew who took over his car wash business. But when the legendary Marcus Hooks (musician John Legend) dies at the age of sixty-three, Floyd sees the opportunity to reunite with his Real Deal partner Louis Hinds (Samuel L. Jackson, "Snakes on a Plane," "Lakeview Terrace"), the man who sang back up for Hooks with him decades ago before Hooks went solo, back when they were still "Soul Men."

Anyone who had affection for the late Bernie Mac would have a hard time not enjoying his last performance, no matter how cliched and trite this buddy road movie is. Add the presence of Isaac Hayes, who died the day after Mac, and it makes the project all the more poignant. "Soul Men" is by no means a great or even very good movie, but as last projects go, it's certainly not an embarrassment, and Mac and Jackson clearly enjoyed working together. When Hooks's manager Danny Epstein (Sean Hayes, TV's "Will & Grace") decides to reunite the Real Deal for a tribute show at the Appollo, Floyd's roaring to get back in the game, but Hinds, Whose fortune has run the opposite of Henderson's in the intervening thirty years they haven't spoken, wants nothing to do with it. Until, that is, he blackmails Floyd into a 60-40 split of the $40 grand appearance fee. Lou also won't fly, so the two set off in Floyd's lime green El Dorado with five days to cross the country. Floyd's booked them into gigs to work the kinks out of their act and while their first appearance at the Flagship Motor Inn is a disaster, their next night at an Amarillo C&W bar rocks. Night three brings them to the home of Odetta, the woman who was the root of their rift when she left Louis for Floyd. Her daughter Cleo (Sharon Leal, "Dreamgirls') informs them of her death, but welcomes them to stay. After sneaking a peak at the birth date on her license, Floyd begins to do some math. Director Malcolm D. Lee ("Undercover Brother," "Welcome Home, Roscoe Jenkins") and writers Robert Ramsey & Matthew Stone ("Life," "Intolerable Cruelty") never met a joke they wouldn't use more than once, and so we have Floyd mistakenly shooting off Louis's gun, first in a moving vehicle, later at the car's tire. Viagra and aging jokes reign with Floyd (ironically) convinced Louis is dying. Secondary characters don't fare well, mostly due to underdeveloped writing. There's Cleo's abusive mate Lester (Affion Crockett, "Welcome Home, Roscoe Jenkins"), a man with absolutely no redeeming qualities that would explain them being together. Adam Herschman ("Harold & Kumar Escape from Guantanamo Bay") is the intern with a Jewfro and no funny lines and Jennifer Coolidge ("Legally Blonde," "For Your Consideration") abases herself as an overweight, toothless romp in the post-show hay for Mac, an extended gross out joke. Sean Hayes brings nothing to the party either. But Mac and Jackson are entertaining together, both on and off the stage, and Leal adds some sweet backup of her own when she joins their act. Perhaps better than the film itself is the closing credit tribute to Mac and Hayes, with Mac entertaining extras with standup routines and talking about always leaving his audience with a lasting impression. He will be missed.