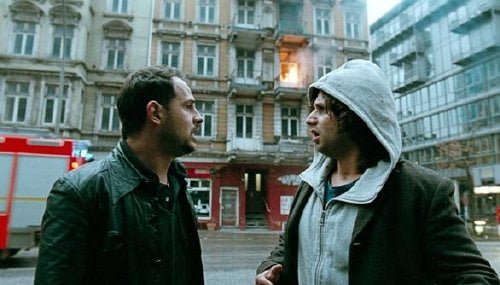 Zinos (Adam Bousdoukas) owns a hole-in-wall eatery in the city’s warehouse district and, while the food is not so good, it is cheap and he has a loyal group of locals as his clientele. Things go very wrong when, first, he hurts his back, then, his convict brother shows up on his doorstep begging for a job and Zinos hires him to manage “Soul Kitchen.”

Fatih Akin ("Head-On," "The Edge of Heaven") cleans his palate from his heavy immigrant dramas with this light, rambling and rather cliched comedy. Adam Bousdoukos, who cowrote the screenplay, stars as Zinos Kazantsakis, a Greek immigrant running a restaurant in a converted Hamburg warehouse. He makes lousy food, but has regular customers and a hot Teutonic girlfriend Nadine (Pheline Roggan). But when she decides to further her journalism career by moving to China Zinos' world begins to crumble. He hires temperamental fine dining chef Shayn Weiss (Birol Ünel, "Head-On") who drives away his regulars. His brother Illias (Moritz Bleibtreu, "Run Lola Run," "The Baader Meinhof Complex") gets him to sign employment papers to get him on work release from prison and an old schoolmate, Thomas Neumann (Wotan Wilke Möhring, "Valkyrie"), pretends to pal up when he really wants to get his hands on Vinos' real estate. Then his back goes out and the uninsured cook discovers he has a herniated disk. Things all manage to come back together of course, but there are few surprises. There are also few real laughs despite Bousdoukos's engaging performance. And in a film called "Soul Kitchen" with a star sporting a Jim Morrison 'do' one expects some music and Akin delivers an eclectic soundtrack featuring everything from the film's own Bad Boy Boogiez Band to old German and Greek folk songs. One would also expect a lot of food and it is telling that Vinos's preparation of frozen fare is more compelling to watch than Shayn's gourmet cooking.