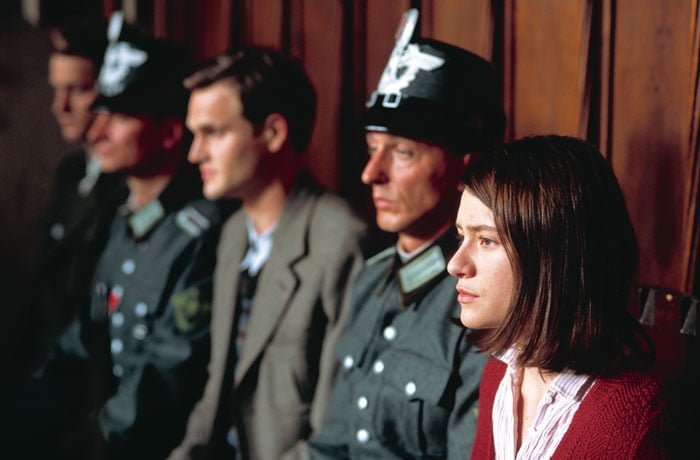 As Nazi Germany wages war and genocide upon Europe, a small but vocal resistance movement, the White Rose, tries to end the horror through peaceful protest. One of the female members of this resistance is Sophie Scholl (Julia Jentsch) who takes on the dangerous mission to distribute leaflets to the population of Munich with her brother Hans (Fabian Hinricks). Their idealistic hope is to convince the people to rise against the Nazi military machine and end the war in Sophie Scholl – The Final Days.”

Director Marc Rothemund and screenwriter Fred Breinersdorfer utilize their access to original interrogation records just uncovered in 1990 as well as relatives of those involved to recreate a very specific time in Munich. Only six days - February 16th through the 22nd - charts the arrest of the famous White Rose resistance siblings to their execution in "Sophie Scholl: The Final Days." The Germans have been on a roll of late, airing out their Nazi past in films like "Blind Spot: Hitler's secretary," whose subject compares her naivety to the bravery of Scholl, to last year's foreign language nominee "Downfall." While this story has been visited before, in Michael Verhoeven's 1982 "The White Rose" and Percy Adlon's 1982 film "Five Last Days," this is the first time the story has been told from Scholl's perspective and the first time it has been carried through to the very end. If you think the subject matter, which largely consists of an interrogation, sounds dry - guess again. Julia Jentsch ("The Edukators," "Downfall") gives an amazing performance, one which has won her Berlin's Silver Bear, the European Film Award and the German Film Award, and she's neatly matched with Gerald Alexander Held ("Downfall") as the professional interrogator Robert Mohr who is by turns outwitted, outraged and moved by the young girl he's charged with indicting. At first "Sophie Scholl" might seem bewildering to the uninitiated. We're given next to no information on The White Rose, only given witness to a bunch of college students and a mimeograph machine. We have no background as to why they are so impassioned, just thrown into the story right before Sophie and her brother Hans (Fabian Hinrichs, "Schussangst (Gun-shy)" place stacks of anti-Hitler leaflets out in the open of their university. Sophie cannot resist shoving a stack over a balcony and the duo don't make it down the staircase before they are arrested. Sophie is incredibly cool under pressure, insisting calmly that she had nothing to do with the content, only the inability to resist the prank of pushing the papers. After hours of grueling questioning, she's made it all the way to exit when her release form is whisked away - it has been discovered her father served time for an anti-Hitler statement. When Mohr presents her with her brother's confession, she backs down, admits the crime and says she's proud of it. Her remaining days will be spent trying to convince Mohr that she and her brother were the only perpetrators and why it is so logical that Hitler must be defeated. Over the course of the film, we're given all we need to know about why the Scholls did what they did. "Sophie Scholl" features a lot of feint and parry both before and after Sophie's admission. This is a film about doing the right thing and standing up for one's beliefs and it is one of the rare, if only, cases where a Nazi resistance fighter appears to have won the admiration of her accusers. The man who carried out 3,000 executions noted that no one ever walked taller to their death. We can see in Mohr's eyes that he is affected by the words of a twenty-one year old ('the weaker sex' as he's called her earlier). He is also fairly astonished when he provides the girl a way out and she refuses to take it. Even a prison matron bends the rules, allowing Sophie, her brother and the friend who shared their fate, Christoph Probst (Florian Stetter, "Before the Fall"), final time and a final smoke together. But there is one who is not moved. In the film's third act, the trial which precedes the astonishingly immediate execution, the 'blood judge' Roland Freisler (André Hennicke, "Downfall") spits and rages his fury, cowing any inclination the accuseds' lawyers may have had to defend them (they had little as it turns out). The three on trial have three very different responses. Probst, a father of three, begs for his life claiming mental despondency for his acts (his only crime? authorship of some words found on Hans' person that were never distributed). Hans, a German soldier, makes a political case very clearly. Sophie retains her philosophical approach, even telling the fearsome judge 'You will be standing tomorrow where I am standing today.' Their rational response makes for strong contrast to the judge's wild gesturings and the witnesses, many of whom, like the judge himself, were flown in from Berlin, are very still. Rothemund has made his film very economically, using real locations wherever possible, almost all interiors. Sophie's many hours with Mohr are comprised of mostly one shots back and forth across his desk, very procedural, very Teutonic. The film is only opened up with Sophie's appreciation of the blue sky, a theme that recurs throughout the film, but not, however, at its end. The director's choice of a black screen accompanied only by the sound of the blade and the victims' last utterances is stark and effective. "Sophie Scholl: The Final Days" might seem like one of those historical films that will be good for you. It is. But Jentsch draws you into it until you find yourself so involved, you may be astonished.