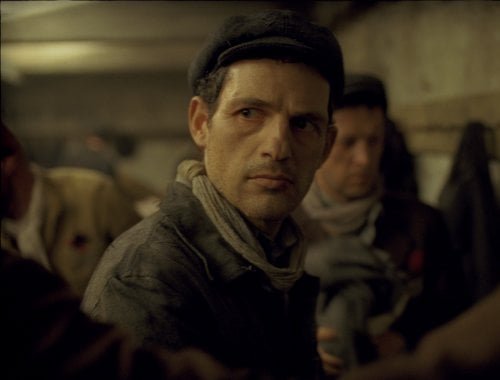 1944, Auschwitz. Saul Auslander (Geza Rohrig) toils under brutal conditions as a member of the Sonderkommando, the slave workers forced to clean out the crematoriums after the gassing of Jewish victims by the Nazi monsters. Among the corpses, he finds a boy, barely alive, and believes him to be his son. This begins a journey into horror as the man fights to give a proper burial to the “Son of Saul.”

In the waning days of the operations of the Auschwitz concentration camp, a Sonderkommando (a Jewish prisoner forced to assist the Nazi genocide) stoically goes through his ghastly routine. His group is planning a rebellion, but when he spies a young boy still breathing after a gassing, quickly dispatched by a Nazi doctor, he becomes obsessed with preserving the boy's body for a proper Jewish burial, claiming him as the "Son of Saul." This extraordinary feature film debut from cowriter (with Clara Royer)/director László Nemes plunges us into a vision of hell. Using shallow focus and a 1.33:1 aspect ratio, cinematographer Mátyás Erdély ("Miss Bala," "James White") keeps us tightly within Saul's (Géza Röhrig) point of view, the barely seen surrounding imagery accompanied by the sounds of a death camp making a stronger impression than if they'd been shot full on, our minds filling in the horrific blanks. Some have deeply criticized the film, but this stunning work about one man's last grasp at humanity when it appears to have been wiped off the face of the earth is a shattering, profoundly moving experience. The first thing we see is an out of focus long shot of men sitting in a field. We hear a train approaching and eventually Saul walks into focus, guiding new arrivals along a path into a chamber where we hear promises of work and a good salary, a shower followed by hot soup. Clothing is put onto pegs as everyone is herded into the next room. The door shuts and Saul immediately begins removing clothing from its hooks, the noise next door reaching a horrible crescendo before slowly dying away. He remains desperately stone faced as bodies are dragged along hallways, walls scrubbed of bodily fluids. But there is that young boy who momentarily beat the odds. Saul finds an excuse to visit the autopsy room, begging one like himself the boy's body not be cut. While his fellow Sonderkommando discuss plans to get pictures out and weapons in, Saul barely participates, instead taking great risk to find a rabbi and hide the boy's body (it is unlikely that this is really the man's son as several refute the existence of one). We see him inadvertently speed up one man's death as he recruits a holy man among a crowd led to a mass grave. Another, clearly no rabbi to all but Saul, attempts to get away from him at the river where men shovel ashes into the water. It is 1944 and the Nazis are in overdrive, the clock ticking down on their final solution, the chaotic situation an explanation for Saul's ability to move about as his own timeline's end approaches. But the rebellion comes to pass and Saul is one of many, the boy's body draped about his shoulders, who slips into the woods. Birdsong, less ironic than before, another river, another boy... Grade:

The Plymouth Brethren eschew such things as movies, television and anything that goes against their conservative religious beliefs. Will dutifully follows the tenets of the sect, waiting in the hall at school while the rest of the kids in his class get to watch an educational documentary on TV. While cooling his heals, waiting for it to be over, another teacher throws Lee into the corridor for disrupting his class. At first, Will is intimidated by the notorious bully but, when Lee offers to help him keep from getting in trouble (because of Lee’s own indiscretions), he agrees to be in the movie that Lee hopes will win the Young Filmmaker’s Competition called Screentest. Together, the pair begin to videotape Lee’s opus with Will gamely performing every stunt his pal devises. Things change, though, when a contingent of French exchange students arrive at the school led by a snooty New Waver with delusions of grandeur, Didier Revol (Jules Sitruk). The student body at the school embrace the arrogant Didier, with the boys forming an entourage and the girls lining up to be judged by Revol for their kissing skills. Soon, he takes Will under his wing with designs of taking over Lee’s project and being its star. The friendship that formed so painstakingly between Will and Lee is sorely tested. Sophomore helmer (and screenwriter) Garth Jennings (“The Hitchhiker’s Guide to the Galaxy”) takes things up a notch with this charming coming of age story about friendship, loyalty and fulfilling ones’ dreams. Jennings and company do a fine job capturing the mood and humor of the time with its costumes (especially Didier’s), film references and music (Depeche Mode’s Just Can’t Get Enough” used brilliantly along with The Cure and Siouxsie and the Banshees). The production is surprisingly lush for what has to be a pretty low budget film, especially by American film cost standards. Set design does a fine job in capturing the time and place with the vintage video equipment residing in Lee’s well-off family home. Cinematographer Jess Hall, who also did a terrific job lensing the very funny “Hot Fuzz,” does top work here, too. Other techs fit the bill. Son of Rambow” is much more than a kids’ film and should appeal to those who grew up during the 1980’s. The good nature of the film will strike a chord with other auds, both older and younger, too. The charming young stars, wonderful attention to detail and Lee’s imaginative creativity in making his movie are on the money.