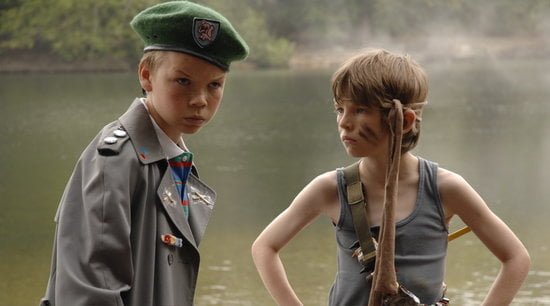 During one summer in the early 80’s, young Will Proudfoot (Bill Milner), whose mom is a member of The Brethren, a strict ultra-religious group, has his eyes opened when he sees a bootlegged copy of “Rambo: First Blood.” His new friend, Lee Carter (Will Poulter), is a bad boy filmmaker at their school and enlists Will as his numero uno stuntman for his own production of Son of Rambow.”

The Plymouth Brethren eschew such things as movies, television and anything that goes against their conservative religious beliefs. Will dutifully follows the tenets of the sect, waiting in the hall at school while the rest of the kids in his class get to watch an educational documentary on TV. While cooling his heals, waiting for it to be over, another teacher throws Lee into the corridor for disrupting his class. At first, Will is intimidated by the notorious bully but, when Lee offers to help him keep from getting in trouble (because of Lee’s own indiscretions), he agrees to be in the movie that Lee hopes will win the Young Filmmaker’s Competition called Screentest. Together, the pair begin to videotape Lee’s opus with Will gamely performing every stunt his pal devises. Things change, though, when a contingent of French exchange students arrive at the school led by a snooty New Waver with delusions of grandeur, Didier Revol (Jules Sitruk). The student body at the school embrace the arrogant Didier, with the boys forming an entourage and the girls lining up to be judged by Revol for their kissing skills. Soon, he takes Will under his wing with designs of taking over Lee’s project and being its star. The friendship that formed so painstakingly between Will and Lee is sorely tested. Sophomore helmer (and screenwriter) Garth Jennings (“The Hitchhiker’s Guide to the Galaxy”) takes things up a notch with this charming coming of age story about friendship, loyalty and fulfilling ones’ dreams. Jennings and company do a fine job capturing the mood and humor of the time with its costumes (especially Didier’s), film references and music (Depeche Mode’s Just Can’t Get Enough” used brilliantly along with The Cure and Siouxsie and the Banshees). The production is surprisingly lush for what has to be a pretty low budget film, especially by American film cost standards. Set design does a fine job in capturing the time and place with the vintage video equipment residing in Lee’s well-off family home. Cinematographer Jess Hall, who also did a terrific job lensing the very funny “Hot Fuzz,” does top work here, too. Other techs fit the bill. Son of Rambow” is much more than a kids’ film and should appeal to those who grew up during the 1980’s. The good nature of the film will strike a chord with other auds, both older and younger, too. The charming young stars, wonderful attention to detail and Lee’s imaginative creativity in making his movie are on the money.