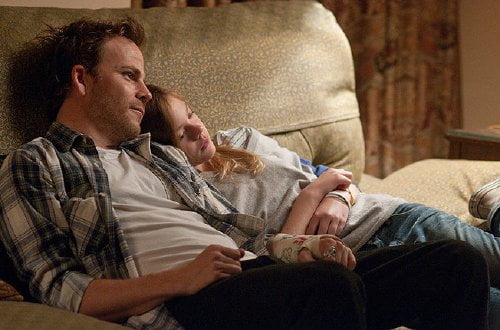 Johnny Marco (Stephen Dorff, "Backbeat," "Blade," "Cecil B. DeMented") is a popular actor living at the Chateau Marmont hotel. He floats through his days and nights, never wanting for women or diversion, but when his ex-wife Layla (Lala Sloatman, "Pump Up the Volume") announces she needs to go away for a while, Johnny's in charge of his 11 year-old daughter Cleo (Elle Fanning, "The Curious Case of Benjamin Button"). With Cleo, Johnny begins to reengage with real life instead of just existing in a nebulous "Somewhere."

Some may rankle at writer/director Sofia Coppola's ("Marie Antoinette") immersion in the lifestyles of the privileged and famous, but this companion piece to "Lost in Translation" is her most mature work to date. The film, which is slow and deliberate, has a lot going on underneath the surface and Harris Savide's restful camera work proves a mesmerizing portal into an awakening state of mind. We meet Johnny racing his black Ferrari on a remote track, going in circles on a road to nowhere, an apt metaphor for his life. He can barely stay awake for the twin blond pole dancers doing their candy striper routine in his hotel room. Women routinely come onto him and he flits from one to the next. Hangers-on begin parties in his suite while he's away and Benicio del Toro shares an anecdote about his room in the elevator. Every now and then, he gets a call from Marge telling him where to report next for work - a promotional obligation (along with a pissed off female costar), an appointment with special effect makeup artists (Johnny's head is entombed in plaster of Paris, a great visual gag). Then a different kind of blond, Cleo, makes her first appearance and jolts dad with talents he didn't know she had. She may be going in circles too, figure skating in an ice rink, but she's clearly headed somewhere. Later, when Cleo actually moves in, dad begins to get his head out of the clouds. 'Shouldn't you be in school?' he asks one morning. 'It's Sunday,' he's advised. Soon he's competing in Guitar Hero and ignoring the brunette who takes of her bikini top but leaves on a smile on the balcony below. A trip to Italy for a surreal awards TV show brings an inconvenient ex-lover (and Marco's sheepish smile at the breakfast table), his first look at Cleo in formal attire, a swim and a midnight room service gelato splurge. Back home Cleo makes a very grown-up eggs benedict for dad and his buddy Sammy (Chris Pontius). Then Johnny must get Cleo to her boarding camp and its a fraught journey, ending with a helicopter lift to the waiting car service. This fly-on-the-wall film has been accused of many things - indulgence, stasis - but Coppola's observations come through loud and clear. Dorff's just right as Marco (Johnny Marco - hmmm, Johnny 'Don Juan DeMarco' Deep has lived at the Marmont), a nice enough guy whose untethered life is as addictive as Valium and the assured Fanning is just the jolt he needs. The film is often funny (Marco's enthusiasm for the painfully amateurish pole dancers) or otherworldly (the Milan hotel suite complete with swimming pool) when it's not just being matter-of-fact. "Somewhere" captures a state of mind, a mood, a tone and for a film where 'nothing happens,' it leaves its protagonist in a very different place than where we found him.