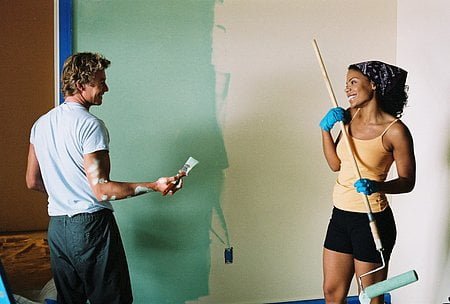 Kenya McQueen (Sanaa Lathan, "Love & Basketball," "Alien vs. Predator") is a successful professional black woman whose career ambitions and picky dating qualifications have shelved her as a perpetual single, but her coworker Leah (Katharine Towne, "Mullholland Drive") fixes her up on a blind date that turns out to be "Something New."

Music video director Sanaa Hamri and screenwriter Kriss Turner (TV writer for "Whoopi" and "Everybody Hates Chris") were shocked to discover that 42.4% of black women have never married. Taking that as their jumping off point, the two created an ambitious senior bank manager who is surprised to discover the man she can be most herself with is white. But while "Something New" is visually creative, the story is just romantic comedy cliche with a dollop of racial relevance. Even worse, Kenya is such a joyless creature it requires singular suspension of disbelief to accept that Brian Kelly (Simon Baker, "The Ring Two," "Land of the Dead"), the white landscape architect, would stick around. When fast tracking Kenya enters the Magic Johnson Starbucks, she never considers that the only white man in the building is the man she's supposed to meet. Kenya flounders to the point of rudeness, clearly unwilling to consider a man outside of her own race. She's further embarrassed at Leah's engagement party when upon admiring the landscaping, Leah's mom introduces her to the man who did it - Brian Kelly. It's awkward, but she hires him, although she rejects his Golden Retriever Max ('I don't do dogs') and her younger brother Nelson (an annoying Donald Faison, TV's "Scrubs") insults him. Brian tells Kenya 'I take hard earth and make things bloom,' and obviously he's determined to do the same with her, but once Kenya 'lets go with the flow' the relationship travels a rocky road within Kenya's circle of friends and family. "Something New" trots out all the old chestnuts. There's the successful professional who has to learn that work isn't everything versus the dreamer who's followed a happier path. There's the interfering family who present the 'perfect match,' in this case Blair Underwood's Mark, to prevent true love. There's the Greek chorus of three girlfriends, Cheryl (Wendy Raquel Robinson, "Rebound"), a lawyer who takes a chance with a chef (Mike Epps' Walter), Suzette (Golden Brooks, "Beauty Shop"), the beauty and dieting guru and Nedra (Taraji P. Henson, "Hustle & Flow"), the bawdy commentator. There's also the too perfect man in Brian whose only fault appears to be for having fallen for nothing but a pretty, albeit black, face. The racial issue rears its head one night when Brian is too tired to listen to Kenya rail on about 'the black tax,' the above and beyond effort that must be made to succeed in a white world. This causes the breakup necessary to all flicks of this genre so that Kenya will learn that Brian feeds her soul and Mark doesn't. The filmmakers do have the sense not to make Brian's entrance into Kenya's circle too black and white - Brian is accepted by some (Cheryl, Kenya's dad) and viewed with suspicion by others (Kenya's snobby mother Joyce (Alfre Woodard, the newest Desperate Housewife), her brother, friend's boyfriend Tony). But "Something New" is also the type of film that thinks it's being progressive by showcasing black high society. The film, with its constant theme of color, not only looks good but has a noticeably different visual style from the conventional Hollywood offering (cinematography by Shane Hurlbut, "The Greatest Game Ever Played"). Music (by Rosey, "Monster-in-Law") is also unique, not the typical made to sell soundtracks hits collection or sappy romantic strings. Also in its favor is a solid wrapup which finds Kenya alone again attending the cotillion she once debuted at years earlier. As the young black couples swirl in their black tuxes and white gowns, Kenya realizes what she needs and retrieves her own splash of white to the party outfitted in a too-small borrowed suit in the color Kenya once abhorred - red. "Something New" is presented with some style and imagination, but at its core it's the same old story.

Kenya McQueen (Sanaa Lathan), a fast-track corporate attorney, is, in her mind, a statistic – 42.2% of all African American women will never marry and she is sure that she is one of that number. Against her better judgment, she accepts a blind date. Fingers crossed, she’s hoping for an IBM (ideal black male), but doesn’t expect to meet Brian Kelly (Simon Baker), a hardworking landscape architect. There’s a problem, though. He’s white and “Something New.” This is the kind of movie not meant for a fifty-something grumpy old white guy to see and enjoy. This is a by the numbers, new-millennium liberal, wears its heart on its sleeve kind of film that is targeted for tweenie girls. And, I think it hits the target if the positive buzz from the screening audience – “I’d see it again!” and “I give it five out of five!” were a couple of quotes I heard – is any indication. Sanaa Lathan, who made a solid debut with “Love and Basketball,” gives nice character to Kenya (fortunately, the seemingly pretentious name has a reasonable explanation). The hardworking, pretty, intelligent, well-to-do daughter of a prominent doctor (Earl Billings) and his social snob wife (Alfre Woodard) is too good to be true. But, a hidden bit of bigotry wells up from inside her when she meets her blind date, Brian. She calls it off before it even begins. Two things bring them together again, though. She just bought a nice house in desperate need of landscaping and Brian is the ideal man for the job. Brian’s honesty, kindness (he, of course, owns a big, cuddly dog named Max), dedication to his work, down to earth nature (he drives a beat up old pickup) and sensitivity begins Kenya’s change of heart and a romance ensues. But that bit of bigotry and the advise of her friends drive a wedge between the couple and they break up. Don’t worry though. This is a girl meets boy, girl gets boy, girl loses boy…kind of story. The cast, even though given little more than cardboard cutout characters to play, is made up by seasoned veterans. Billings and Woodard are joined by Mike Epps, Donald Faison, Blair Underwood and Tarija Henson but they are all saddled with predictable personae. Scripter Kriss Turner gives them all by-the-numbers personalities that they gamely, if shallowly, inhabit. The good-natured predictability will satisfy the target femme aud, though. There isn’t much by way of chemistry between Sanaa Lathan and Simon Baker but the actors’ likeability quotient helps make “Something New” a light romantic comedy for the girls out there. It’s not my cup of tea but I’m not wearing the bull’s eye it’s aimed at.