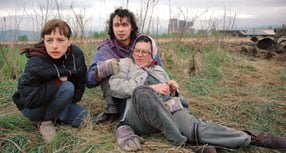 Monika (Tatiana Vilhelmova) longs to move to America to be with her transplanted boyfriend, Georges. Tonik (Pavel Liska) secretly longs to be with his childhood friend and sweetheart, Monika. Their friend, single mother Dasha (Anna Geislerova), believes that her married boyfriend will take her away from her daily childrearing choirs even as she slips further and further away from reality. But, her quickening spiral down into psychosis may just be the catalyst for Monika and Tonik to find “Something Like Happiness.”

Young Czech Monika (Tatiana Vilhelmová, "The Wild Bees") is waiting for the day her America bound boyfriend Jiri will send for her while her girlfriend Dasha (Anna Geislerová, "Zelary," "Lunacy"), who has two little children, falls into an alcoholism while having an affair with Jára (Marek Daniel, "The Wild Bees," "Up and Down'). When Monika's wishes collide with responsibility, her childhood friend Toník (Pavel Liska, "Up and Down," "Lunacy") who has always loved her, begins to realize "Something Like Happiness." Writer/director Bohdan Sláma ("The Wild Bees") has captured those type of childhood friendships grown into maturity which are encircled by loosely connected sets of parents all long time acquaintances because of their kids. This global phenomenon is given a sharp pang with its local setting, a dream-crushing industrialized part of the Czech Republic, and Sláma works the two dynamics to bittersweet effect. 'Didi,' as Dasha's friends call her, is often the worrisome meeting point between Toník and Monika and when she must enter rehab just as Jiri's written with offers of plane tickets and work, Monika, despite mom Soucková's (Simona Stasová, "Divided We Fall") encouragements to leave, does the honorable thing and stays to care for Dasha's children. Monika and Toník form a makeshift family, even moving out into the country, although Monika still speaks and dreams of Jiri. Once again acting hideously, Dasha, released from hospital, grabs back her kids in the midst of a birthday party and Monika resumes her plans, but what of Toník? Pavel Liska gives Toník a downtrodden sensitivity and innate sweetness that makes him a black horse to root for, and Tatiana Vilhelmová imbues Monika with a clean cut goodness that marks her the girl for him. They're wildly contrasted with Marek Daniel's womanizing Jára, who wants only the fun and shallow in life. Geislerová has a more difficult job, but she retains something in Didi that explains friendly loyalty, even though the character's last appearance is offputting. What Sláma does best is present their interconnectedness, a web constructed through years. In the film's best sequence, Toník gets drunk with Monika's dad Soucek (the Geoffrey Rush-like Bolek Polívka, "Divided We Fall, "Wild Flowers") on Christmas Eve with respective feelings for Monika recognized but not really spoken. Sláma caps it humorously with Toník's disapproving father (Martin Huba, "Up and Down") finding them slumped in the hallway the next morning. And that's just it - with "Something Like Happiness" writer/director Sláma is able to capture the way those eternal moments feel. Those few apartments in that gray town have a sense of family and community those lucky among us can relate to.

This is a love triangle film that keeps you hoping that the two people that should get together do get together. But, don’t expect to get, exactly, what you hope for as this nicely done Czech film, written and director Bohdan Slama, keeps things moving in different, unexpected directions. Unlike American films, things don’t wrap up with all the ends nicely tied up. Instead, there is still a question of what may happen (with a hopeful impression left in the viewer’s mind) as the story finishes on its positive, though not a fait accompli, note. The cast is well played with the characters being people, not caricatures or stick figures. It’s a simple story as Monika has her dreams of going to America while Tonik simply wants to be with his lifelong sweetheart. Anna Geislarova is terrific as the psychotic mother who should be a poster child championing abstention from drugs, booze, sex and birthing babies. Something Like Happiness” has, even when compared to independent American films, a shoestring budget but the dedication of the writer/director and his cast make it a worthwhile film for the movie buff.