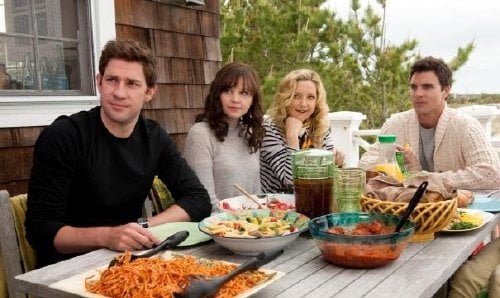 Rachel (Ginnifer Goodwin, HBO's 'Big Love,' "He's Just Not That Into You") has always existed in the shadow of her sunnier, center-of-attention best friend Darcy (Kate Hudson, "Bride Wars"). When she attends law school at a different college, Rachel meets Dex (Colin Egglesfield, TV's 'All My Children,' 'Melrose Place') and is completely smitten. Somehow, though, she fumbles his pass at a celebratory dinner and Darcy moves in. Years later with Darcy and Dex's wedding looming, Dex and Rachel's long buried attraction begins to bloom again and it just may be the groom that holds the role of Darcy's "Something Borrowed."

Television writer Jennie Snyder ('Gilmore Girls,' '90210') has adapted Emily Giffin's novel (which is itself a different spin on the Julia Roberts movie "My Best Friend's Wedding") and it's the kind of story with two kinds of people - smart ones who do stupid things and irresponsible party animals. All of them have the type of unearned wealth to blow $2,000 on a Chanel bag or hop a plane to London to have a *conversation* or get a $2 million home in Westchester as a wedding gift from daddy. Director Luke Greenfield (2004's "The Girl Next Door") miraculously keeps his cast likeable throughout a lot of nonsense. One exception - Kate Hudson, who seems to have the confidence to portray a less than sympathetic character, having gone from the shrill witch of "Bride Wars" to a bossy, self-absorbed lush here. The film's kickoff is a surprise 30th birthday party thrown by Darcy for Rachel where all the seeds are sown for the overlong and overbaked proceedings. Ethan (John Krasinski, TV's 'The Office') is the shared 'boyfriend' of the two girls from their childhood who clearly sides with Rachel, sniffs out what is going on and offers sage advice. He also notes how Darcy has made herself the center of attention at Rachel's party, right before Darcy goes into a presentation on just what Rachel means to her that defines the two sides of Darcy's character, one obnoxious spotlight grabber, the other truly appreciative friend. When Darcy goes home drunk, she forgets that pricy bag and Dex returns for it and ends up having a nightcap with Rachel. Sparks fly. So what does one do when one is torn between loyalty to a friend and an obvious soulmate? Especially when the group has rented a summer cottage for weekends together in the Hamptons? Rachel stews, gives in to temptation, frets and unloads on Ethan, who rightly points out that Dex isn't doing anything but stringing her along. Dex keeps trying to talk to Rachel, but is being held to the flame by dad (Geoff Pierson, SHOWTime's 'Dexter') to 'do the right thing' and to go through with a wedding that his mother (Jill Eikenberry, TV's 'L.A. Law'), who has some kind of horrible illness, is so looking forward to. Darcy parties down and tries to fix Rachel up with Dex's horntoad friend Marcus (Steve Howey, "Bride Wars") while, in the least of the romantic subplots, Ethan tries to deflect the attentions of Claire (Ashley Williams, TV's 'Saving Grace') by telling her he is gay (Really?! That chestnut still lives?). Never once is it believable that Dex would be with Darcy - she'd embarrass his finer sensibilities, not to mention his Waspy family and he's way too quiet and grounded for her. Ethan keeps a secret that shows, in an unironic way, that he's avoided doing exactly what he tells Rachel to do. Only in Rachel's psychological makeup is there a hint of truth, and it's a good thing because Goodwin is very endearing in the role of a woman whose lack of self worth keeps her from believing she deserves what Darcy gets. One can almost hear Colin Egglesfield's agent pitching him as 'the new Tom Cruise,' because the actor not only resembles the star but has appropriated his acting style - minus Cruise's flinty mad streak. It's like a Tom Cruise who would hide behind momma's skirts with his puppy rather than rappel off a building. Krasinski's got great likability and comic timing, despite the fact that the script forces him to be dishonest and withholding. Howey is entertaining, if also yanked into a third act behavioral turnaround while Williams is playing to the rafters. The production looks good, with Manhattan locations like the M1-5 Lounge in Tribeca (just the place to audition a wedding band!) and the Shake Shack in Madison Square Park, but it should with all the carefree consumerism on display. But "Something Borrowed" has a cast that's too good for the script-manipulated characters they play.