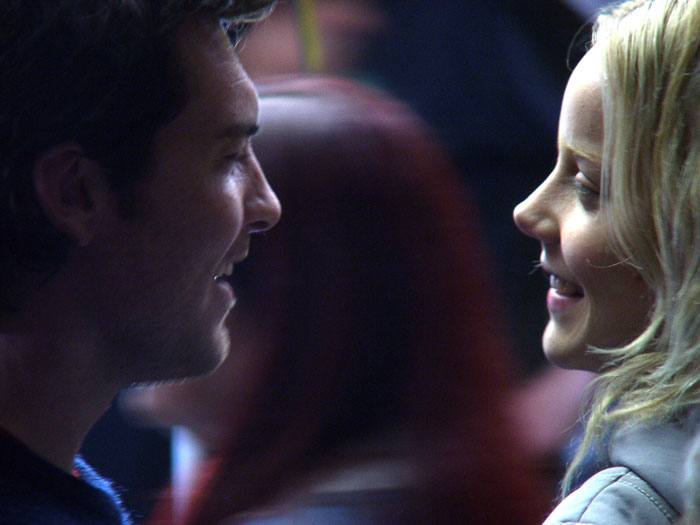 Sixteen year-old Heidi (Abbie Cornish) makes a major mistake when she first experiments with sex by kissing her mother's boyfriend (Damian De Montemas). Believing she has crossed a line of no return, Heidi runs away to the ski resort of Jindabyne in the Snowy Mountains south of Canberra and tries to begin a new life in writer/director Cate Shortland's "Somersault."

This is a coming of age film that matters, an incredibly assured feature debut for Shortland and breakout performance for its star. Australia and New Zealand are racking up an impressive slate of female directors making extraordinary female coming of age films, most recently with Christine Jeffs' 2001 "Rain" and Niki Caro's 2002 "Whale Rider." "Somersault" is the most powerful and it made history when it became the first film to Win all thirteen of the 2004 Australian Film Institute awards. Heidi's first stumbling attempts to make connections in Jindabyne are not the right way to establish a reputation. She goes home with a local clubber only to discover from his friends in the morning that he has a girlfriend. Trying to find work, she comes on to Richard (Erik Thomson), the owner of a ski shop, who resists her advance (and appears later where she least expects him). Outside his store, Heidi spies an older man eyeing her from his car and starts to approach when his wife gets in and he drives away. Things begin to turn around when she meets Joe (Sam Worthington, "Dirty Deeds," "The Great Raid"), the son of a wealthy farmer who had been watching her in the club. 'I've done bad things,' she tells him and he's drawn to her openness even as it goes against his own natural inclination to remain closed. He takes her to a local motel and the next day she meets the owner, Irene (Lynette Curran, "Japanese Story"), who fixes her up with an affordable apartment in the back, a place where her son usually lives. She gets a job, working with Bianca (Hollie Andrew) at the local BP station. But relationships are fragile and the ones Heidi has made begin to come under attack. When Joe, who is confused by his own feelings for this strange girl, cannot give voice to his feelings for Heidi, she assumes rejection and returns to her earlier, desperate behavior. But from great pain comes forgiveness. Abbie Cornish is a marvel as Heidi, from the way she offers herself to her hysterical mother (Olivia Pigeot), all shaking, trembling supplication to the way she abandons control of her body to two other actors when her character is naked and drunk. She has the delicate paleness of Nicole Kidman but with youth's patina of tough resilience. Her penultimate scene, where she finally breaks down in tears to Irene, is incredibly moving. Lynette Curran plays that pivotal character well. Irene is, of course, Heidi's mother substitute and Curran conveys maternal warmth overshadowing Jindabyne suspicion. Sam Worthington should not be overlooked as well as his performance grows in complexity throughout the film. At first we see a good looking guy, perhaps a shade more sensitive than most, but just as quick to use a pretty girl. By film's end, Worthington's Joe has undergone a journey of self discovery just as dramatic as Heidi's. (Worthington gets the film's most poetic dialogue in describing what he sees in Heidi - 'When you were young, did your mother ever spray perfume in the air and walk through it? She's like that.' - and delivers it without it sounding like dreamy dreck.) The filmmakers' ability to turn something sentimental into revelatory beauty is also expressed visually by cinematographer Robert Humphreys, who makes Heidi's picture of a unicorn with a glitter mane almost heartbreakingly beautiful. The landscapes of Jindabyne are all bluish pale, the view of a lake outside a motel window a picture of perfection. The film has a gentle pace, yet is so lyrically engrossing it seems to barrel along. Original Music by Decoder Ring gives shimmering aural support to the delicate, if at times brutal, emotions so beautifully captured on film. "Somersault" gets into the heart of a sixteen year old girl making an especially painfully transition into adulthood and expresses it with a moving beauty.

16-year old Heidi (Abbie Cornish) screws up big time when she is caught kissing her mother’s live-in boyfriend. Thinking that she has crossed an emotional point of no return with her mother, she packs her bags and buys a bus ticket to Jindabyne, a small Australian ski resort town, where she hopes to find a new life in Somersault.” First time feature writer/director Cate Shortland has created a quietly intense character study of a young woman’s sexual awakening. Abbie Cornish embodies the naiveté and sexual allure of pretty, mature-looking Heidi who will learn important lessons about the difference between sex and love. Heidi’s father abandoned her and her mother years before and the girl had to grow u being tough skinned and resilient. The woman/child that Heidi is may bend but she won’t break. She meets Joe (Sam Worthington), the son of a wealthy farmer, and the two fall for each other. They share a motel room and, the next morning, the motel’s owner, Irene (Lynette Curran), invites the girl to stay in the room that belonged to her incarcerated son. Things continue to look up when she gets a minimum wage job working with Bianca (Hollie Andrew) at a local gulp’n’go. But, Heidi’s self-destructive ways come back to haunt her when, angry with Joe, she picks up two guys at a bar and brings them home. Things get dicey with the horny guys and Heidi looks to be in big trouble until Joe intervenes to save the day. Joe’s surly but caring ways and Irene’s wise advise that the girl will be welcomed at home, no matter what, brings Heidi to a state of enlightenment and understanding. Somersault” is a solid debut for Cate Shortland, winning 13 Australian Film Institute awards (the first time a film won for every category – including Best Film, Best Director, Best Original Screenplay, Best Lead Actor and Best Lead Actress). She is an exciting new talent whose future works I will greet with great expectations. Abbie Cornish, too, has an excellent calling card for her future endeavors as she effectively portrays Heidi as a tough, naïve, fragile and sexually awakening young woman. Sam Worthington, as Joe, comes across as a young man whose wealth has made him a bit of a cynic, closing him off from others until Heidi comes into his life. Like Cornish, Worthington gives an arc to his character as he opens his heart because of Heidi. Lynette Curran, as Irene, is Heidi’s surrogate mother and the warmth and love that live within the woman are palpable. Production and location, with a budget that probably wouldn’t pay the livery bill for a Hollywood movie, are well suited in “Somersault” with its winter wonderland small resort town. Cinematographer Robert Humphreys uses dark, blue-hued monochrome to show the coldness of the exteriors while interior shots are bathed in warmer tones. Color and brightness always surround Heidi right down to her bright red gloves that are like dazzling beacons in the dark exteriors. Somersault” is a quiet, lyrical study of one young woman’ search for self-forgiveness and redemption. This is an honest movie that should, but probably won’t, be seen by the tweenie crowd. Unfortunately, that audience will not even have it on its radar.