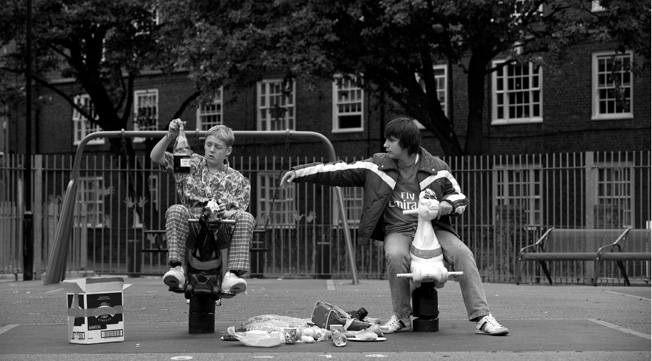 Marek (Piotr Jagiello) is a Polish immigrant living with his father. Tomo (Thomas Turgoose, "This Is England," "Eden Lake") is a Midlands runaway living by his wits. When the two boys meet, they're both outsiders who realize they stand a better chance of survival by banding together. Even when Tomo meets Maria (Elisa Lasowski, "Eastern Promises"), the woman Marek quietly idolizes, something which could normally cause a rift strengthens the bond these two boys have forged in "Somers Town."

"Somers Town" could almost be seen as an upbeat sequel to Meadows' searing last film, "This Is England," which featured the same young extraordinary star in Thomas Turgoose. If "England's" Shaun didn't have his mum to fall back on, he could easily have run away to London to escape the rival Skinhead groups trying to induct him. It is the character of Tomo that maintains director Shane Meadows' ties to the Midlands as he ventures outside of them for the first time with this, his sixth feature film, the second he has chosen to shoot in black & white. One of the great things about Paul Fraser's ("TwentyFourSeven," "Dead Man's Shoes") script is that it keeps you guessing, even about such fundamental 'facts' as whether Mariusz (Ireneusz Czop), who enjoys a buddyish relationship with Marek, is really the boy's father or just posing as such because of their citizenship status. Then there are the pleasures of watching the quiet, polite and studious Marek collide off the brash, hustling, street smart Tomo. When shady local businessman Graham (Perry Benson, "This Is England") offers Marek a five-spot to rent lounge chairs then springs the 'catch' that they must be sanded down first, Tomo, who's weaseled his way into the deal, tries to double down. Marek gives Tomo a place to crash, but Mariusz is more cautious and when Tomo finds another 'home' Meadows and Fraser again give us pause about exactly what this new relationship is. But there's really no need to be worried - Meadows has left "England's" darkness behind here. Using a mostly static camera (Natasha Braier, "XXY") and staying in one location until the film's final minutes, Meadows gives his film so much forward thrust it feels like a road movie as it follows the ramblings of his two young leads. Newcomer Piotr Jagiello has the dreamy air of an artist whereas Turgoose continues with the cheeky confidence he portrayed in "England." Perry Benson is a hoot as the conniving Graham and "Red Road's" Kate Dickie makes two brief appearances as a Scotswoman. "Somers Town" is a small film with a brief running time, but it's a lovely piece of work, well acted, its working class locales made beautiful by Braier's black & white lensing. The film does shift to color for the videotaped last bit, a rather fantastical trip made by the two protagonists which may have been fit into the script as a sop to the film's sponsor, Eurostar.