Some Kind of Heaven 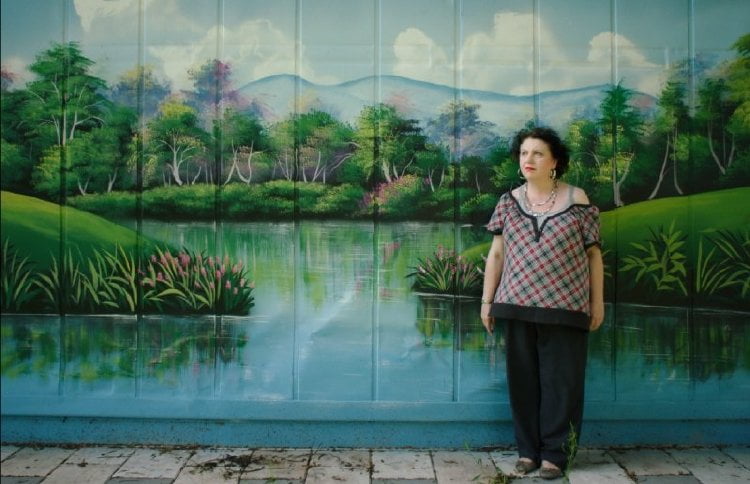 45 miles from Orlando over 120,000 seniors live in America’s largest retirement community, The Villages, which sprawls over an area larger than Manhattan.   It was designed as a ‘Disneyland for Seniors,’ a self-contained fantasyland where there is something for everyone, from synchronized swimming to golf cart parades to singles events.  And yet, some of the people who migrate here find themselves on the fringes of “Some Kind of Heaven.”

While many will have heard of The Villages for the outbreak of election animosity that occurred within its borders, first-time feature director Lance Oppenheim, who grew up in the area hearing about the often salacious stories emanating from the retirement community, wasn’t interested in that (we do see one group of women dressed in Uncle Sam outfits twirling batons).  Instead he follows those who can’t quite seem to embrace this lifestyle, presenting them within this dream world in a stylized production which recalls both Busby Berkeley musicals and the saturated Technicolor romances of the 1940’s and 50’s.

There is the married couple, Anne and Reggie Kincer, about to celebrate their 47th anniversary.  Anne appears happy taking up all the group activities which surround her, and, initially, happy with her ‘eccentric’ husband, but Reggie’s behavior becomes increasingly off kilter, his tai chi with a golf club out on the course escalating into psychedelic drug use which lands him in court.

Dennis Dean, a former handyman to Hollywood stars, lives in his van which he parks on Villages property, constantly evading security.  The man I came to think of as the ‘van gigolo’ hopes to find a woman who will both meet his attractiveness standards and have enough money to keep him comfortable.  As people, especially the women who swim in the pool he frequents, begin to get wise, things get so bad for Dennis he contemplates suicide…until an ex-girlfriend lets him move in with surprising results for him if not for her.

But the film’s most embraceable subject, sure to be one of 2021’s most soulful characters, is former Boston native Barbara Lochiatto, whose life in The Villages took at abrupt turn for the worse after the death of her husband.  She has to return to a part time job to afford the lifestyle her husband had wanted while she pines for home and wanders aimlessly from one group activity to the next, until she meets ‘the margarita man’ of the complex’s Parrothead Club, Lynn Henry, when she considers buying one of the ubiquitous golf carts.  Will she now have more company than her randy Yorkie and cat?  I’m not telling, but if it were possible to nominate someone for acting in a documentary, Lochiatto would have my vote, her childhood memory soliloquy during a drama club class a true knockout (plus she kind of resembles Anna Magnani).

Oppenheim wends his way in and out of these stories to give us a larger perspective, focusing on the many clubs and various other residents, like a couple impressed with the vacant cookie cutter ranch they tour because of its conformity and the abundance of palm trees.  Cinematographer David Bolen's ("1BR") meticulous composition and candy colored palette are standouts as is Ari Balouzian’s ("Feels Good Man") lushly romantic old Hollywood score, both giving Oppenheim’s film its otherworldly vibe.  There is a disturbing undercurrent here too, a denial of reality commented upon by Anne.  With “Some Kind of Heaven,” Oppenheim’s created a spiritual successor to Errol Morris’s “Vernon, Florida" with the style of Todd Hayne’s “Far from Heaven.”  It’s a must see.

The Villages, Florida, is the foremost retirement community in the state, if not the entire country. It is, on the surface, the “Disneyworld of retirement” for its 100000+ residents. For four community members, though, it is something less than the idyllic world they expected in “Some Kind of Heaven.”

After making documentary shorts for a decade, director Lance Oppenheim makes the plunge into feature length docs with his in-depth study, often funny and sometimes not, about the Villages, in general, and three of its residents and one interloper. Recent widow Barbara, couple-in-crisis Reggie and Anne and outsider looking for a sugar mommy while living in his van, Dennis are the other side of the coin of The Villages.

As the documentary unfolds, we are given a “tour” of the vast retirement community and see such fun activities as synchronized golf cart driving, pickle ball games, dance lessons, drum lines, synchronized swimming, a nightclub and more. For the residents who embrace the old-fashioned village vibe, it is that retirement world where “we come to live, not to just pass away.”

Then, director Oppenheim turns his camera to his four subjects. The plight of Anne and Reggie comes from his entering the early stages of dementia and his erratic and destructive behavior from it. You feel for Anne and grow to understand what early dementia means and its impact on the spouse. Dennis, on his hunt for his sugar mommy, has the philosophy to “live fast, live hard and die poor.” Unfortunately for the conman, he may get his wish for the “poor” part.

For me, though, Barbara’s story has the greatest impact, probably because of Barbara. She lost her husband, Paul, to brain cancer, only four months ago. What should have been the promised idyllic retirement, turned into something less than ideal. She must work full time to make ends meet and really wants to return home to New England.” Hers is the most compelling life story and the filmmaker could have built the project around just Barbara.

You, the viewer, may see the Villages as the holy grail of retirement plans. For others, like me, it may not be heaven the brochures promote. Either way, Oppenheim and his documentary team do an excellent job in showcasing the community and its many benefits. It also shows that “heaven” is in the eye of the beholder.