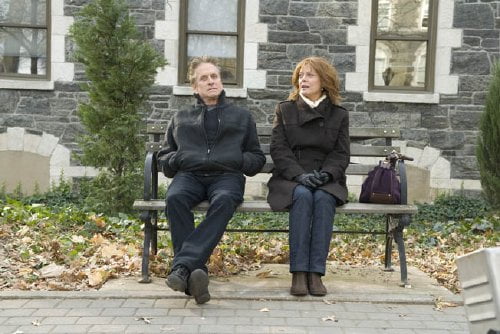 Ben Kalmen (Michael Douglas) is almost sixty years old, has been tom catting around for years and is leveraging his current girlfriend Jordan's (Mary-Louise Parker, SHOtime's "Weeds") connections to open a new car dealership in the location which will save his whole Tri-State chain. But Jordan insists he accompany her daughter Allyson (the Scarlett Johanssonesque Imogen Poots, "Me and Orson Welles") to her college interview and when he cannot keep his hands where they belong he suddenly finds himself with nowhere to turn, a "Solitary Man."

Since Oliver Stone's "Wall Street" sequel got bumped to the fall in order to secure a berth at Cannes, this Anchor Bay distributed indie is keeping Michael Douglas in the public eye in the interim. His performance as the deplorable Kalmen is inexplicably being described as his best since "Wonder Boys," perhaps because he manages to keep us from giving up on Ben no matter how low the character sinks. But in reality, Douglas isn't doing anything new here and Kalmen's likability hinges on how he reacts to one situation which we must assume was written in codirector (with his "Knockaround Guys" partner David Levien) Brian Koppelman's unbalanced script. Before Ben's even slept with his girlfriend's daughter, we know he's desperate as he's hit his daughter Susan (Jenna Fischer, TV's "The Office") up for a loan. We get a fuzzy idea that the businessman, once known as New York's most honest car dealer, got caught up in running a leasing scam which has tarnished his reputation. Even though his professional redemption lies in Jordan's hands, Ben balks at using his influence with the dean of his former alma mater (Fordham University standing in for an unidentified Boston campus) for Allyson, but gives in when Jordan holds her trump card. Allyson's not crazy about spending time with Ben, either, but when he finds her being hit on at the hotel bar by a college jock and promptly analyzes the situation, the two find a connection which turns sexual. (It is Ben's reaction to Allyson after she throws the indiscretion in her mother's face that keeps us on his side, a sort of honor among thieves stand.) It's a familiar story - the sorry scoundrel goes down and finds friendship and acceptance in unexpected places. The problem is, not only do Koppelman and Levien make us work to put together Ben's actual downfall, they give him too many easy outs. Ex-wife Nancy Kalmen (Susan Sarandon), now a successful real estate agent, is all too free of any bitterness. Ben's daughter isn't pleased when he misses his grandson's birthday party but doesn't get really upset until her father sleeps with one of her son's playdate's mom. Only his son-in-law, Gary (David Costabile, TV's "Damages"), seems to have his number. The filmmakers really cross the line with the character of Jimmy Merino (Danny DeVito), the 2nd generation campus deli owner who hasn't talked to Ben in thirty years but give shim a home, a job and a compassionate ear. This sinner is just surrounded by too many saints. There's a secondary likability subplot involving a college student, Daniel Cheston (Jesse Eisenberg, "Zombieland"), whom Ben gives a much needed confidence boost to as far as the opposite sex goes that's nicely played (the performance of "The Wackness'" Olivia Thirlby as Cheston's new squeeze adds immeasurably), yet makes the film seem overstuffed. The film also features some truthful support from character actors Richard Schiff ("Last Chance Harvey") as Ben's banker and Ben Shenkman (TV's "Damages") as his dealership franchise broker. "Solitary Man" has modest production values. Alwin H. Kuchler's ("Proof," "Sunshine") lensing gives the film the feel of perpetual overcast skies. The Bronx's City Island deli is the site of Merino's, giving the film a unique connection to distributor Anchor Bay's prior release, "City Island." In the end, the filmmakers provide their "Solitary Man's" behavior with an explanation which feels too pat and under cooked. In these days of hard financial times, Ben's redemption is a down-and-outer's dream come true.