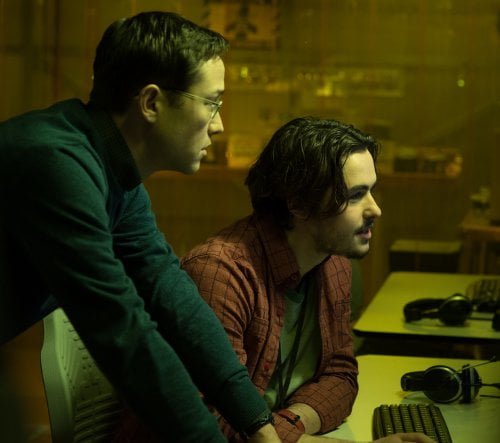 I imagine that the name of Edward Snowden is known by the many far more than the few. He dominated the headlines in 2013 when he publicly leaked thousands of secret CIA and NSA documents revealing illegal domestic surveillance of millions of US citizens, their phone calls, emails and internet interactions. Oliver stone tells the whistleblower’s story and why he did what he did in “Snowden.”

In 2013, the world learned that the U.s. National Security Agency had been illegally accessing private information on a global basis, including spying on allies, with the cooperation of such telecommunications companies as Verizon. Thousands of documents had been leaked to Glenn Greenwald (Zachary Quinto, "Star Trek Beyond" and Ewen MacAskill (Tom Wilkinson, "Selma") of the Guardian and filmmaker Laura Poitras (Melissa Leo, "The Fighter") (whose multi-day shoot of the meetings in a Hong Kong hotel room became the Oscar winning documentary "CitizenFour"). The whistleblower, a former C.I.A. employee working as a contractor for the NSA, was quickly identified and charged under the U.S. Espionage Act, but managed to board a plane to Moscow. With his passport revoked by the State Department, three years later Russia still gives asylum to "Snowden." Cowriter (with "The Homesman's" Kiernan Fitzgerald)/director Oliver Stone's ("Platoon," "Savages") filmography is full of politically controversial films from "Salvador" through "JFK," "Nixon," "W." and his "The Untold History of the United States" documentary series. He takes a firm stance with "Snowden," his best feature film since 1999's "Any Given Sunday." The film, which begins in shrouded Hong Kong secrecy, flashes back to pick up Snowden's (Joseph Gordon-Levitt, "Looper") story in 2004 when he enlisted in the Army. The conservative young man's Special Forces hopes were curtailed in boot camp when he received an administrative discharge after breaking both legs. From the get-go, Snowden's patriotism would prove painful. Oliver Stone traveled to Russia nine times to meet with a wary Snowden, eventually earning his trust. His film works on two levels - as a look at the man behind the headlines and as a technological procedural. Most have formed an opinion on Snowden, but until now, we've heard little about the events that changed his perspectives and the isolation it caused him. Most have an idea of the import of the information he released, but few probably understand just how all encompassing and invasive the methods used to collect it were. Put these concepts together and we see Snowden evolve from a shocked C.I.A. field operative to a contractor disillusioned by Obama's promises of transparency, his relationship with Lindsay Mills (Shailene Woodley, "The Fault in Our Stars") suffering because of clearance secrecy. After impressing C.I.A. instructor Corbin O'Brian (Rhys Ifans, "Alice Through the Looking Glass") with his genius level computer facility (he completed an assignment with a five hour average in 38 minutes), Ed is still in the D.C. area when he meets amateur photographer Lindsay through a nerd-geek match site. They click immediately, even though they're of opposing political persuasions. By the time Ed's assigned to Geneva to maintain network security, he asks Lindsay to go with him. The first red flag goes up when Ed meets Gabriel Sol (Ben Schnetzer, "The Book Thief," "Warcraft"), a friendly geek who exposes him to NSA's data collection abilities. Things escalate when a CIA agent (Timothy Olyphant, TV's 'Justified') shepherds him into field work, asking him to follow Al Qaeda money by befriending bankers. Ed's shy nature works against him at a diplomatic party, but when Lindsay charms Marwan Al-Kirmani (Bhasker Patel, "My Beautiful Laundrette") by appealing to his expertise, Ed's off and running. Gabriel assists with a data search, first spying on the man's sister-in-law undressing in her hotel room by using the webcam of her turned off laptop, then digging up dirt on his daughter's boyfriend. The agent's thrilled with Snowden's intel and gets Al-Kirmani, whose daughter has now attempted suicide because of their actions, drunk and puts him behind the wheel, the better to blackmail the man. Horrified by what's he's seen, Snowden resigns from the C.I.A. As a contractor, Ed worked in Tokyo before getting a plum assignment in Hawaii, which Lindsay believed would be good for his health (he had been diagnosed with epilepsy, stress a contributing factor to his seizures), but after discovering a backup program he'd written was being used for even higher levels of surveillance than he'd previously witnessed, he decided to act. Stone was smart to highlight Lindsay's prominence in Ed's life, as, ironically, the romance emphasizes his loneliness. Edward's actions are often misconstrued by the photographer whose partner once playfully posed for her camera and has now become paranoid around lenses. Snowden's camera aversion reverberates as he enters and exits NSA's Oahu facility, having to pass by x-ray machines (and Stone may just have provided the answer as to how Snowden smuggled out that thumb drive, a trick an amused Snowden would neither confirm nor deny during a post-screening Q&A live hookup from Moscow.) The director also uses Hank Forrester (Nicolas Cage), an NSA employee whose outspokenness landed him in an instructor's position, to lay the groundwork for what happens to those who attempt change from the inside (look up Thomas Andrews Drake and William Binney). Forrester's mentoring of Snowden informs the latter's later tactics. Once Edward meets Gabriel, Stone often uses computer screen shots and graphics to emphasize the vast reach of the NSA (Gabriel's nickname for Ed, 'Snow White,' emphasizes Snowden's moral ground). Stone's oft-used hallucinatory effects make brief appearances during Snowden's epileptic seizures, but his most audacious scene features Edward reporting to O'Brian via a wall sized screen, Corbin looming over his recruit like Big Brother (Ifans proves canny casting, the actor both paternal and malevolent, his character a staunch believer in security over freedom). Gordon-Levitt works hard to get Snowden's voice, coming awfully close. It's an earnest performance of a serious, very intelligent young man who is not afraid to proclaim his own merits. Woodley can't do much to elevate the girlfriend role, but she enjoys an easy intimacy with her costar and their bond convinces. Stone's film has put Edward Snowden back in the spotlight, petitions for pardoning ramping up. But will those who think Snowden a traitor be inclined to listen to Oliver Stone? Grade:

Some think that Edward Snowden is a criminal and traitor who should be punished for the betrayal of his country – even executed, some say. Others, like me, see the man as a hero who brought to our attention the illicit and clandestine government surveillance of our own citizens. Oliver Stone, I think, is of the latter school of thought. This should not come as a surprise from the man who wears his liberal heart on his sleeve and created such films as “Salvador,” “Platoon,” “Born on the 4th of July” and “JFK.” “Snowden” begins in 2013 as documentary filmmaker Laura Poitras (Melissa Leo) and journalist Glenn Greenwald (Zachary Quinto) secretly meet, for the first time, with Edward (Joseph Gordon-Levitt) in a hotel room in Hong Kong. He begins to tell them his story, showing the proof of the US intelligence community’s clandestine and illegal acts. Then, the film flashes back to 2004 and Special Forces School where the future whistleblower is training to be a Green Beret. This ends, suddenly, after a fall and he learns that he has been walking and training for weeks on a pair of broken legs. He is administratively discharged from the army and is at loose ends. With his military career abruptly terminated, Snowden and his talent to code and interpret data brings him to the CIA where he is fast tracked by his mentor and instructor, Corbin O’Brian (Rhys Ifans). As the years ensue, Snowden learns more and more about the US intelligence services and their warrantless surveillance of American citizens and foreign governments – like hacking German Chancellor Angela Merkel’s cell phone. Eventually, the knowledge becomes too much to keep to himself and Snowden makes the decision to go public. The results and aftermath are well known. “Snowden” moves back and forth in time, covering the years leading up to his reveal. It keeps coming back to the Hong Kong hotel room and the ongoing interviews with Snowden in preparation of the leak of thousands of classified documents to the Manchester Guardian in England. During those several days, there is a palpable feel of paranoia and tension where Snowden fears that US government agents could kick down the door at any minute and arrest or even kill him. Oliver Stone, who co-wrote the script with Kieran Fitzgerald, based on the books The Snowden Files, by Luke Harding, and Time of the Octopus, by Anatoly Kucherena, gathers a veteran cast to populate this biographical political thriller. Joseph Gordon-Levitt holds center stage in the title role and does an excellent job playing the role and, somehow, sounds just like Edward Snowden. Shailene Woodley, as Snowden’s loyal girlfriend Lindsay Mills, helps temper the tense political atmosphere of the film to bring out the more personal aspect of Snowden’s life and the impact of keeping the government’s secrets secret from Lindsay. This romance helps make this more than just a procedural about exposing government wrongdoing. Technically, “Snowden” is a fine example of how Oliver Stone goes about making a politically charged film. I have one thing of praise and one complaint on the techniques used. When Snowden is summoned by O’Brian, the interview is via video conference. Suddenly, his mentor’s image fills the movie screen in a startling way, a la Big Brother. Then, there is the dumb, images from a video screen being projected onto the faces of the characters, like “WarGames (1983)." (And, it was dumb then, too.) In the end, “Snowden” begs the question: Is he a hero or a villain? The choice is yours.