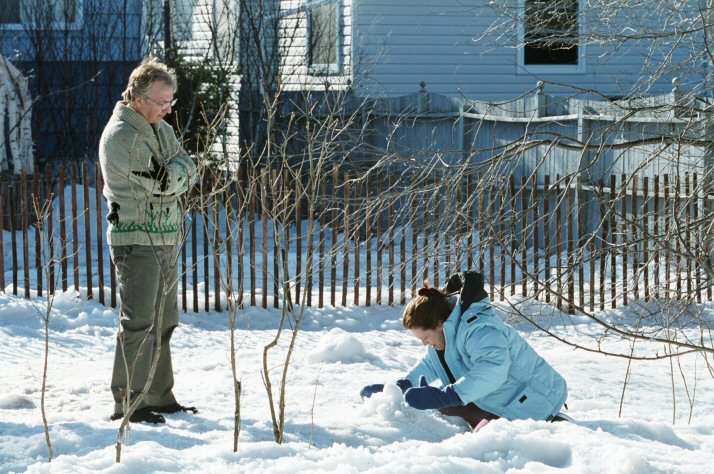 English ex-con Alex Hughes (Alan Rickman) is driving across Canada to Winnipeg to “meet an old friend” but he does not seem too happy about it. At a wayside along his journey he meets Vivienne (Emily Hampshire), a pretty, bright young woman hitching her way to her home town of Wawa. Because of her charming persistence, he grudgingly agrees to give her a ride home. When they stop at an intersection, a tractor-trailer plows into them, killing Vivienne instantly. Now, grieving for what we find out is a second time, he heads to the girl’s hometown to break the terrible new to her mother in “Snow Cake.”

Alex Hughes (Alan Rickman, "Love Actually," "Harry Potter and the Goblet of Fire") is on his way to make peace with his past when he is targeted in a diner by a punkish twenty-something woman intent on getting a ride from him. The taciturn man finds himself opening up and actually enjoying the company of Vivienne Freeman (Emily Hampshire) until a freak accident emotionally strands him again. Determined to speak to the young woman's mother, whom she was heading home to, Alex lands in Wawa and meets Linda (Sigourney Weaver, "The Village," "Infamous"), a frank and functional autistic woman whose idea of heaven is a "Snow Cake." Despite a fine cast, I was very leery going in to "Snow Cake" as films featuring quirky characters with mental illnesses frequently have that 'gack' factor. Then lo and behold, a young actress by the name of Emily Hampshire had me riveted and the film itself took hold. Hampshire's sudden departure from "Snow Cake" is as shocking as the demise of star Janet Leigh was from "Psycho" in its day - she creates that strong a character. But the film belongs to Rickman, whose sexy hangdog charm is perfectly utilized in Alex, a man alone in late middle age with sadness to burn. When Linda Freeman finally admits him into her home on the promise of a gift delivered from Vivienne, Alex enters a new world, a world where utter frankness contrasts with his reserve, where seemingly unemotional acceptance replaces his lacerating hurt and where wonder can be found in things he hasn't paid attention to. And then there's the sexy next door neighbor, Maggie (Carrie-Anne Moss, "The Matrix," "Disturbia"), who takes a shine to him. "Snow Cake" is the first produced screenplay of Angela Pell, who looked to her own autistic son for inspiration and if Linda's childlike behavior might be partially due to the writer's son's young age, Weaver puts it across by tempering it with tartness. But then again, many of us may be like the character of Diane, whose concern for Linda's loss is delivered all wrong. Embarrassed by Linda's rebuff, Alex tries to make amends but is advised 'It's alright. I know all about autism. I saw that film.' Alex begins to fill Vivienne's void. He takes her dog Marilyn, ill from the diet of bananas she's been fed by Linda, to the vet. He is cautious of Linda's rules ('Don't go in my kitchen!') and tries to remove the obstacles she cannot get around (taking out the garbage, dog vomit). But his eyes are also opened by Linda's stark wisdom. The woman who rarely looks someone in the eye advises that his choice of glasses makes him look shifty - and she's right. When asked what Vivienne would have wanted, she sensibly replies that her daughter would have wanted to be alive. All this openness from Linda enables Alex to slowly begin to talk to Maggie. 'I have a son who died,' he tells her, and knowing the man has spent time in jail for killing someone, we're left to slowly put his story together. The snow of the title is omnipresent, from the barren landscape of Wawa, whose town symbol is a giant, bronze goose, to the snowflakes and sparkle that fascinate Linda, whose whole world is reflected in a snow globe that contains Vivienne's picture. Linda is convinced to receive funeral goers in her home, and of course this leads her to a panic. She blocks everything out by turning up the music that she loves, and for one time only, we're taken into Linda's perspective. Evans's lone use of flashback tells us all we need to know about Linda's connection to her daughter, thoroughly internalized. A terrific soundtrack features everything from Free's "All Right Now" to the Stereophonics to Tori Amos to Super Furry Animals and the tribal world sounds Linda equates with her daughter. In fact, the music is all about Vivienne, whose presence permeates the entire film. In lesser hands, "Snow Cake" could have been sentimental sop, but Evans and his wonderful cast have created an affecting film that earns the emotions it evokes.

Alex, we learn, was convicted of murder in England but the details of that crime remain vague. Although he was blameless in Vivienne’s death, guilt forces him to go to Wawa and pay penance to her mom, Linda (Siguorney Weaver). When he arrives on her doorstep, however, a childlike creature, in adult garb, greets him, who seems interested only in the sparkly toys that Vivienne bought and Alex delivers. He soon learns that Linda is autistic but also learns that there is more to the woman than initially met his eye. Guilt-ridden, Alex agrees to stay for a few days to oversee Vivienne’s funeral arrangements. He meets Linda’s sexy neighbor, Maggie (Carrie-Anne Moss), and sparks of passion begin to fly. The two women, each in their own way, help Alex tackle his past and confront the grief that has overcome him for so long. You learn why he is a tortured, lonely soul, but I am not going to tell you what it is. Go see the movie if you are interested. The acting by the three principals is right on the money. Alan Rickman, one of our great, if underrated, actors gives a layered performance as a grieving man with a past who hopes to find some sort of redemption in, of all places, Wawa, Ontario, Canada. Sigourney Weaver has the tough balancing act as autistic Linda. She is highly functional in her autism but is obsessed with sparkly lights, a scrupulously neat kitchen and fear of taking out the garbage. Weaver keeps the balance, though, between her childlike demeanor and her understanding of what is happening around her, particularly with the death of Vivienne. I do not know if I would call it an Oscar-worthy performance but it is one that the actor does takes to the edge. Carrie-Anne Moss, who was wasted as the mother in the recent “Disturbia,” comes off a heck of a lot better here. Her vivacious Maggie is just the romantic tonic that Alex needs to save himself from himself. Moss’s performance is both assured and anchored. There is a true surprise, though, in “Snow Cake” - the all too brief appearance by Emily Hampshire as the extremely likable Vivienne. Her sudden death is not just shocking, it took the wind out of this viewer’s sails as I wanted to see more of the young actor and her character. I think she is a thesp to be reckoned with down the line. Director Marc Evans does a solid job with this independent little three hander that gets you to invest yourself in the characters and their lives. It doesn’t try to be a treatise on autism and grief but shows the former with an air of honesty and the latter as a palpable weight to bear. It helps that he has a cast that know their ropes and deliver the necessary emotion to make the characters sympathetic. What could have been a schmarmy, overly sentimental film is, instead, one of decent filmmaking and good acting.