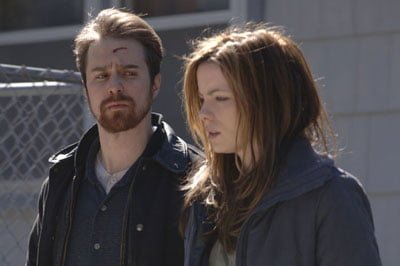 Arthur Parkinson (Michael Angarano, "Lords of Dogtown," "Sky High") is in the high school band in a small blue collar Pennsylvania town. His parents are splitting, he's got a crush on his former babysitter, Annie (Kate Beckinsale, "Underworld: Evolution," "Vacancy"), and is starting to like the new girl at school. But while Lila (Olivia Thirlby, "Juno") takes great pictures of her new surroundings, few people see the tragedy that is about to overtake them in "Snow Angels."

David Gordon Green ("Undertow") made an auspicious debut with his dreamy take on a tragedy in Southern neighborhood with 2000's "George Washington" and proved a way with actors in his relationship breakup followup, "All the Real Girls." With "Snow Angels," he combines the two, including the faults of "Real Girls," and yet for all the fine acting on display and the rootedness in his working class location, "Snow Angels" feels like a wallow in misery. Sure there are marriages that end in seemingly inexplicable violence and depressing subject matter has been the basis of many terrific indies, but this one just made me wonder what the point of it all was. Maybe it has something to do with the studious seriousness of it, the way each and every home must have a painting or a print on the wall that defines its character. Or it could have something to do with the way Annie's husband, Glenn (Sam Rockwell, "Joshua," "The Assassination of Jesse James by the Coward Robert Ford") is portrayed as such a pathetic loser, albeit one with an exceptional dog, whose religious rants are never explained as either new, born-again desperation or ingrained by family upbringing. And don't let me forget the utterly pretentious barroom 'dancing' scene where a loaded Glenn shuffles with an old black man and a stoned woman dressed like Freddie Krueger while a lit cake iced to 'The Champ' sits atop a pinball machine in the background. "Snow Angels" certainly does convey the experience of real life in other moments, though. The ChinaTown restaurant, where Annie, Arthur and Barb (Amy Sedaris, "Strangers with Candy," "I Want Someone to Eat Cheese With") all work, is owned by Oscar, a Greek(?) immigrant. It's the type of rundown place that passes for the Chinese eating experience in small towns across the country. Annie's visits to her stubborn mother, who wants to see Glenn get another chance, feel like true mother/daughter exchanges just as Annie's overworked exasperation with her toddler Tara (Gracie Hudson) alternates with warmer maternity. But then again, Annie's affair with Barb's husband Nate (Nicky Katt, "Boiler Room," "The Brave One") seems a bit inexplicable, something tawdry which Annie is not, and while the budding romance between Arthur and Lila is sweet and real, his parents, Louise (Jeanetta Arnette, "The Shipping News") and Don (Griffin Dunne, "After Hours," "Game 6") never come across as a couple with decades of history. Arnette is very natural in her role, but Dunne does not feel like a product of his environment. Character actor Tom Noonan ("Manhunter," "What Happened Was...") is on hand to spout weird dialogue as Arthur's band leader. "Snow Angels" features some genuine performances (Beckinsale, Angarano, Thirlby, Arnette) and strong sense of place, but in the end the movie feels like tragedy propped up as art with overworked art direction and misdirected male actors.