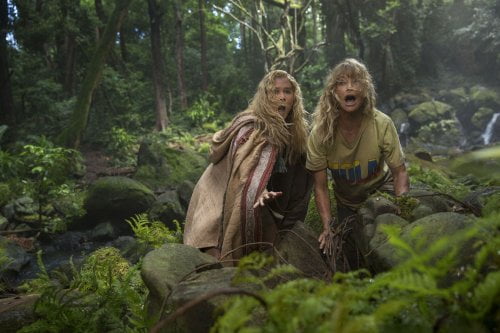 After being fired from her retail job, Emily Middleton's (Amy Schumer) up-and-coming musician boyfriend Michael (Randall Park, TV's 'Fresh Off the Boat') dumps her for her lack of ambition, groupies on his horizon. He's also left her with two nonrefundable tickets to Ecuador. Retreating to her mom Linda's (Goldie Hawn) suburban home to lick her wounds, Emily finds an old photo album revealing her mom's youthful adventurous spirit and decides to ask her to go on the trip. But mom's fears are validated after Emily succumbs to a good-looking guy at their resort bar and the two are "Snatched."

It is depressing to see talents like Goldie Hawn, in her first film in fourteen years, and director Jonathan Levine, who helmed "50/50" and "The Night Before," attached to this desperately unfunny comedy. Hawn, playing a reclusive cat lady who is mother to two arrested developments, at least comes through with her reputation intact, the film's only sympathetic character. Amy Schumer, on the other hand, appears to be appropriating the man-child personna of last decade's comedies and it's not a good look. Screenwriter Katie Dippold (2016's "Ghostbusters") has crafted something which purports to be a mother-daughter bonding comedy, but Emily Middleton is such an unlikable, self-absorbed character, that it's all but impossible to buy into. Ensconced in their Ecuadorian resort, Linda just wants to read, but Emily wants to party and manufacture selfies for the falsified life she presents on social media. She swoons when a gorgeous man named James (Tom Bateman, TV's 'Da Vinci's Demons') expresses interest, but Linda becomes suspicious when, after taking them out on a day trip, he goes off highway. Enter Morgado (Oscar Jaenada, "The Shallows"), a brutal kidnapper. There's a lot of physical comedy and the two actresses acquit themselves well, but it stretches credulity that Emily could inadvertently knock men out (she also kills a couple). Gross out gags are off-putting rather than funny, an extended sequence with a tapeworm a riff on Melissa McCarthy's teeth whitening gag in "The Boss." Bashir Salahuddin of TV's 'Late Night with Jimmy Fallon' is moderately amusing as the apathetic State Department clerk harassed into action by Emily's agoraphobic mother's boy brother Jeffrey (Ike Barinholtz, "Suicide Squad"), but both Wanda Sykes and Joan Cusack are wasted as a couple of tough cookie (Cusack's Barb is former Black Ops) vacationers who try to help. As Roger Simmons, another vacationer they find in a Columbian outpost who offers to boat them to Bogota using a place mat map, Christopher Meloni is graced with one of the film's few laughs. Last year gave us "Mother's Day," now this. What have moms done to deserve this? Grade: