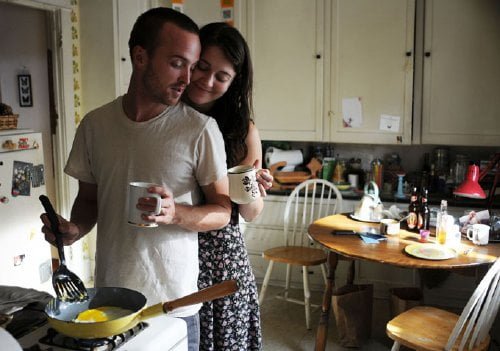 Married couple Kate (Mary Elizabeth Winstead) and Charlie (Aaron Paul) wake each day in an alcohol-induced haze from partying hardy the night before. One day, Kate goes to her job as a first grade teacher with one heck of a hangover, one so bad that she throws up in front of her class. This is just the first revelation for the young teacher that she can no longer go on getting “Smashed.”

First grade teacher Kate Hannah (Mary Elizabeth Winstead, "Scott Pilgrim vs. the World") seems happily married to her rock writer husband Charlie (Aaron Paul, AMC's 'Breaking Bad'). They live in a cozy Highland Park bungalow and enjoy going out to local clubs most nights. But when one of Kate's evenings infringes on her day in a disturbing way, she must face up to the fact that her and Charlie's relationship may seem so good because they're always "Smashed." Director James Ponsoldt ("Off the Black"), who cowrote the script with his comedian friend Susan Burke after hearing many of her stories about her own struggles with alcohol, has made a film steeped in realism that isn't heavy or inspiring as much as it is an examination of codependency that's not afraid to go to places that are raw, emotional or just plain funny. Mary Elizabeth Winstead puts herself on the map with this role, proving herself an actress of much greater depth than her genre roles have allowed. She's ably supported with a vulnerable performance from Aaron Paul and a completely new persona from 'Parks and Recreation's' Nick Offerman as awkward, nerdy vice principal Dave Davies. Offerman's wife Megan Mullally also appears in a smaller role as his and Winstead's overly solicitous boss Principal Barnes. Kate's problems are immediately apparent as she blames a weak bladder for a bed wetting incident, then swigs beer in the shower. In the school parking lot, she grabs a flask for added incentive, then teaches her class like a buzzed game show host. When her constitution catches up with her, she's horrified, vomiting into her waste basket in full view of her kids. An innocent question gives her an out which will come back over and over to haunt her. When she's sent home by a maternal Barnes, she stops to thank Dave for taking over her class. He surprises her, telling her he saw her drinking earlier, that he's been there himself and that if she wants help, he is there for her. Things get more complicated when she broaches the possibility that she has a problem with Charlie. Over a game of pool. With drinks. In the afternoon. Charlie appears supportive, but one can see his alarm and the platitudes he offers are weak. When the usual continues - Kate and Charlie meet his brother Owen (Kyle Gallner, "Jennifer's Body," "Beautiful Boy") at a small club and continue drinking - we're given evidence that Kate has stepped beyond normality. She offers help to a stranger outside, is begged for a ride from the woman and ends up smoking crack and waking up outside in an industrial park. And still, she hasn't hit bottom. What's so great about "Smashed" is that it takes a look at a familiar subject from a somewhat unfamiliar angle without turning tragic or preachy. Burke and Ponsoldt make it clear that when only one half of a couple decide to deal with addiction, the relationship cannot continue. They trace the roots of the problem (back to Kate's mom Rochelle (Mary Kay Place, HBO's 'Big Love') who used her single mother status as a crutch) and deal with the consequences, some of which are hard realities. Kate's new relationship with sponsor Jenny (Octavia Spencer, "The Help") is met with jealousy and suspicion by Charlie, used to being her one and only confidant. And then there's the weirdness with her initial one, Dave, a kind man whose attraction to Kate tumbles out in an ugly way. The writers redeem him later with a witty in joke. Kate and Charlie are often seen riding bikes, the better to avoid DUI arrests inferred, but then they construct a neat little twist here as well. Winstead is clearly committed to the role. She looks wan, her skin unhealthy, when the film begins. The actress portrays Kate as a true functioning alcoholic, one who knows her social limits until she's betrayed by her body. She's a realistic drunk, not an 'acted one (she's just buzzed enough in that opening classroom scene to raise a flag with an adult but easily get by with her kids). Playing sober, she shows compassion, empathy and frustration with both her mother and her husband and doesn't allow Kate to disappear in a well of self pity. "Smashed" is a small slice of life where we're allowed to see beyond the surface. It's honest and engaging, an American independent without a hook or a quirk or a need to be hip and that's refreshing.