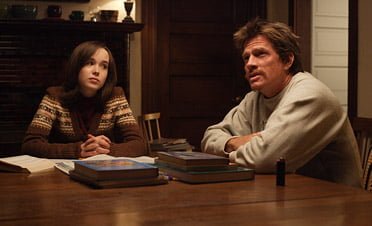 Lawrence Wetherhold (Dennis Quaid, "In Good Company," "Vantage Point") is a misanthropic widowed English professor who believes his intellect is superior to everyone else's. When he lands in the hospital after a fall that results in a seizure and loses his right to drive for six months, the event coincides with a 'win-win' visit from his adopted brother Chuck (Thomas Haden Church, "Sideways," "Spider-Man 3") who needs both a job and a place to stay. Chuck and Lawrence's doctor, Janet Hartigan (Sarah Jessica Parker, HBO's "Sex and the City," "Failure to Launch"), a former student, open new worlds to Lawrence and his chip off the old block seventeen-year-old daughter Vanessa (Ellen Page, "Juno"), both little more than "Smart People."

Thomas Haden Church and Ellen Page steal the show in this amusing comedy about the isolation of self-absorption. Quaid is terrific, yes, in his crusty role, but it is difficult to understand how such an unpleasant man could have had such a happy marriage to a beautiful blonde let alone have a student crush turn up still carrying a torch as his attendant physician. Also inexplicable is how beautiful and obviously brainy Jessica Parker's character, whom Vanessa disparagingly refers to as 'the physician,' would still be attracted to the arrogant prof who gave her a C, especially after a first date fails spectacularly. Screenwriter Mark Poirier wastes no time establishing Wetherhold's ill nature by having the guy park his less than fabulous vehicle diagonally across two parking spaces. After it's towed by campus security, Lawrence climbs a chain link fence to retrieve his briefcase rather than play by the rules outlined by the lot attendant, the third student he has failed to recognize that day. Brother Chuck, his adoptive status always present in any introduction, has visited earlier in the day only to be immediately shut down for a loan he hadn't asked for (yet). That Vanessa is Lawrence's pride and joy is evident when Dr. Hartigan must call the house three times before not being hung up on as a telemarketer, then is made to convince the girl she should break away from her studying to visit dad. Where Lawrence is consumed with having his unreadable book on criticism published and being made head of the English Department, Vanessa is obsessed with achieving perfect SAT scores when she's not meeting with the Young Republicans, model UN or National Honor Society. Chuck, the epitome of slackerdom, correctly comes to the conclusion that his brother and niece need some lightening up, and so he gets Vanessa to smoke some pot ('I'm in an after school special,' she declares when he lights up). To nudge Lawrence towards a fresh start, the duo take his wife's old clothes to the local Goodwill (Lawrence buys them all back). Things cross a line, however, when Chuck takes Vanessa out to celebrate college acceptance and she comes onto him, mistaking his good intentions. There is a second child in the Wetherhold household, college aged James (Ashton Holmes, "A History of Violence," "Wind Chill"), surprisingly normal, who provides a dorm spot for Chuck to hole up in. I was afraid Page was going to give us more Juno, but here she's covering her insecurities not only with snappy sarcasm but touching social retardation as well. When she's not with her smarty pants clubs, her only communal recourse is her family, so she takes on the mantle of housekeeper to feel a sense of belonging. Smart writing well played by Page. Haden Church is hilarious as low achieving Chuck who doesn't get a pass for his lesser educational status here. He is the most emotionally sound of the bunch though, and a funny, natural caregiver and familial commentator. Quaid gives a real physical performance, hunching his head between his shoulders, his walk a series of forward lurches, as if he's calcifying himself with his outlook on life. His metamorphosis in Hartigan's hands is ever so gradual and Quaid makes it sympathetically humbling as well. Jessica Parker makes her character as believable as the script will allow, although one wonders if Hartigan wears chic duds and heels at the hospital on the page. Holmes is fine, but his character's lack of self-absorption relegates him mostly to the background when not involved in sibling squabbling. The film is set in the same Pittsburgh academic neighborhood used in "Wonder Boys" - in fact, it seemed so familiar (English professor/author undergoing romantic/parental trauma, a Holmes in the cast!) it might as well have been the same house. It does have the believable feel of a long-lived in house. Hartigan's digs, however, have the impersonality of a hotel room which does not reflect her character no matter how empty her life might be. The film's score consists of folky guitar strumming, which, while not adding anything to the mix at least does not distract.