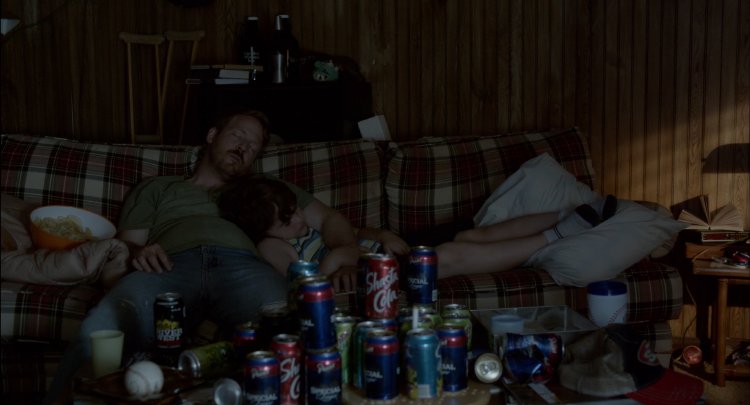 Wayne Stobierski (David Sullivan, "Primer," "Argo") is an alcoholic who cracks open a beer even before he signs off on his part time mechanic job for the day and gets so roaring drunk during the evenings he’s never on time for anything, including picking up his son, Tyler (Cooper J. Friedman, "Battle of the Sexes"), from his ex Deidra (Tanya Fischer).  But Wayne’s about to have a come-to-Jesus moment when he finds out from Tyler’s stepdad Stu (David Sapiro) that they’ve filed a custody suit against him in order to move the family to Phoenix from “Small Town Wisconsin.”

Debuting screenwriter Jason Naczek has concocted a manchild redemption story using metaphors as heavy as a hammer and a fairy godmother who makes everything alright with a seeming flip of the switch.  Director Niels Mueller ("The Assassination of Richard Nixon") keeps the film running like a well oiled machine, but the best things about it are Bill Heck’s ("I'm Your Woman," "The Ballad of Buster Scruggs") compassionate best buddy Chuck and its Milwaukee locations.

Wayne is what is classically known as a f&*%-up, his alcoholism only part of his problem (we’re given no idea why he drinks or even if he was ever actually married to Diedre, let alone whether that was the cause of their separation).  In the film’s first blatant metaphor, we see his goldfish Buster – or make that barely see him as the man fighting for custody of his son can’t even take care of a fish (Buster doesn’t survive the film’s first act).  The only thing Wayne, who lives in a trailer overflowing with empties, has going for him is his genuine love for his son (and that best buddy, who he doesn’t deserve).  After a day spent fishing, repairing cabinetry in a foreclosed house accessed through a hole in a fence and starting a grease fire in his own kitchen, though, we observe Wayne’s anger management issues which he struggles to control even with Tyler (he’s like ‘Breeders’’ Simon Pegg with a slightly better grip on himself).  And after promising to return Tyler to Deidre by 10 a.m., there stands the panicked woman beating on his door an hour past her deadline.  Judge Haupt (Lily Knight) kindly, but firmly lowers the boom, granting full custody to the boy’s mother.

What follows is a road trip, Wayne determined to make his last days with Tyler special by selling his baseball card collection to buy tickets to a game in Milwaukee.  He lies to Diedre, substituting a story about camping, and wears her down, but she sets conditions – Wayne must tell Tyler about their move and take his more responsible friend Chuck as a chaperone.  He lies to Chuck, too, presenting the invite as nothing other than the desire to have his best friend along, an invite Chuck finds easy to accept after returning home to find his SO Lorraine (Andi Matusiak) in bed with another man.  Chuck will have his work cut out for him, but arriving at Chuck’s sister Alicia’s (Kristen Johnston, TV's 'Mom') with her passed out brother will be the best thing that happens to either of them.

Sullivan sells his character, but cannot sell his miraculous turnaround, which happens far too abruptly given what we’ve observed.  Johnston is an appealing presence, but her character is as saintly as Wayne’s is irredeemable.  Friedman is spot on, a regular kid confused by his dad’s mixed messages.  There is something here, but Naczek’s heavy handed screenplay is full of cliché and moves so bone-headed we cannot suspend disbelief.  At least “Small Town Wisconsin” has tipped me off on where to get the best bratwurst in Milwaukee.