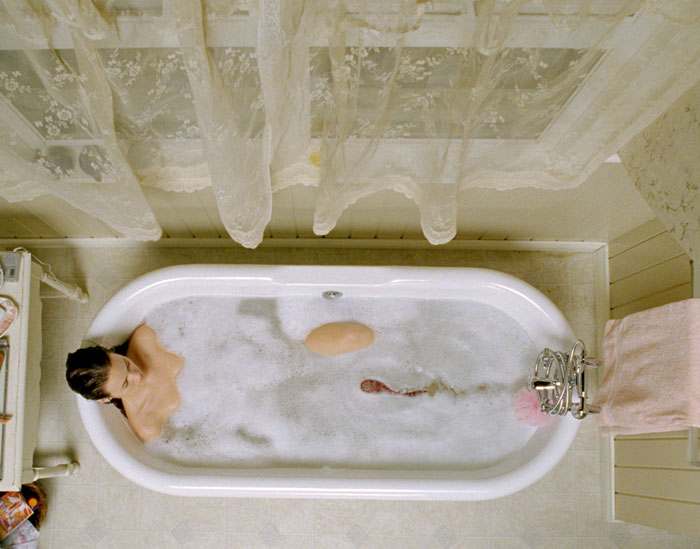 It's rumored in the town of Wheelsy that the young and beautiful Starla Grant (Elizabeth Banks, "Seabiscuit," "The Baxter") married her older, rich husband for the security he could offer and our first glimpse into the marriage doesn't belie that fact. Rejected from making love to his wife, Grant Grant (Michael Rooker, "Henry: Portrait of a Serial Killer") leaves in a huff and parks himself at the local watering hole. A chance meeting with Brenda Gutierrez (Brenda James, "The Sisterhood of the Traveling Pants") leads to some extramarital hanky panky out in the woods, but it leads to something else too - an alien pod whose inhabitant infects Grant in the horror comedy "Slither."

And "Slither" is a lot more fun that most of these genre fusions due to its engaging cast and writer/director James Gunn's ("Tromeo and Juliet") mirthful embrace of the flicks he grew up on. From its opening shot of a brain-shaped meteor hurtling towards the earth as two urban cops park by a roadside billboard, we now we're in familiar territory, but Gunn mixes up his frothy fun in some new configurations and caps it off with gleefully gratuitous gross outs. One of those cops is newly promoted Sheriff Bill Pardy (Nathan Fillion, "Serenity"), who has long held a torch for Starla, so he's primed and alert when strange things begin happening at the Grant household. Guilty and remorseful, Starla makes up with Grant but is startled by the wound on his chest that he brushes off as an insect bite. Soon, though, his skin begins to bubble and there's a lock on the basement door that wasn't there before. Grant is clearly being torn between his own instincts and the alien inside, but he overcomes the urge to attack Starla and pays Brenda a visit instead. The woman's reported missing and the increasingly suspicious Starla breaks her way into the basement. She's freaked by what she finds and her shrieks call the mutating Grant who tries to silence her only to be stopped by the startled Pardy and his posse. Following Grant, who now looks somewhat like a squid, the group finds a bloated Brenda who gives birth to thousands of slithery pink things which waste no time infecting the entire town. Gunn's goofy tale mashes together such classics as "The Night of the Living Dead" with "I Married a Monster from Outer Space," "The Blob" and David Cronenberg's "Shivers." There's a foul-mouthed Mayor (Gregg Henry, "Ballistic: Ecks vs. Sever") in "Jaws" classic denial (he tries to pass off the mutations as lyme disease) and a family called the Cassavetes (the witches of "Rosemary's Baby"). Alien behavior merges the style stomach entry and acidic spit of "Alien" with "The Hidden's" disgusting mouth entry habit. But Gunn does more than just pour on the references. He's cannily crafted the film as a nightmare of man's thwarted sexual desire run amok and balances his humor with some real suspense. Effects work features some new twists on recent classics seen in such films as the "Final Destination" franchise. "Slither" ultimately oozes out of control in its gooey climax before tepidly trailing off, but even then Gunn lobs one hugely funny sexual metaphor our way and Nathan Fillion's got the comic timing to punch the joke. "Slither" is a surprisingly entertaining package.