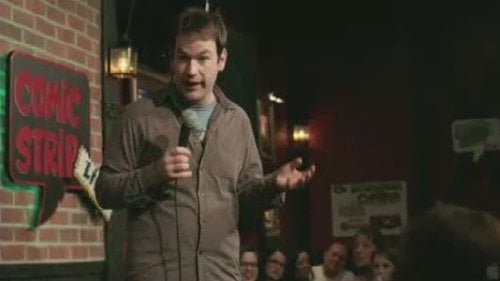 Matt Pandamiglio (Mike Birbiglia) is an aspiring comedian who does not yet know how to tell a joke. He has commitment issues with his 8-year-long girlfriend Abby (Lauren Ambrose) and, because of these stresses, has a increasingly frequent sleep disorder. Matt tells his story, asking us to “Sleepwalk with Me.”

When we first meet Matt Pandamiglio (cowriter/codirector Mike Birbiglia), he is anxious about moving in with his girlfriend. Of eight years. All his friends and family, including his parents, love Abbey (Lauren Ambrose), and that's part of the problem. He's afraid she may be the best thing about him. He envisions himself as a standup comic, but he's really a bartender at a comedy club whose boss throws him the odd couple of minute fill-in spots. He has the kind of bumbling stage presence that could be turned into an asset, except that he hasn't. The stress is escaping in increasingly weird nighttime episodes and the fact that his physician dad is pressuring him to see a sleep specialist is just added weight on his shoulders in "Sleepwalk with Me." Standup comic Birbiglia does that kind of gentle observational comedy that we chuckle with as we relate to rather than guffaw at and his autobiographical feature debut plays much the same way. Not so much an out-and-out comedy as the honing of a standup routine, "Sleepwalk with Me" is a genuine portrait of a not-quite-so-young man finding his way in the world but stepping off the unexpected path. From the get-go, we're left wondering just what the independent Abbey sees in the directionless Matt, which is a drag on the film's opening momentum, but once he gets rolling, Birbiglia shows just how tough the stand up racket is and just how dedicated to the dream one must be to make it. The sleepwalking incidents build in extremity over the course of the film, with a jump through a motel window a metaphor for the literal break he must make. The film may not be as laugh out loud funny as one would expect from a guy who makes his living telling jokes, but Mike Birbiglia has made an insightful film on how he got there. The film also features Carol Kane and James Rebhorn as mom and dad, Alex Karpovsky and a priceless Sondra James as Matt's manipulative agent Colleen.

Multi-hyphenate (star-co-director-co-writer) Mike Birbiglia uses his own life story that shows the evolution of a stand-up comic while coping with a straining relationship. Matt is perfectly content to continue his long time boyfriend-girlfriend, unmarried life with Abby. She, though, has other plans and wants a commitment to marriage. Meanwhile, Matt really wants to be a comedian, not a bartender in a comedy club, and finally his boss lets him take the stage. It is a less than auspicious debut, despite Abby and their friends cheering him on. Matt gets his big chance (for him) to actually get a gig and he gladly hits the road to perform in a tiny club far away from his NYC. His laughs are few but he manages to get another stand-up job and some sage advice from a pro. Matt begins to use his troubles with Abby, the stress and strains of his relationship and his experiences with his sleepwalking in his act. As the film progresses, Matt’s comedy improves and he spends his life on the road and has trouble balancing his new-found career and his time with Abby. “Sleepwalk with Me” is a very personal story from actor-turned-filmmaker Birbiglia and gives an honest account of Matt’s two very different lives – with Abby and with his professional ambitions. With the help of fellow stand-up comics he shows life on the road and the trials of being a comedian – the long hours, lousy food, doing an act at 9 different colleges in 7 days. It is not an attractive lifestyle but the film shows the hard knocks comedians go through to ply their chosen trade.