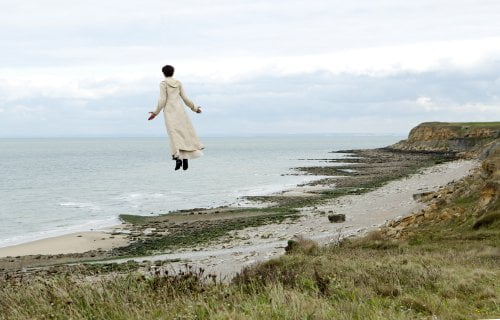 The arrival of the rich and eccentric Van Peteghem family is viewed with disdain by the mussel gathering Bruforts who complain of their exhaust fumes while they themselves are deemed picturesque. The rich vacationers and poor locals will collide when Inspector Machin (Didier Desprès) begins investigating disappearances and Ma Loute Brufort (Brandon Lavieville) falls for the gender-bending Billie Van Peteghem (Raph) on "Slack Bay."

Although he veered into comedy with his ""Li'l Quinquin," this is the first time writer/director Bruno Dumont ("Humanité," "Camille Claudel 1915") has purposefully set out to make one. "Slack Bay" has a lot in common with his mini-series in its Opal Coast location, an odd looking young man (Ma Loute), grisly killings, a bumbling police detective and unexpected flights, but this time Dumont's film has a Monty Python meets Luis Buñuel vibe. The 1910 set film over relies on repetitive slapstick and sound effect gags, but its game cast, particularly the almost unrecognizable Fabrice Luchini ("In the House") as Van Peteghem patriarch André and Juliette Binoche as his sister Aude, are delightfully absurd. Dumont's jumping off point was old postcards depicting locals ferrying tourists across Slack River, a repeating motif here with Brufort (Thierry Lavieville) and son waiting near a rowboat only to pick up passengers in their arms and wade across (they will take out their boat for those they will 'disappear'). The Bruforts are literally living off the tourist trade, their matriarch (Caroline Carbonnier) asking her brood 'Who wants more foot?' while nonchalantly waving a bloody one about. Meanwhile the inbred Van Peteghems are opening up their clifftop Egyptian-inspired manse Typhonium, André marveling at everything he sees while his wife Isabelle's (Valeria Bruni Tedeschi, "Human Capital") attempts to feather dust a chandelier keep landing her in a heap. Machin, so obese his every footstep is heard, puffs his way up, his right hand Malfoy (Cyril Rigaux) the Laurel to his Hardy. The Van Peteghems, whose name Machin never quite masters, are alarmed at his report, but convince themselves they are safe as they come from Tourcoing. Meanwhile Aude's son Billie has entranced Ma Loute dressed as a girl, Ma Loute ending up at the Van Peteghem dinner table after the two are rescued out at sea. The Van Peteghems become increasingly more absurd with André's inept sand yachting, Aude's embrace of a local religious procession and cousin Christian's (Jean-Luc Vincent, "Camille Claudel 1915") utter confusion. Machin spends more time investigating a lost parasol than progressing on his murder case. And as if to underscore the groundedness of those who eat feet, first Isabelle, then Machin float into the sky. A grimmer note is struck when Ma Loute realizes the truth about Billie, just as Quinquin bullied an Arab, but Dumont's harsher realities are fewer than his sillier ones, Luchini and Binoche's discussion on Billie's incestuous parentage delivered with the beats of a 'Who's on first?' routine. Grade: