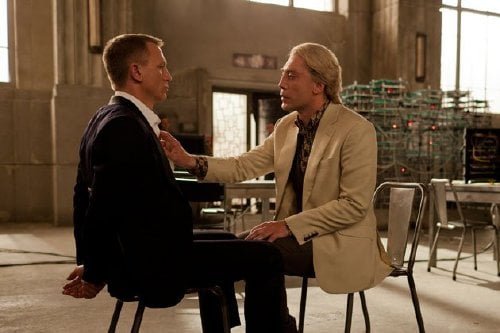 M (Judi Dench) is desperate to retrieve the hard drive which lists all the members of NATO undercover with global terrorist groups and she's even willing to sacrifice her favorite agent, James Bond (Daniel Craig), to get it. Believed dead, he returns in rough shape yet is allowed back into the field to find the man so determined to take M down that he will do battle all the way to "Skyfall."

Who would have thought that Sam Mendes, the director of such marital dramas as "American Beauty" and "Revolutionary Road," would turn out the best Bond yet, at least the best since the series' early days? With a script by Neal Purvis & Robert Wade ("Casino Royale") and John Logan ("Rango," "Hugo") that celebrates Bond's 50th anniversary by going both back into the lore and making breaks with it, "Skyfall" will entertain both hardcore and casual Bond fans. It's also give the sheen of true quality with the most uniquely gorgeous cinematography of any Bond film from Roger Deakins ("True Grit") who surely must be recognized for his work here. After a lengthy opening sequence that finds Bond racing over the streets and rooftops of Istanbul before hand to hand combat on top of a speeding train, we settle into a stunner of an opening credit sequence set to Adele's lush theme song, a perfect example of the new saluting days' past. Bond is living the life with a lovely local as M writes his obituary, but when MI6 headquarters are bombed, Bond's loyalties cannot be overcome. After a dryly unsentimental welcome from M, Bond is taken to the 'new' MI6 offices in Churchill's old bunker where he fails field requirement tests that he's told he's passed. He's gobsmacked meeting the new Q (Ben Whishaw, "Bright Star," "Cloud Atlas"), a fresh-faced computer geek who offers him only a Walther and radio tracker. Meanwhile, M receives communication that the first three names on her list have been released along with videoed executions and a mysterious message about paying for her sins. Bond's Istanbul attacker is identified and located in Shanghai. Patrice (Noomi's ex, Ola Rapace) provides no information, but he leaves behind a very special poker chip from a gambling establishment in Macau which leads bond to Sévérine (French television actress Bérénice Marlohe, beautiful but perhaps not as poignant as intended) who will take him to the man she fears like no other. A blond Javier Bardem ("No Country for Old Men") is Silva, a former MI6 agent feeling betrayed by 'the old woman' (M's maternal pull can be seen as a direct link to England's Queen) and he's a blast here, all quiet high wheedling and erotic innuendo. He has a strong link to Bond through M, but the two blonds are night and day. A game of cat and mouse ensues with Q as a central pivot as M is brought before Clair Dowar MP (Helen McCrory, "Hugo") not only to account for her recent mess but to defend the legitimacy of the entire organization in a modern world.. The script keeps pounding the concept of old ways being best in a computerized world dealing with urban terror and under Mendes "Skyfall" has its cake and eats it too. The old Aston Martin DB5 returns (complete with quip about ejector seat) and Bond's martini is clearly shaken in the background as he gives his classic introduction to Sévérine. There's hand-to-hand combat and knives in play as computers are coded to leave complex trails and explosions rock downtown London. In one doozy of a scene, Bond uses fire extinguishers as cover to save a roomful of people from gunfire. The film has players both old (the obvious, beautifully articulated chemistry between Craig and Dench; Rory Kinnear's notable right-hand Tanner) and new, many of whom should be sticking around. Ralph Fiennes is Gareth Mallory, a potential government obstacle for M and Bond, who labels him a 'bureaucrat,' only to eat his words, a possibility suggested by Eve (Naomie Harris, "Pirates of the Caribbean: At World's End"), the beautiful agent confined to a desk job after her harrowing experience in Turkey. Harris is flirty fun, especially giving a whole new meaning to the phrase 'close shave.' And for the first time, we get hints of Bond's early days which include Kincade (Albert Finney), an old school gamekeeper. Deakins' photography isn't only stunning, using glass and neon and darkness magically in one scene and silhouettes created by sunshine in another, it's effective at plunging us into the action, often to the point of vertigo. Composer Thomas Newman, a newcomer to the Bond series (but a Mendes veteran), punctuates his effective, exotic action score with familiar Bond themes. Production design and art direction provide those Shanghai towers, rooftop swimming pools, and dragon dotted canals and include dramatic locations like the Scottish Highlands' Glencoe and a London both old and new. Special effects makeup for one character is brilliantly ghoulish. "Skyfall" is the first Bond film in the 22 years I've been reviewing movies that very well may end up on a year end top 10 list. It's a modern twist on a classic series and just when you might be wondering about yet another iconic Bond element - bingo, the filmmakers deliver with an ending that leaves you wanting more.