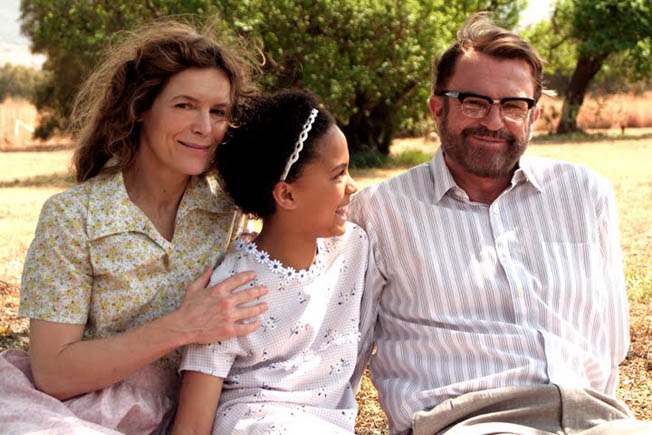 Set in the midst of the battle of apartheid in South Africa, Afrikaner couple Abraham and Sannie Laing are blessed with a baby girl. The blessing is tainted, though. The baby born to the white couple is of considerably darker hue than her parents, beginning a life-long struggle over the color of her “Skin.”

'Too Late for Sandra Laing' blaze post-Apartheid headlines as a shy woman (Sophie Okonedo, "Dirty Pretty Things," "Hotel Rwanda") ducks attention from both friends and the media. Cowriter (with Jessie Keyt and Helena Kriel ("Kama Sutra")/director Anthony Fabian tells the incredible true story of a black woman born to white Afrikaner parents in South Africa who grew up being classified and reclassified by both the Government and her other father based upon nothing but "Skin." When young Sandra (Ella Ramangwane) Laing is enrolled in school by her loving mother Sannie (Alice Krige, "Reign of Fire," "Silent Hill"), the teachers and students are astonished to see a little girl who is clearly black being admitted into their midst. It is the 1950's in the land of Apartheid and Sandra herself is confused when confronted, having been brought up with no question as to her racial heritage, she perplexedly replies 'I'm not black,' when accused of being otherwise. Sandra's parents run a store for the local black populace off the beaten track. Fabian deepens an already odd conflict when we witness Sannie treating her customers in a friendly manner and being told off by her husband, Abraham (Sam Neill, "Daybreakers"), for doing so. Furthermore, when a female customer holds payment out in her hand, he pounds the counter with his forefinger - there will be no physical contact with a 'Kaffa.' And yet, when Sandra is reclassified as black and expelled from the school where her older brother Leon (Hannes Brummer) attends, Abraham takes their case to the local classification board insisting on her white lineage. As if the unwarranted canings from teachers were not enough, now Sandra must endure racial stereotyping one would have hoped vanished with the Third Reich (when a Laing advocate explains that almost all Afrikaners have black blood in their backgrounds, one can feel the uncomfortable shifting throughout the room). The Laings prevail and Sandra is white again! But not as white as the blond toy doll her mother tucks her in with at night. Abraham's attempts to have his older daughter (Okonedo) settled down with a good Afrikaner backfire and she cannot resist her natural response to vegetable seller Petrus Zwane (Tony Kgoroge, "Invictus"). When his daughter chooses a black man, her father disowns her and the family rift lasts for generations. Worse, Petrus turns out to be abusive and Sandra finds herself living in abject poverty with two small children. This is an amazing story, well acted, but frankly it loses something when the focus shifts from the ten-year-old Sandra (Ramangwane is a natural, expressive actress) to the Oscar-nominated Okonedo. Once the absurdity of the situation has been accepted, the film plays out like a made for television docu drama, with Sandra constantly challenged and overcoming and, whereas Ramangwane gets to play the eye of an absurd storm, Okonedo enters the picture more as a victim. It doesn't help that Kgoroge seems to switch from charmer to devil overnight. Neill and Krige are excellent as the divided parents. Neill is such an adamant champion of his daughter's rights, it is shocking when we learn he is a bigot. Krige is all maternal warmth and concern holding clearly liberal views, but is torn between husband and daughter (this last is unexplained as Sannie clearly has a very different viewpoint from her husband, yet objects to Petrus as well). Even though Fabian's film loses a lot of its fascination in its second half, the director manages to maintain interest through the sheer onslaught of trial and tribulation facing his heroine. The film up ticks again near its end when the central focus of Sandra's racial typing returns. "Skin" is well worth seeing as an entirely different aspect of Apartheid than has been seen before.

Based on a true story, writer/director Anthony Fabian makes his feature film debut with a unique story of reversed racism where the child of a white South African couple is ostracized by the white society to which they belong. The tale begins with 10-year old Sandra’s (Ella Ramangwane) enrollment in a private school for whites only. Although her father has the official documentation that Sandra is, indeed, white, the teachers, students and their parents treat her as an outcast forced upon them. This begins Sandra’s and her parents’ battle to have the girl accepted as a white equal in the minority-ruled country. However, the color of Sandra’s skin also causes her identification with the black majority held under the thumb of apartheid rule. This does not sit well with her parents, especially her bigoted father, Abraham. The inner turmoil between being white and black is the real setting for “Skin” and Sophie Okonedo does a fine job in giving Sandra depth and dimension. This a well-made, well-acted film that is more suited for airing on a premium television outlet like HBO. This would be a good thing as the exposure it would get would be far greater than “Skin” will have at the theaters. This earnestly told, serious parable about racism is gripping in its twists and turns as Sandra wrestles with a duality that keeps her from being a part of the world into which she was born.