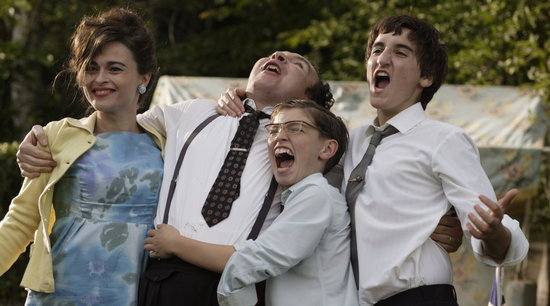 It is the summer of 1966 and 12-year old Bernie Rubens (Gregg Sulkin) is anticipating the biggest day of his life ­ the day of his Bar Mitzvah when he will become a man. It is also the year that, for the first time, England may have a shot at the World Cup. As Bernie’s big day and the final game draw near (both events are scheduled for 31 July), the boy fears the worst: England will make the finals and Bernie’s meticulous plans will fall apart in “Sixty Six.”

'That's the thing about being Jewish. You don't have a foreskin, so you gotta have a lot of balls.' 12-year-old Bernie Reubens (Gregg Sulkin) doesn't get much attention. He's the last picked for sports at school (after the kid with polio!) and his mother's attention is diverted by his unruly older brother Alvie (Ben Newton) and his meek, anxious father. When blind Rabbi Linov (Richard Katz, "Enigma") tells his group of boys that their upcoming Bar Mitzvahs will be the greatest day of their lives, an epic 2 day celebration where they will be the center of attention and showered with gifts, Bernie begins party planning in earnest, but the best laid plans are no match for fate and Bernie suffers a streak of bad luck capped when his big day lands on the same date as the World Cup Finals of "Sixty Six." Working with executive producer Richard "Four Weddings and a Funeral" Curtis, writers Bridget O'Connor and Peter Straughan have built a unique family comedy based on director Paul Weiland's ("Mr. Bean," "Made of Honor") real life experience - having his North London Bar Mitzvah upstaged by England's playing in the 1966 World Cup Finals. This is one tough love comedy and you're unlikely to forget poor Bernie Reubens nor his hapless dad Manny (Eddie Marsan, "Vera Drake," "Hancock") and loving mother Esther(the amazingly diverse Helena Bonham Carter, "Sweeney Todd," as capable as British period aristocrat, singing Cockney or Jewish mother) anytime soon. "Sixty Six" would make a great double bill with Brazil's "The Year My Parents Went on Vacation," another film where a world cup match becomes a huge event for a young boy yearning for his folks. In a family background opening credit sequence as hilarious as anything since "Amelie's," we learn that Bernie is a hard luck kid whose father is so meticulous he eats in his underwear to avoid spills, never drives faster than 25 mph, is deathly afraid of dogs and the tax man and is completely overshadowed by his gregarious younger brother Jimmy (Peter Serafinowicz, "Shaun of the Dead"). On the optimistic road towards his day in the sun, Bernie writes singer Frankie Vaughn, checking in as fan club member #842, for entertainment and engages Kimmel Kosher Katering (KKK!) for a sit down dinner for 250. Flashbacks to home movies of brother Alvie's party assume the same venue while also giving more proof of Bernie's familial tendency to get shuffled to the background. A family wedding in the same hall sees Uncle Jimmy entertaining all with his never ending stream of jokes. Rabbi Linov begs humor of Manny's toast, but the man is only capable of relating a string of deaths and disabilities that have struck friends and family, making Bernie wince at the thought of his upcoming fest. He actually hyperventilates and comes to the attention of Dr. Barrie (Stephen Rea, "V for Vendetta," "Stuck"), who diagnoses asthma but suspects something more. Family finances take a hit, though, when the Reuben brothers grocery is challenged by the new First Fair supermarket up the street. 'Avocados - we're done for' pronounces Jimmy as the brothers survey the competition. Bernie must begin a series of cutting back, which he begins with bravado, writing to the infamous Kray Brothers to provide a pair of heavies to keep the disappointed uninvited from crashing his event. Things get more dire though, when a fire sparked by a celebratory soccer rocket burns the family home, including Manny's emergency cash stash in the attic. "Sixty Six" is so unrelenting on the misery it piles upon poor Bernie Reubens you may just feel guilty laughing so it's a relief to know that cliched triumphant moment is coming. The fine balancing of an incredible cast helps too - there is a warmth and humanity always easing the torturous events that befall this kid. When Esther encourages Manny to have a first ever father-son day in order to break the news that his party will now be a home affair, Eddie Marsan radiates panic. How to do this? It's a flop, of course, advertised to the entire neighborhood when the dog that drags down their kite remains threateningly affixed to the hood of their returning car. Esther encourages Bernie with the news that his Aunt Lila (Catherine Tate, "Starter for 10") will now be catering their affair and all we remember is how her macaroons fall to the table with a thud. Even the well-meaning Rabbi inadvertently causes misery when his seeing eye dog's poop gets tracked onto Manny's prized living room carpet. The film's only failing is the vague definition of the relationship that develops between Bernie and the doctor. It's the family that makes "Sixty Six" tick.

Bernie’s problems do not end with the threat of England making the Cup finals. His dad, Manny (Eddie Marsden), owner of a small grocery store with his brother Jimmy (Peter Serafinowicz), gets bad news: a supermarket chain is to open right across the street. To make matters worse, his nasty older brother Alvie (Ben Newton) has always taken his parents’ attention away from Bernie. Plus, a freak accident fire destroys his home, including Manny’s hidden nest egg. It is up to Bernie, and Bernie alone, to make all the plans for his big day. Director Paul Weiland creates a charming coming-of-age period piece about the trials and tribulations one young boy must face in his quest to “become a man.” You feel for Bernie as the youngster who, against tremendous odds, must plan his big day. As the weeks pass and the day of his Bar Mitzvah draws near, England is steadily moving up the ranks of the World Cup contenders. Bernie’s worst nightmare is realized and his grand plans rapidly disintegrate. Sulkin gives a pro perf and garners your sympathy as the unfortunate youngster. Eddie Marsden is perfect as the sad sack dad whose best intensions, literally, go up in smoke. Helena Bonham Carter, as Bernie’s mom, is the anchor that holds things together for the family even through their worst times. The two actors really capture the feel of a working class Brit couple in the 1960’s. This feeling is reinforced by the attention to period details, like locale, costume and cars. “Sixty Six” is a good companion piece to a Brazilian coming-of-ager, The Year My Parents Went Away On Vacation,” another film that uses the Cup games as a backdrop.