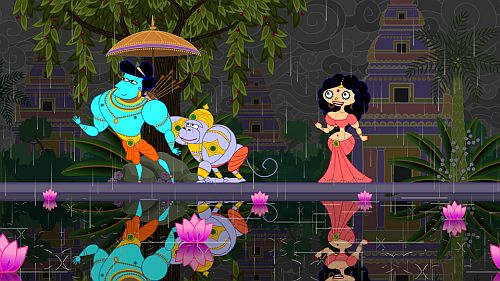 When animator Nina Paley's relationship broke up after her SO Dave decided he wanted to stay in India and didn't want her to stay with him, she found parallels to her story in Valmiki's epic "Ramayana," where a virtuous wife suffers greatly while remaining loyal to her man. Paley doesn't simply just animate this tale, though, but attacks it on four levels - her own story, the traditionally illustrated story, an argument among a Greek chorus of Indonesian shadow puppets who shine different interpretations on it and Paley's Betty Boopish rendering of her heroine for musical numbers where "Sita Sings the Blues."

This independent film, which Paley has made available for free streaming on the Internet, has had a tough road to its DVD release, but this is one disk worth buying, not only to support the filmmaker but for the sheer joy of watching it on a screen bigger than a computer monitor. "Sita Sings the Blues" is cheeky, inventive, funny, and tragic and besides, where else would an animated heroine sing "Who's That Knockin' At My Door?" (voiced by 1920's jazz vocalist Anne Hanshaw, as are all of the old jazz standards) as a bloody battle is waged all around her? After a trippy opening with brightly colored Indian figures as animated by Paley to Todd Michaelsen's "Sita in Space" (complete with anatomical hearts that thump along to the drum beat), the thoroughly entertaining Indonesian trio begin to introduce us to the story by arguing about when it took place (the 14th century? B.C.?) and the varying names of its principal characters. This continues throughout, but, in short, Sita was married to Rama who was banned for fourteen years to the forest by his father the King's jealous wife who wished her own son to attain the crown. Sita followed Rama but was kidnapped by Ravana, the evil King of Lanka. Rama eventually saves her but is disturbed that she lived in another man's house even though she remained loyal to him. When Rama's people begin to gossip about this Rama banishes her back to the forest, pregnant with his child. Paley's varying animations are all elaborate drawings, simply animated (she used Flash). Traditional Indian illustrations are used a la Terry Gilliam's Monty Python bits to tell the story. Paley's own drawings are used for the musical numbers and her Sita is a buxom number devised mostly of circles. The shadow puppets are overlays to the action. Nina and Dave's story is drawn in the simplest of modern cartoon - dots for eyes, curved lines for noses and mouths - often with still photograph backdrops (and cats! Lexi and later Bruno). And as if the Bollywood references are not obvious enough, Paley adds a 2 min. 45 sec. Intermission to her 82 minute film! (Don't worry, entertainment is provided throughout.) Romantic breakups have provided inspiration to artists through the ages, but never have lemons been made into such a sparkling lemonade as Paley's done here. Her use of Annette Hanshaw recordings, each of which ends with her twinkling shrug of 'that's all,' is inspired (the film also includes "What Wouldn't I Do for That Man," "If You Want the Rainbow, You Must Have the Rain" and "Am I Blue?"), but the film includes Indian fusion numbers from the "Chill Aum" album as well as original music written by Michaelsen, Tchaikovsky's 'Romeo and Juliet' and the ironic "Rama's Great" with lyrics by Paley herself. "Sita Sings the Blues" is simply delightful. The DVD: Is not letterboxed, although the original film's aspect ratio is 1:85:1. Subtitles are available as is a director's commentary track. Paley's 2002 short, "Fetch," is in a similar style to her Nina and Dave segment of "Sita," and plays with dimension and perspective as a man throws a ball to his dog. An interview with Paley which was done for Channel 13 in New York, presumably a public access channel which aired her film, is quite engrossing. Paley gets into the Byzantine copyright laws which "Sita" became mire in and if that sounds dry, believe me, it's not. Many, many subtitle options are available, including LOL ('I Can Has Cheezburger' speak)! The DVD is available for purchase at http://www.indiepixfilms.com.

Based on the epic Indian legend, The Ramayana, first time feature animation director Nina Paley combines myth, monsters, heroes and villains and a beautiful babe belting out the dazzling 1920’s torch songs by Annette Hanshaw in the entertaining and colorful DVD release of “Sita Sings the Blues.” Whether you are familiar with the Ramayana or not, “Sita Sings the Blues” is a must see for anyone who likes great early jazz music – brilliant in showcasing 1920’s chanteuse Annette Hanshaw’s great singing – Indian music, colorful and imaginative animation and solid storytelling. First time animated feature director Nina Paley creates a dazzling musical while coherently telling the legend so anyone can understand. It does not hurt that it has heroes, demons, evil spirits, warrior monkeys and a multi-headed tyrant. Paley adapts the original 1922 story, The Ramayana, by Valmiki and, wearing many hats, produces a work that is fun, entertaining, educational, colorful and imaginative – all on what must be a shoestring budget. The DVD features - besides the wonderful film – a director’s commentary, the theatrical trailer, an interview plus a bonus short by Paley, “Fetch.” This is a rare case that the extras are not the draw to the DVD but the movie.