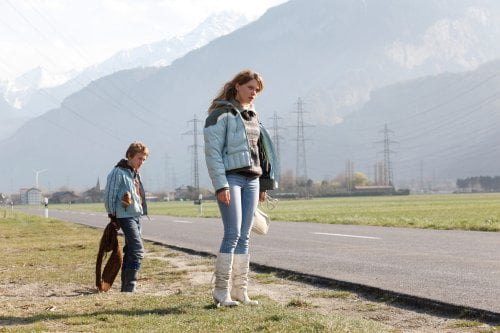 Simon (Kacey Mottet Klein) is only 12-years old but he is the man of his tiny family with his sister Louise (Lea Seydoux). They live near an affluent ski resort and Simon makes a living stealing expensive equipment from the wealthy and fencing it to the resort’s workers. He takes too many risks, though, and his luck will run out as he steals to take care of his “Sister.”

12 year-old Simon (Kacey Mottet Klein, "Home") is a real operator. During ski season, he travels daily from his tower apartment via cable car to the pricey Swiss resort which looms above. The slender kid in stolen ski-wear moves about unnoticed, stealing food from people's backpacks, and, more importantly, expensive equipment which he stashes in various hiding spots before transporting it back home on a sled where he'll sell it at steeply reduced prices to the locals. Simon can take care of himself, but has trouble with the adult in his home. She drifts from one paying job to the next, is promiscuous and squanders his hard earned cash on booze and cigarettes. Louise (Léa Seydoux, "La belle personne") is all he has, she's his "Sister." With her first feature film, 2008's "Home," cowriter (with Gilles Taurand and Antoine Jaccoud)/director Ursula Meier tackled a strange family whose lives were severed by the highway that separated their home from the rest of the world. In her new film, she has another atypical family whose youngest member is separated from what he wants by a mountain. "Home" was intriguing, if not entirely satisfying, but Meier's sophomore effort is a film which constantly surprises. After an unspecified time period, Simon is delighted to find Louise waiting for him at the base of the mountain, near the locker which transforms him from apartment poverty to resort riches. She's a bit drunk and Simon pulls her home on his sled. They have an assortment of strangers' sandwiches for dinner. It's Christmas time and the two go out to cut a bedraggled tree, but when they get back, a guy pulls up, Louise reminds Simon she's always hated Christmas and she's off, for who knows how long. Back on the mountain, Simon tries to ingratiate himself with Kristin Jansen (Gillian Anderson, "The X-Files"), an obviously monied tourist with two small daughters, by concocting the story he wishes were true. He's also caught out stashing skis in a restaurant store room by Mike (Martin Compston, "Red Road," "The Disappearance of Alice Creed"), a British seasonal worker who begins to do business with the little thief. But when Louise returns home with a new guy in a BMW and begins concocting stories of her own, Simon retaliates and a shocking truth is revealed. In the press notes, Meier reveals that when she was a young girl, she had observed someone very like Simon at the ski resort she frequented and that the boy was eventually banned. She's taken that memory and made it real with a heartbreaking psychological profile and her young star who came to her first film with no experience commands the screen. Young children living by their wits have been part of cinema since its earliest days. What makes Meier's film stand out is firstly, her location. We have a humdrum apartment tower at the base of a mountain (which requires crossing a busy highway to reach) contrasting with the lush environs of the ski resort and the homes which surround it above. But we're always experiencing that resort from the outside in - through restaurant kitchens and bathroom stalls and worker locker rooms. Only once do we see Simon really blend in with the locals, eating a sandwich on a deck like he belongs and, ironically, it is here that temptation unmasks him in public. Mottet Klein has the slight build of an artful dodger and a face that is both cherubic and somewhat feral. He can disappear or stand out and the actor imbues his Simon with a resourceful maturity. And yet he's no old soul. He's a child still yearning for a mother. Seydoux is a trampy wreck, a bruised beauty who flips from abandonment from responsibility to desperation, both headed towards oblivion. She's a bit of a mystery whose own agenda trumps that of what should be her dependant, but by the end of the film, she'll have you. In small roles, Anderson and Compston add different levels of exotic color. The young Gabin Lefebvre proves Meier's ability with children as Marcus, Simon's ill-considered recruit. Meier and her writing partners have tucked all kinds of little tells into their screenplay, like the gifts Simon and Louise give each other and the way each reacts upon its acceptance. An adult views Simon as a child until that child exploits another, a convenient excuse to shed misgivings. Another has the wherewithal to value truth over compassion, annoyed whether status is undermined or taken advantage of. Cinematography by Agnès Godard ("Home," "35 Shots of Rum") features wide vistas and small spaces, the film's final image a psychological flip flop. "Sister" is the Swiss submission for the 2012 Foreign Language Film Oscar, Meier's second such distinction. She may single-handedly put Swiss film production on the map.

Things begin as described as Simon plies his trade, watching the well-to-do skiers and quietly and quickly taking top-of-the-line skis, bindings, helmets, goggles, gloves and more. It is a lucrative business for a young boy and one he runs to take care of Louise and him. But, she does not reciprocate and leaves Simon alone for long periods when she goes off with the wrong kind of guys. The resourceful lad manages well for himself until one day he is caught when he steals a tourist’s gloves and is badly beaten in the process. Then, the story takes an unexpected turn and the lines between brother and sister shift as Simon and Louise’s real relationship becomes revealed. The complexity of these two character studies is a challenge well met by the film’s stars. Young Kacey Mottet Klein does an impressive job portraying the resourceful, smart Simon whose care for Louise is palpable. He is strong but he is still just a vulnerable boy and has emotional needs for maternal love. Lea Seydoux is his equal as his sister who is not his sister. The bond between them may be tenuous from day to day but it is strong over time. These are two lovely performances. Director and co-writer Ursula Meier (with co-scribes Antoine Jaccoud and Gilles Taurand) does a deft job in both storytelling (see her offbeat previous film, “Home”) and directing her small but very talented cast. The wintery Swiss locations and the contrast between the wealthy at the resort and the working classes living far below at the base of the mountain are an excellent backdrop for this touching and believable “love” story.