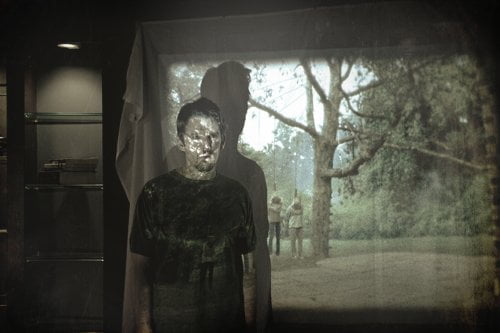 Seeking inspiration, true crime writer Ellison Oswalt (Ethan Hawke, "Before the Devil Knows You're Dead") moves his young family into a house whose previous occupants were murdered except for one little girl who was never found. He strikes pay dirt when he finds a box of home movies documenting not only these murders, but many more. Keeping his find secret in hopes of a lucrative scoop, Ellison soon finds he's dancing dangerously with something "Sinister."

Cowriter (with C. Robert Cargill of Ain't It Cool News)/director Scott Derrickson ("The Exorcism of Emily Rose") knows how to serve up some creepy atmosphere and jumpy jolts, but he and Cargill haven't overcome a major problem with this film - if the plot logic falls completely apart with the first question you ask yourself and continues to unravel with the second, any scares that have been manufactured lose the residual effect they may have had. Such is the case with "Sinister," a movie with some fine performances and an outstanding, creative score by Christopher Young ("Drag Me to Hell"), that provides the heebie-jeebies while you're watching it but won't have you checking beneath your bed later on. We also have to get by a couple of big leaps of faith in early goings. Although the town Sheriff (Fred Dalton Thompson, "Secretariat") shows up on moving day, Ellison's wife Tracy (Juliet Rylance) doesn't know the history of the house, nor, apparently, does anyone in town fill her in. That info's left for a 2nd act marital blowout. The house's murder is the first thing we see, and yes, it's pretty disturbing, but it involves the sawing off of a backyard tree branch. The branch, which one would imagine would be crime scene evidence, is still resting against the tree when the Oswalts move in, the better to let the really, really slow members of the audience make the connection. Ethan Hawke does a decent job as the writer trying to resurrect his glory days of a ten year-old bestseller who is clearly becoming quite frightened by what he's discovering, but not enough to get his family out of danger. Soon after they move in, son Trevor's (Michael Hall D'Addario, "People Like Us") prior night terrors resume, intensified and little Ashley (Clare Foley, "Win Win"), a budding artist, draws dead people (this is how mommy finds out she's living in a murder house). After Ellison spots a creepy hooded figure in one of the murder movies, he finds a box lid with childish drawings of all the murders, indicating the presence of a 'Mr. Boogie' in each and sure enough, he finds the guy in all the rest. Then every night (around "Emily Rose's" 3 a.m. witching hour), Ellison awakens to discover super 8 murder films running in his office, which per Tracy, is supposed to remain locked so as not to disturb the kids. He makes a connection with the town's star-struck Deputy (James Ransone, HBO's 'Treme,' who should have a 'comic tension relief' balloon above his head) that the family that was murdered in his house had moved from one of the previous murder homes. And all the murders involved a missing child. These snuff films supply most of the film's eeriness (largely helped by a score that includes "The Strangers'" skipping records, backwards audio, Gothic chanting and what sounds like a loop of the beginning instrumentation of The Beatles' "Tommorrow Never Knows"). When the supernatural aspect of the story starts to bleed in, a lot of the tension goes out. And while the filmmakers should be congratulated for not going for a 'happy' ending, the final big reveal is really underwhelming, raising more questions about logistics than Mr. Boogie. Derrickson also succumbs to some overused horror tropes - the 'loud noise' jump, the 'jump out' fright and the framing of subjects in corners surrounded by hidden areas or big pools of blackness. It doesn't help that the film's spectre, a pagan deity known as Bughuul (stuntman Nicholas King), looks more and more like "Saw's" Jigsaw the more we see of him, and he's clearly watched "One Hour Photo" once too often. There's a nice uncredited appearance by Vincent D'Onofrio as occult expert Professor Jonas, who makes a couple of appearances on Skype. But listen to his explanations, think about how well they work for the author we're watching and then try to backwards apply it. Like the whole moving from one murder house to the next connection, there's really no there there.