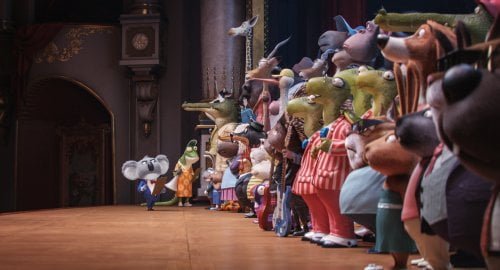 Buster Moon (Matthew McConaughey) is an old school showman on hard times. His once popular theater is threatened with foreclosure and the cagey koala comes up with a plan to save his beloved music palace. He scrapes together everything he has ($1000) and puts out flyers for open auditions. But, a typo ($1000 became $100000) draws not just a few, but thousands, who want to “Sing.”

Directed by first-time Christophe Lourdelet and Garth Jennings (who made the marvelously quirky “Son of Rambow (2007)), this is an old-fashioned, let’s-get-everyone-together-and-put-on-a-show!, Mickey Rooney/Judy Garland-style animated musical populated with all manner of colorful and wacky creatures who all have one thing in common – love of song. And, there are many songs by the talented cast who give voice to the animated menagerie. The koala is stunned by the mistake made by his crotchety iguana secretary, Miss Crawley (Garth Jennings) but decides to go with the flow and hold the auditions for the gathering throng of contenders for the prize. Buster neglects to tell anyone that there is not any $100K. Following is the expected montage of the variety of contenders, including a farting Ox and a quintet of diminutive, giggling Japanese foxes. Among the contestants, and soon to be the finalists, are the son of gorilla gangster, Johnny (Taron Egerton), the insecure mother of 25 little piggies, Rosita (Reese Witherspoon), an irreverent saxophone-playing mouse named Mike (Seth MacFarlane), a stage-frightened elephant named Meena (Tori Kelly) and a sassy punker porcupine, Ash (Scarlett Johanson) - each one colorful and, mostly, cuddly (not prickly Ash, though). The music, while staged for the visual entertainment of the younger audience members, are a cornucopia of classic songs like “Baker Street,” “Take Five,” “I’m Your Venus,” the Beatles “Get Back Home” and the late Leonard Cohen’s “Hallelujah’ – all right up my alley – plus, many original songs. I am no fan of musicals – I am probably one of the few people on the face of the earth who did not succumb to the charms of “Froze” - but the old-fashioned feel good story by Garth Jennings makes “Sing” a likable addition to this year’s animated features. I give it a B. Laura: "Sing" has a few cute moments involving a snail and a Japanese girl group. Unfortunately these characters disappear early. The film should entertain children, but adults may have deja vu - haven't "The Muppets" already covered this terrain?