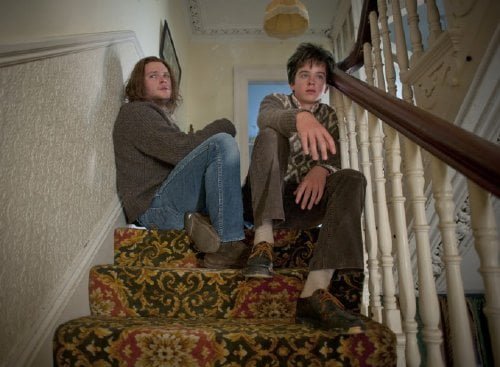 In early 80's Dublin, 15 year-old Conor's (newcomer Ferdia Walsh-Peelo) out of work parents can no longer afford his private education. Navigating the rougher, state-run Christian Brothers school, he comes up against school bully Barry (Ian Kenny). A friendly face, Darren (newcomer Ben Carolan), gives him advice that also helps Conor meet the older, more worldly model Raphina (Lucy Boynton, "Miss Potter"), whom Conor offers a music video gig. Only problem? He's got to form a band. He does and names it after his school, "Sing Street."

Writer/director John Carney ("Once") has become the go-to guy for the modern movie musical, having created a formula (talented, but struggling musician finds love) that works. While his last, "Begin Again," was set in New York with recognizable stars, this time Carney takes the autobiographical route with an ensemble of impressive newcomers. It's a blast of 80's nostalgia specific to a place but universal in its music. Darren connects Conor with another Synge Street student, Eamon (newcomer/Corey Feldman lookalike Mark McKenna), a musical prodigy who's all in when Conor, parroting older brother Brendan's (Jack Reynor, 2015's "Macbeth") musical knowledge, passes his sniff test. Deciding they should have a Black member, they approach Ngig (newcomer Percy Chamburuka), who takes up keyboards. Drummer Larry (newcomer Conor Hamilton) and bassist Garry (newcomer Karl Rice) respond to an ad. When Brendan hears their cover tape of "Rio," he advises Conor to write their own stuff. Conor's lyrics, a paean to Raphina, are set to Eamon's music, Darren picks up a video camera and the lads are in business. The film is not only about youthful identification with music (Conor undergoes many changes experimenting with clothing, hair dye and makeup), but the economic hardship in 80's Ireland, the lure of London and the dual love stories of Conor and Raphina and Conor and his older brother Brendan. Walsh-Peelo is a beautiful boy who recruits us easily to his cause with his innocent charm, but it is Reynor who provides the film's melancholy soul. Reynor's Brendan is a long-haired stoner, a former budding musician and 'lost cause' to the youngest's promise, beaten down by the blows he's taken shielding little bro. Boynton's 16 year-old appears somewhat tough when we first meet her, softened as her own vulnerabilities are exposed and by the sweet handling of her youthful suitor, a neat bit of upending first impressions. Carney and Gary Clark wrote Sing Street's original songs, beginning with the Duran Duran influenced 'The Riddle of the Model' through a progression that tips its hat to the likes of Hall & Oates and The Cure (whose original tunes also appear on the soundtrack along with "Begin Again" star Adam Levine's original contribution 'Go Now'). A school dance climax features a fantasy musical ('Girls') and Conor's protest song against the oppressive Brother Baxter ('Brown Shoes'). The band's quick progression is fantastical as well, but it's difficult to quibble with such joy put on film. Director of Photography Yaron Orbach ("Begin Again") uses hand held camera on Dublin locations (including the actual Synge Street School), with mini-DV cameras used to ape VHS video shooting. Costume Designer Tiziana Corvisieri realistically transforms her school boys into DIY New Wavers along with Barbara Conway and Sandra Kelly’s spot on hair and makeup. "Sing Street" begins to sag a bit approaching its dual climax, the latter of which is hopefully romantic in the extreme, but the film is a bona fide crowd pleaser. Grade: