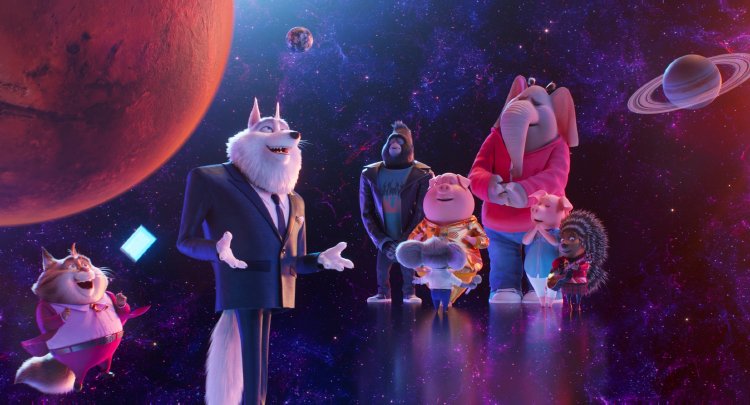 Since we last saw him, koala Buster Moon’s (voice of Matthew McConaughey) rock ‘n roll rendition of ‘Alice in Wonderland’ has become such a huge hit at his New Moon Theater that 'the best scout in showbiz' Suki Land (voice of Chelsea Peretti) attends a show to appraise his troupe for her boss Jimmy Crystal (voice of Bobby Cannavale), whose Crystal Tower Theater is the place to play in the Vegas-like Redshore City.  Suki’s declaration that they’re not good enough fires up Buster’s determination, but when he lands the gig with the white wolf based on chutzpah, a half-baked idea from Gunter (voice of Nick Kroll) and a lie, it will take everything he and his troupe can muster to pull it off in “Sing 2.”

"Sing" writer/director Garth Jennings has pulled off the rare achievement of crafting a sequel that bests his original, opening it with a wild musical number set to Prince’s ‘Let’s Go Crazy.’  In “Sing,” we got to know a whole bunch of characters with dreams – mother-of-twenty-five-piglets Rosita (voice of Reese Witherspoon), shy elephant Meena (voice of Tori Kelly) of the huge voice, Johnny (voice of Taron Egerton)  the gorilla trying to impress his dad and punk rocker porcupine Ash (voice of Scarlett Johansson) – as they squared off in a singing competition devised by Buster to save his theater.  Now they’re a well-oiled and very professional team but the small towners have never dealt with gangster impresarios known for throwing underlings off the roof nor reclusive rock legends like lion Clay Calloway (voice of U2's Bono).

After watching Jimmy turn down every act auditioning, from an ersatz Adele to roller-skating flamingos, Buster, who’s snuck his troupe in posing as floor buffing maintenance, gulps and hits the stage tongue-tied, allowing Gunther to expound upon his own off-the-wall idea of a sci-fi musical called ‘Out of This World.’  Surprisingly, Crystal loves the idea and wants to hear more, leading Ash to begin strumming ‘Where the Streets Have No Name’ which they all begin to sing.  Crystal doesn’t believe they can get the rights, but Buster assures him that not only can he do that, but he’ll sign on its singer/songwriter as well.

If “Sing” had that old ‘let’s put on a show’ vibe, its successor adds all the drama of a 1930’s Hollywood backstage movie, with everyone having to deal with their own obstacles and insecurities.  With Buster given the funds to build lavish, out sized sets including a towering platform for Rosita to fly off of on a wire for her opening number, the sweet singing pig discovers a crippling fear of heights, one which Jimmy’s daughter Portia (voice of Halsey) does not, leading to her taking over the lead.  Rosita is crushed, but gamely takes on a lesser role, only for Buster to learn that while Princess Portia can sing, she can’t act her way out of a bag.  Meena (voice of Tori Kelly) is paired with an outsider, Redshore City legend Darius (voice of Eric André), a bull so enamored of himself he cannot remember her name, while ice cream vendor Alfonso (voice of Pharrell Williams), another elephant, is captivated.  Johnny (voice of Taron Egerton) is intimidated by dance coach Klaus Klickenkopper (voice of Adam Buxton) who only succeeds in crushing his confidence (he’ll begin a surreptitious alliance with street dancer Nooshy (voice of Letitia Wright) that revitalizes the whole show).  And when Buster’s googly-eyed iguana assistant Miss Crawly (voice of Garth Jennings) hits the road in style to persuade Calloway to come out of seclusion, she’ll return in a totaled vehicle.  Miss Crawley’s put in charge of rehearsals while Buster and Ash set out to save the former from a more fatal kind of high dive, with hopes that Ash’s rocker status and love of all things Clay will get through to the grieving widower.

The film has been expanded in all the right ways, from cast additions, to the film’s production design and character costuming.  Another radical difference is that instead of a bunch of toons lip-syncing hit songs, tunes by Elton John, Billie Eilish, Drake, The Weeknd, Taylor Swift and more have been worked into the soundtrack more naturally, and when a character does sing it’s not always for performance, like Ash crooning ‘Stuck In A Moment You Can’t Get Out Of’ to pull Clay back to the land of the living through his own music (the film also features an original U2 song, 'Your Song Saved My Life').  About the only reliance on recycling here are Crystal Towers’ overnight cleaning lemurs, Illumination essentially repurposing its minions by adding fur.

Jennings pulls all the various strands of Moon’s pending disaster together in the most delightful ways everyone’s path perfectly righted, Moon having proven himself once again to his original backer Nana (voice of Jennifer Saunders).  After the crush of heavyweight movies critics must see in an end-of-year onslaught, “Sing 2” brought me unexpected joy.

Buster Moon (Matthew McConaughey) was a successful showman the last time we saw him but, now, he sets his sights on even greater fame and fortune. For him and his talented crew to go national, though, he needs the backing of the biggest promoter and that means finding a reclusive former rock star to put on THE big show in “Sing 2.”

When I saw the original “Sing” back in 2016, I was not impressed too much with its clichéd “let’s put on a show!” vibe. So, I was not really looking forward to a sequel to what was a middling animation, at best. I was wrong.

Garth Jennings returns to helm and script “Sing 2” (solo this time) and it is just as if he took all of the clichés of the first “Sing” and pared it down to what works best. This follow up is a nostalgic assembly of the best of the old “Our Gang” put-on-a-show shorts and the classic Mickey Rooney/Judy Garland musicals of the 1930s. The old-fashioned essence works especially well here.

Buster, Rosita (Reese Witherspoon), Ash (Scarlett Johansson), Johnny (Taron Egerton), Gunter (Nick Kroll) and the rest are back and are ready to go big time and bring their act to Redshore City. To get there, Buster approaches heavy-hitting music mogul, Jimmy Crystal (Bobby Cannavale), and gets the big chance he has been waiting for. But, there is a catch: to secure the gig, Buster promises to bring the long-secluded rock star, Clay Calloway (Bono), out of his self-imposed, 15-year long “retirement” to star in the show.

Where the original focused on working up to the big show finale, this time the players, fully developed from the first, are split up into factions that set out to bring together, well, the big show finale. Here, though, we have several different missions put into play to accomplish that expected finale. This gives the lovable players the chance to perform and play as they each face their own obstacle.

The division of labors helps flesh out the characters even further and each of their stories holds its own hope, obstacles to overcome and peaks to climb. I enjoy the feel-good nature of the story and its themes of love, friendship and helping others. The messages are wrapped in a colorful musical montage with songs that will please its mostly young audience. But, it is a clever story that has appeal to an old guy like me.