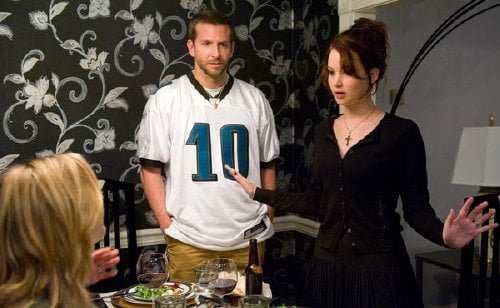 When Delores Solatano (Jacki Weaver, "Animal Kingdom") returns home with her son Pat (Bradley Cooper) who's just spent 8 months in a psychiatric hospital, it's clear Pat Sr. (Robert De Niro) wasn't expecting him. Dad, who has compulsive habits of his own, tries to connect to his son via his beloved Philadelphia Eagles, but Pat, who rejects his bipolar meds, is obsessed with winning his ex-wife Nikki back. Then he's thrown into the path of another troubled soul, Tiffany (Jennifer Lawrence, "The Hunger Games"), who agrees to help him if he'll partner with her in a local dance competition. Football wagers, dance and exes all converge one night in Baltimore in "Silver Linings Playbook."

Writer/director David O. Russell ("The Fighter") has concocted one of the most weirdly energetic, and certainly most original, romantic comedies in decades and the surprising pair up of Bradley Cooper, putting himself on the acting map here, and the fifteen year younger Jennifer Lawrence, solidifying her chops, is a dazzler. Russell's direction and adaptation of the Matthew Quick novel is something to behold, a light-on-its-feet whirlwind of comedy anchored with serious issues which whips up to a frothy winner of a climax. In addition to dad's discomfort at having his son home (we learn that he almost beat a man to death when he discovered him in flagrante with his wife), we cotton on to just how wacky these folks are when the police come calling for Danny (Chris Tucker, "Rush Hour"), the friend who hitched a ride despite the fact that he hadn't been released. When Pat goes to see his shrink, Dr. Patel (Anupam Kher, "Bend It Like Beckam"), he has a mini-breakdown brought on aurally by "My Cheri Amour," he and his wife's 'song,' which he's not sure if he's hearing for real or in his head. When he heads to the high school where he taught, his former principal (Patsy Meck) is obviously terrified. Then there's the wedding video incident, in which Pat acts out so violently he accidentally hits his mom, knocking her down. There's one person in the neighborhood who proffers a welcome, though, Pat's friend Ronnie (John Ortiz, "Jack Goes Boating," HBO's 'Luck'), but Pat's suspicious when he's extended an invitation to dinner because he thinks Ronnie's controlling wife Veronica (Julia Stiles, "The Bourne Ultimatum") hates him. Maybe she does, but she sees an opportunity to solve her own family problem - her sister Tiffany, who's been in a spiral of depression since her policeman husband died and whose acting out sexually has garnered her a bad reputation. Tiffany's the flint to Pat's spark and she refuses to appease him. And yet, she begins to appear during his daily runs and soon has him practicing dance moves in her studio. Russell has his leads speak the sped up manic dialogue delivery of "The Social Network," their manias turning them into a kind of off-their-meds "His Girl Friday" Grant/Russell pairing. Cooper is paralleled by De Niro, with dad's obsession for football bets, superstitious rituals and penchant for flying off the handle soothed by Delores's perky game day prescription of 'crabby snacks and home mades.' When Pat Sr.'s buddy Randy (Paul Herman, HBO's 'The Sopranos,' "Crazy Heart") gets his better on a bet, Tiffany rises to the occasion with a show-stopping analysis of the New York Giants' motto that makes the men stop in their tracks, only to see the bet ridden with her and Pat Jr.'s dance score added to the equation. Pat's belief that his ex, Nikki (Brea Bee), will be there based on a secret letter passed on by Tiffany only adds to her burden. Watching "Silver Linings Playbook" is not unlike watching the Roadrunner play tennis as Russell zigs and zags, throwing all kinds of off kilter details into his frame. A trip to a game where Pat Jr. subs for Pat Sr. due to his banishment from the stadium offers up a surprise in the form of Pat's doctor shed of his professional persona. A first date in a diner on Halloween night is notable for its awkward, weighted ordering. The climatic dance is a jewel of manic choreography where every dance style known to man is crammed into a single performance. "Silver Linings Playbook" is that rare thing, a top notch comedy orchestrated by a director with a talent for teasing out the unexpected. The happy ending may be about the only thing we see coming, but it's perfect nonetheless because of the bizarre confluence of events that get us there. This is one to cherish and cheer for.