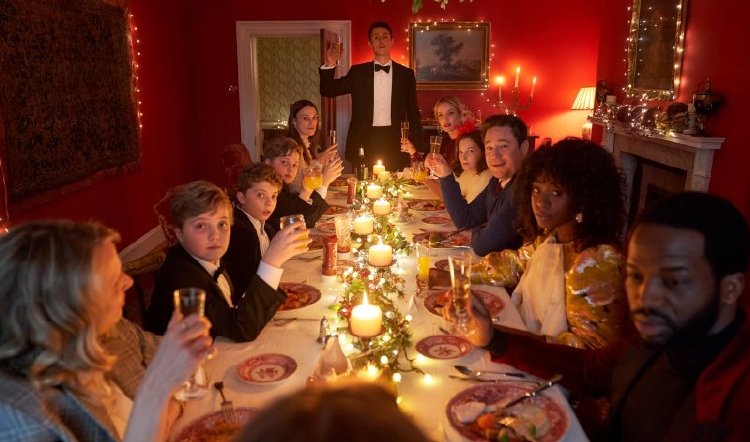 Nell (Keira Knightley) is busy in the kitchen, preparing a Christmas feast for a still tight-knit group of friends from college in her beautifully appointed, massive English countryside home.  When her best friend Sandra (Annabelle Wallis, "Malignant") arrives with husband Tony (Rufus Jones), Nell realizes she has a crisis on her hands, having forgotten the sticky toffee pudding their daughter Kitty (Davida McKenzie) absolutely must have and we get our first sense that something isn’t quite right when she sends her husband Simon (Matthew Goode) to break into the local Tesco’s to get one in “Silent Night.”

Writer/director Camille Griffin makes her feature debut proposing that the wealthy upper glasses which most frequently land in her country’s positions of power are also most frequently morally questionable in their decision making.  But while Griffin’s premise is strong, unfortunately it is swamped in a black comedy which is rarely funny with a (fairly obvious) twist ending Stephen King devised forty years ago.

The next to arrive are Bella (Lucy Punch) and Alex (Kirby Howell-Baptiste), the latter’s refusal of alcohol signaling an issue, her hosts’ substitution of soda for her requested sparkling water another red flag.  Something isn’t right out there in the world.  Then we’re distracted by the arrival of James (Sope Dirisu, "His House") and Sophie (Lily-Rose Depp), Sandra behaving badly by draping herself over him while making snotty remarks about his partner’s youth.

It is around the dinner table and out of the mouths of babes that we finally learn the truth, Nell’s eldest, Art (Roman Griffin Davis, "Jojo Rabbit," the filmmaker’s son), observing that the Queen appeared to make her Christmas speech from a bunker stuffed with cans of baked beans and dog food.  Kitty pipes up that the Russians are sending poison gas their way, but no, this is disputed by Art who says the planet has simply ‘had enough.’  Yet Kitty is pleased that their government has come up with a solution, an ‘EXIT’ pill to relieve suffering.

While the adults come clean with their children (‘every living thing will die’), they also absolve themselves of any responsibility as they drink, exchange gifts, dance and, in Sandra’s case, make spectacles of themselves.  Young Art, whose twin brothers Thomas (Gilby Griffin Davis) and Hardy (Hardy Griffin Davis) can barely tear themselves away from video games, is having none of it, convinced that the illegal immigrants denied ‘EXIT’ can be helped (and a ‘BR’ to the beginning of that pill name) and that there is hope to be had.  He finds an ally in Sophie, who is refusing to take ‘EXIT’ because she is pregnant and refuses to harm her child.

Griffin’s production gets everything right about the well heeled traditional British holiday gathering, the house and its setting ideal, her beautiful ensemble dressed to the nines (‘You’re wearing my education on your feet,’ explains Kitty, refusing to give her mother a kiss).  Most of these characters are horrible or simply cluelessly entitled, leaving young Griffin Davis (and Depp) as the film’s moral center, a role he upholds admirably.

AMC+ and RLJE will release "Silent Night" in theaters and streaming exclusively on AMC+ on 12/3/21.