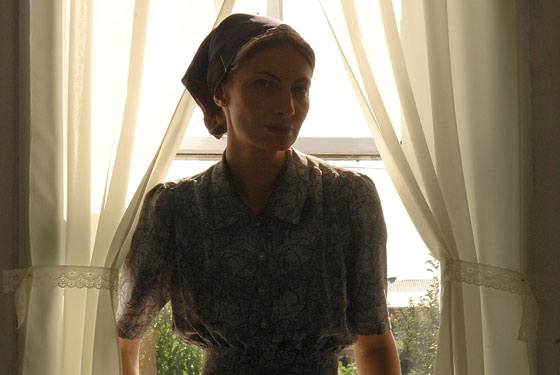 In a plain German Mennonite order in Chihuahua, Mexico, Johan (Cornelio Wall) has begun to talk, first to good friend Zacarias (Jacobo Klassen), then to his father (Peter Wall). Their opinions differ, but Johan's father warns that a drawn out decision will lose him everything, and so Johan must decide whether staying with Esther (Miriam Toews), the wife he still loves, or leaving for Marianne (Maria Pankratz), his lover and soul mate of two years, is the best path towards God's glory in "Silent Light."

In his first two films, writer/director Carlos Reygadas ("Japón," "Battle in Heaven") used shocking sex acts in allegorical films about religious redemption. In his third, while sex is still in the air, this time as an adulterous affair, Reygadas uses more restraint and has created a masterpiece contemplating love and free will with stunning visuals and natural sound. "Silent Light" may be the most Scandinavian of art films made by a Mexican director in his home country. The film opens with a gorgeous shot that gives us heaven and earth before a slowly breaking dawn accompanied by the sounds of crickets giving way to farm animals and birdsong (Alexis Zabe's ("Duck Season") stunning widescreen (2.35:1) cinematography and Raul Locatelli's sound could easily have been among last year's Oscar nominees). After that slow pan, Reygadas uses a series of static shots to establish Johan's family, his wife and seven tow-headed children all sitting silently around the lovely farmhouse kitchen's table in quiet prayer. After breakfast, Esther herds the children out, the littlest one's head barely scraping the bottom of Zabe's frame, and returns to suggest Johan spend some time alone. It is clear he is troubled and about equally clear that she knows, if not knows why. After Zacarias advises Johan that 'a brave man makes destiny with what he has,' but also that there 'might be something sacred' in his relationship with Marianne, Johan decides he will visit Marianne and circles Zacarias in his pickup, exuberantly sing along with a lusty Spanish song on the radio (the Mennonites speak an Old German, Plautdietsch, among themselves). After his assignation in a field, where light refracting from Zabe's lens creates an otherworldliness (an effect used only once again near film's end), Johan visits his father to tell him he is in love with another woman. After diverting Johan's mother (Elizabeth Fehr) his father (real life father to lead Cornelio Wall) tells him something he has told no one before, setting an example but proffering no actual advise. In these two scenes alone, Reygadas upsets the traditional notion that men do not talk about emotions - here they do, movingly and eloquently and, indeed, spiritually. Johan has told his father that he has told Esther everything since the beginning, almost two years prior, and soon her life intersects her husband's lover's when Marianne sends someone to him to deliver an express order to her business as he works in the fields with his wife. Esther suggests going into town would be a good opportunity to take their children to the dentist, and so with kids in tow, Johan arrives at Marianne's restaurant where the two scurry off to her office. After lovemaking, Marianne makes a startling pronouncement that Johan denies internally, but his subsequent action causes a shocking reaction from Esther. Reygadas lets his story unfold very slowly, with long interludes of hay being threshed or children hanging about a manmade pond. This type of filmmaking frustrates some, but it is essential here to establish man's bond with nature, not to mention the profound beauty of it all. After a long session watching their children around the water, we see Johan and Esther washing a little one (the rite foreshadows another) and the bond between them is palpable (Johan always compliments his wife and tells her that he loves her, even as he is physically overcome by Marianne). Wisely, Reygadas does not go the typical route with his love triangle - instead of the older man/younger, prettier woman situation which is so routine, in their 'plain' clothes, Esther and Marianne almost resemble each other. In fact, Esther could be seen as the physically more attractive of the two, emphasizing the otherness involved in man's relationship to his 'natural' woman. There are many ways one could interpret this simple tale, just as its peripheral characters speak differently of God and Devil, but it seems clear that, in essence, God takes away Johan's free will only to have Marianne restore it (the film's ending can be traced to Carl Dreyer's "Ordet"). Zabe frequently frames the subject who is speaking in profile, giving even more weight to their infrequent words. He precedes the film's raw, emotional climax with a shot of verdant green racing away in a car's rear view mirror before a downpour that could be tears from heaven above. "Silent Light" is a stunning, transporting film that sadly received very little theatrical distribution - had it opened in Boston, it easily would have topped my 2008 top ten list.

The big draw by the filmmakers for “Silent House” is the claim that it is done in one continuous take and, like Alfred Hitchcock’s “Rope,” provides a technically appealing pull for audiences. However, technical tricks do not always make for an interesting film and “Silent House” is a one-note film. Elizabeth Olsen shows the terror of a young woman trapped in a creepy house being stalked by “something” but that is the extent of her emotional range here – look up the movie poster and you see the only emotion Olsen is allowed - fear. The young actress fared far better in “Martha Marcy May Marlene.” “Silent House” hangs on the cliché premise that someone, all alone, in a scary, dark and forbidding house will do stupid things, like go down into the basement or up into the attic. I suppose that if the protagonist reacted like normal people – dig a hole and pull it in behind me – the movie would last 10 minutes. As it is, the film’s 85 minute run time feels bloated and way too long. Technically, it is interesting to watch but a better, less ambiguous, story is needed.