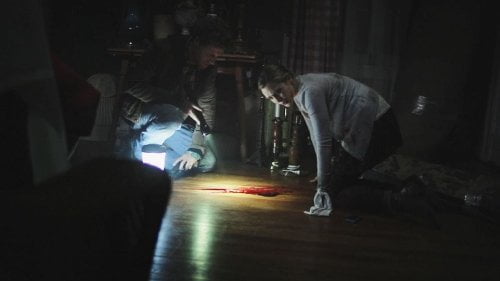 Sarah (Elizabeth Olsen) and her father, John (Adam Trese), and uncle, Peter (Eric Sheffer Stevens), travel to their long empty summer home to clean it up and get it ready for sale. Vandals had broken most of the windows and the place is now all boarded up and padlocked. In the darkness, with only lanterns and flashlights to illuminate things, Sarah starts hearing strange and frightening noise in the not so “Silent House.”

Sarah (Elizabeth Olsen, in her other Sundance 2011 movie) is with her dad (Adam Trese, "40 Days and 40 Nights") and his brother Peter (Eric Sheffer Stevens, "Julie & Julia") prepping the old family summer home for sale. She's a bit jittery and when she hears a noise upstairs she sends dad to check it out. But when he doesn't return, Sarah begins to see things that indicate that the squatters they've seen evidence of may be inside of their "Silent House." Codirectors Chris Kentis ("Open Water") and Laura Lau ("Open Water's" producer/cinematographer) obviously like technical challenges - after shooting "Open Water" on the, well, open waters, they go in here for the one single take challenge, and even though they've disguised a few connective edits, it's an impressive piece of directorial choreography. But with this 'reimagining' of "La casa muda", Uruguay's submission for the Foreign Language Oscar, they never establish an organic family unit, thereby deep sixing their big climactic twist. We first see Sarah in an overhead shot at water's edge before following her back to the titular house. There her father, John, and his brother Peter, both acting more like older brothers, have unconvincing conversations about what needs to be done. Sarah simply seems dazed. When she answers a knock at the front door, it's clear she doesn't remember Sophia (Julia Taylor Ross), the young girl claiming to be a childhood playmate, but Sophia's promise to return later provides an anticipated rescue (and, as adapted from Gustavo Hernández's film by Lau, also suggests a possible threat a la "The Strangers," one of Lau's better ideas). After Uncle Peter heads into town for something, Sarah's dad reminds her why they're there. A few minutes later, she discovers him still alive but seriously injured by a bash in the head. We follow her in her escalating fright and panic as she discovers that she appears to now be locked into the house and we see a strange man (Adam Barnett) behind her. Things get weirder and weirder. There's a little girl wandering about and someone appears to have made a home in the basement (yes, she ventures down there, but in the film's defense, it's to try the bulkhead as means of escape). When Uncle Peter returns, he insists on going in to look for John despite his niece's obvious terror. Locked in the car, she spies an indicator light that will give one chills. But it's difficult to empathize too much with Sarah's plight. In an almost wordless performance, Olsen must stay in character for longs periods of time, hitting her mark as she maneuvers in the dark (oddly, the house seems pitch black even though it's merely dusk by the time Peter returns), but as everything's seemed artificial from the very onset, her reactions seem extreme. With just three people involved, no one communicates effectively or reacts as the situation would seem to demand. Sheffer Stevens and particularly Trese act more like frat boys than responsible adults. The house itself and its location, made to seem remote via visual trickery, have been well chosen and dressed with great wallpaper suggesting past decades without seeming dated, an interior designer's delight. But the filmmakers' attempt to use it as a psychological reflection of Sarah's state of mind doesn't work. "Silent House" is interesting as a technical exercise, but as horror it's hokum.

The big draw by the filmmakers for “Silent House” is the claim that it is done in one continuous take and, like Alfred Hitchcock’s “Rope,” provides a technically appealing pull for audiences. However, technical tricks do not always make for an interesting film and “Silent House” is a one-note film. Elizabeth Olsen shows the terror of a young woman trapped in a creepy house being stalked by “something” but that is the extent of her emotional range here – look up the movie poster and you see the only emotion Olsen is allowed - fear. The young actress fared far better in “Martha Marcy May Marlene.” “Silent House” hangs on the cliché premise that someone, all alone, in a scary, dark and forbidding house will do stupid things, like go down into the basement or up into the attic. I suppose that if the protagonist reacted like normal people – dig a hole and pull it in behind me – the movie would last 10 minutes. As it is, the film’s 85 minute run time feels bloated and way too long. Technically, it is interesting to watch but a better, less ambiguous, story is needed.