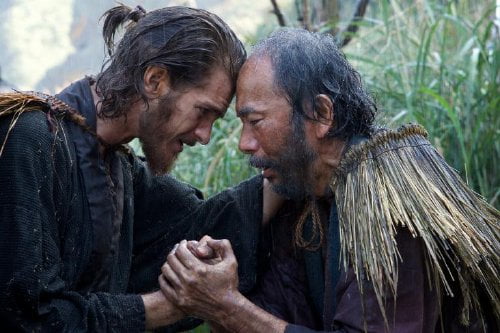 In 1643, Father Valignano (Ciarán Hinds, "Bleed for This"), head of the Jesuit University in Macao, informs Father Rodrigues (Andrew Garfield, "Hacksaw Ridge") and Father Garrpe (Adam Driver, "Star Wars: The Force Awakens") that their mentor, Father Ferreira (Liam Neeson), has apostatized in a formerly receptive Japan now intent on eradicating Christianity. Neither Rodrigues nor Garrpe are willing to believe the Portuguese missionary would have renounced his faith, convincing Valignano that it is their God given mission to travel into dangerous territory and find him. Once there, they are hidden by devout villagers, but Inquisitor Inoue (Issei Ogata, "The Sun") soon picks up their trail. As villagers are tortured and killed, Rodrigues, who can save them by apostatizing himself, looks to God for answers but hears only "Silence."

Cowriter (with "Gangs of New York's" Jay Cocks)/director Martin Scorsese has been working on this passion project since the late 1980's. Adapted from the novel by Shûsaku Endô, this is a powerful film about crisis of faith, human courage and weakness and the arrogance of colonialism. Andrew Garfield has received a lot of attention for his performance in Mel Gibson's "Hacksaw Ridge," but it is his Father Rodrigues that is far more deserving of praise, a deep sink into the emotional torture of contemplating saving lives at the cost of publicly renouncing his God. Also towering is Ogata, who gives a sly, spirited performance as the feared Inquisitor. As the two priests wait to board a junk at a fishermen's hangout, the proprietor offers Kichijiro (Yôsuke Kubozuka), a matted drunk who says he is not Christian, as their guide. The rough start does not bode well, but Kichijiro leads them to disembark on the banks of Tomogi where Christianity thrives in secrecy. Village elder Ichizo (Yoshi Oida, "The Pillow Book") gathers the faithful, and, despite the danger, insists upon sheltering Rodrigues and Garrpe in a coal shack on a hill. The villagers are gifted with Rodrigues's rosary beads while he, in turn, accepts a small, rough carving of Christ on the cross. Kichijiro is nowhere to be found. After sheltering indoors to avoid detection and with no idea how to reach Nagasaki, where Ferreira reportedly lives with his Japanese wife, Garrpe's going stir crazy so the two men venture outside to sunbathe on a rock. Rodrigues panics when he spies two men hidden in the tall grass, but these turn out to be emissaries from Goto, another Christian village which has learned of the priests' presence. Rodrigues travels there and finds Kichijiro, who confesses his sin of apostatizing as he watched his family, who refused, be burned alive (we see the horrifying scene in flashback). But the safety of all is short lived as Inoue's Interpreter (Tadanobu Asano, "47 Ronin," "Thor") arrives. Early on, we see Ferreira, hands bound, being led along the rocky coast where the faithful are crucified by a hot spring, the Japanese dribbling the scalding water over them to lengthen their pain. Rodrigues witnesses Ichizo and old villager Mokichi (Shin'ya Tsukamoto, actor/director "Tetsuo, The Iron Man") crucified in the rising surf. It takes Mokichi four days to die. All of these faithful have been asked to step on a fumie, a copper block with a raised image of Christ. Their refusal means torture and death. When Rodrigues is betrayed and taken to Nagasaki to be jeered at in the streets, then imprisoned across from Christian peasants (including Kichijiro, Rodrigues's constant trial), the fumie is brought out daily and Rodrigues must watch as people are dragged away, one beheaded in front of him. When he's told he is going to be brought 'to see something,' it means a painful reunion with Garrpe and more death (Driver is as gaunt as an old wood carving, the actor having lost a significant amount of weight for his role). Finally brought to witness the fate of his neighboring imprisoned flock, Rodrigues sees them suspended, their heads below ground, slowly being drained of blood from small incisions in their necks. As the fumie is once more placed before him, Rodrigues finally hears God speak to him. The film's closing image is a knockout. Scorsese's film clocks in at almost three hours, but this tale, at once majestic and intimate, never flags. Director of Photography Rodrigo Prieto ("The Wolf of Wall Street") captures the stark beauty of violent coasts (the film was shot in Taiwan), mysteriously foggy ocean crossings and the grandeur of Catholic edifices, but he also uses closeups, often in dimly lit interiors, that convey the pain, fear and faith of the Christians, the upper handed wiliness of the Japanese. Production design and costuming by Dante Ferretti ("Hugo") have been rigorously researched. Scorsese stalwart Thelma Schoonmaker ("The Wolf of Wall Street") edited the film. Kim Allen Kluge and Kathryn Kluge's minimalist, naturalistic score is subtly effective. "Silence" questions the meaning of faith and goes to unexpected places. The historical account will be of interest even to those who are not coming from the same place as its director. It is a work rich in artistry from one of America's greatest filmmakers. Grade: