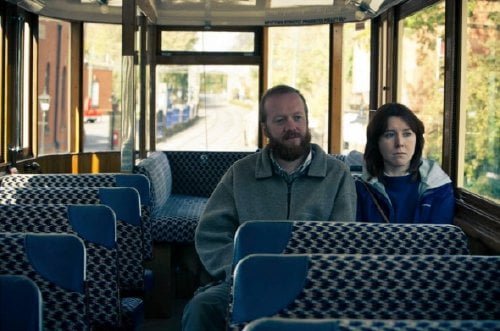 Tina (Alice Lowe, "Hot Fuzz") has led a sheltered life with her mother Carol (Eileen Davies, "Bright Star"), currently guilt-tripping her daughter over the accidental death of their beloved terrier Poppy. Carol's suspicious when Tina meets a man, Chris (Steve Oram, "Kill List"), who wants to take her on a caravan holiday but Tina won't be dissuaded from finally getting out from under her thumb. Tina and Chris are going to become "Sightseers."

Director Ben Wheatley ("Down Terrace," "Kill List") and his screenwriting costars have trumped Bobcat Goldthwaite's "God Bless America" with their British caravan serial killer comedy. This gruesomely funny film is an atypical relationship movie stuffed with nuggets of humor mined from both the characters and the landscape they travel through. Hand knitted crotchless panties, anyone? Knitting has been Tina's only refuge, but even that has betrayed her, as we learn in a recent flashback. The idea of a boyfriend has her floating on air and soon they're bonding over shared jokes and rituals ('Mint me!'). But when they stop at the Crich Tramway Museum, a fellow tourist enrages Chris when he drops a wrapper on the tramcar floor and refuses to pick it up. Tina commiserates, but upon their departure, Chris 'accidentally' drives over the man. Additional stops bring them into contact with more people who rub Chris the wrong way, and Tina comes to the conclusion that the way to her man's heart is through murder. Chris appreciates her support, but not not her methods and Wheatley keeps us on edge wondering if her sloppier executions will be the death of her. Lowe and Oram worked out their characters over a number of years, including real caravan trips, and it shows. Their tentative dance conveys two people projecting their needs onto the other, then gradually realizing the real person isn't who they'd imagined. Lowe gets that spirit of rebellion into a reading of a postcard to mum, thumbing her nose at the woman who's furiously cooking up emergencies and having her daughter paged via loudspeaker. Oram flips an internal switch, from easy-going traveler to mischievous mess about to cold eyed judge. Wheatley has quickly become a master of the macabre (his "Kill List" was on my 2012 top ten list) and has shaped Lowe and Oram's story to perfection. Small story points, such as fellow caravaner Janice's (Monica Dolan, "The Arbor") hatred of clutter, become character observations, echoed later on. The ghost of Poppy hangs over the proceedings (Carol brushes her daughter's hair like she's grooming her) until he's literally reincarnated in the form of Banjo (used by Wheatley as an adorably ironic counterpoint). A visual joke at the Keswick Pencil Museum is worked into the plot, as is the invention of Martin (Richard Glover), a fellow traveler befriended by Chris. "Sightseers'" travelogue aspect is also one of its charms, a throwback to motoring vacations touring hokey attractions. From the the Ribblehead Viaduct to the Blue John Cavern, destinations become more remote and less traveled until the duo find themselves alone at "Journeys End." As in "Kill List," Wheatley's wrap may just leave you gasping, this time with laughter leavening the shock.

Chris (Steve Oram) and Tina (Alice Lowe) had been seeing each other for three months when he asks her to take a caravan trip with him across Great Britain to see all the sites he visited while growing up. They set off on the road for an idyllic and romantic vacation but things do not go quite as planned for the “Sightseers.” This is surprising black comedy from the mind of Ben Wheatley and the script by Amy Jump and the film’s co-stars, Alice Lowe and Steve Oram. “Sightseers” starts off innocently enough as the still-tied-to-mummy’s-apron-strings Tina and her short term boyfriend Chris say goodbye to her mum, Carol (Eileen Davis). Mom is against Tina going off with Chris but she finally relents. They hit the road on what should be a carefree romantic adventure. It does not turn out that way. On the bus trip back from their visit to the Crich Tramway Museum, one of the other passengers throws an ice cream wrapper on the floor. Chris is immediately angered by the litterbug and tells the man to pick up his litter. Without turning to Chris, he flips him the bird. Chris is not someone to be crossed as the man will soon find out. This is where “Sightseers” turns to the dark side and I do not want to describe the film any further. It is better to allow the viewer to experience the many dark and stomach-churning funny moments of black humor. It is not often that I laugh (out loud or to myself) at most comedies I see. “Peeples,” for example, elicited a couple of chuckles and not much more. “Sightseers,” on the other hand, pulls no punches with its shocking (but still funny) events and a surprise ending that I did not see coming, but loved nonetheless. Ben Wheatley borrows ideas from his previous film, including “Kill List,” but the story is an original and entertaining (in a slightly sicko way) narrative.