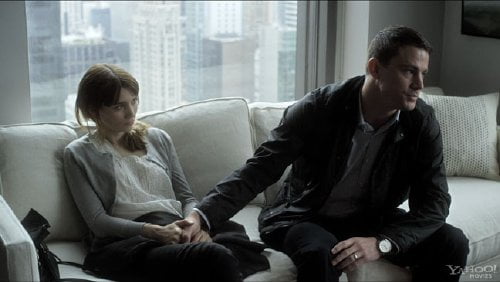 Emily Taylor (Rooney Mara, "The Girl with the Dragon Tattoo") has spent four of her five years of marriage with her husband, Martin (Channing Tatum, "Magic Mike"), in jail for insider trading. She was swept into the good life then left with nothing. Martin is determined to return them to upward mobility, but Em's anxious, even suicidal. She's prescribed a new drug, Ablixa, by Dr. Jonathan Banks (Jude Law, "Anna Karenina"), but Martin is concerned about her reaction to the "Side Effects."

Screenwriter Scott Z. Burns ("The Informant!," "Contagion") had intended to direct this film himself, but collaborator Steven Soderbergh wore him down to take this on as his last theatrical directing job (Soderbergh has said he is retiring from movies, at least for a good long while). One wonders why. The film starts off well enough, but devolves into a hackneyed whodunnit more jazzed about continually pulling the rug out from under the audience than developing realistic characters who would have done any of these things. Sad to say, the best thing about "Side Effects" is the inventive score by Thomas Newman ("WALL*E," "Skyfall"). An overhead shot establishes a homey neighborhood one may be surprised is in New York City before zooming in to one window of an airy apartment. Inside we see a trail of blood leading towards a chair where a wrapped gift and model boat sit before we're flashed back to 'Three Months Earlier.' Em visits Martin in prison. Later, at work, she thanks her boss (Polly Draper, TV's 'Thirtysomething') for being understanding, then heads to the ladies room to vomit. Her boss follows, finds her prescription on the counter, and offers sympathy and advice. Warning sign number one. Once Martin's out, Emily's mental health suffers more. One morning, she gets into her car in the underground parking garage and drives straight into a brick wall. Dr. Banks is the physician on duty, recognizes a suicide attempt and persuades the young woman to come for treatment. He meets with her prior psychiatrist, Dr. Victoria Siebert (Catherine Zeta-Jones, "Rock of Ages," "Broken City"), who recommends the new drug. Martin is alarmed when his wife begins to do strange things in her sleep. One can see that Soderbergh and Burns were trying to make a statement about Big Pharma and the American Healthcare system within the structure of the thriller genre, but their insistence on building upon one 'shocking' revelation after the next becomes ludicrous quickly. The cast is intriguing, but as soon as one of the four major stars, one whose recent filmography features one dud after another, makes an appearance relatively early on, they've shown their hand, especially given the smirking performance at hand. Only Jude Law's trajectory inspires any real interest and by the time justice begins to be dealt, logic flies out the window. This is a B movie, and a not very satisfying one at that. Supporting players are even given short shrift ('Compliance's' Ann Dowd as Martin's mother) or forced to whip their sympathies back and forth so quickly (Vinessa Shaw as Banks's wife, Draper as Emily's boss) they induce emotional whiplash. David Costabile ("Henry's Crime," "Lincoln") and Mamie Gummer ("Evening") do etch convincing characters as a couple from the Taylors' prior life, but they're the exception. Soderbergh's camera envelopes everything in a warm glow, imparting a false sense of warmth that is set on edge by Newman's use of bells in an eerie lullaby. "Side Effects" may make some people start to think about the ethics of the drug industry, but more may be convinced that psychiatric hospitals haven't advanced beyond the snake pit days of decades past.